Returning to theaters, and watching Hong Sang-soo’s 2020 The Woman Who Ran at home. 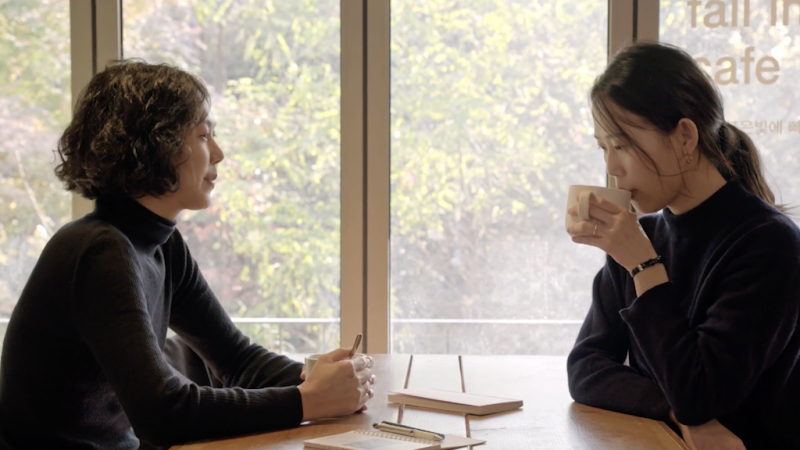 Maybe in 2022, the world will have another uninterrupted year of movies. 2020 got two months in, and 2021 snuck in six on the way out, but now I’m finally back trawling the hallways of a half dozen theaters in Baltimore wearing seven coats and eight sweaters, smuggling popcorn out in a concealed pocket (too embarrassed—a “sicko move” if there ever was one, let alone putting it in the fridge for later). I’m happy to drink it all in again even if nothing so far has blown me away—why should it? It’s been a month. Production hasn’t fully resumed in Hollywood and most other film industries, who knows what the summer will look like beyond Disney’s lineup ripped straight from the aisles of Toys ‘R’ Us, and the event that closed movie theaters in the first place hasn’t even ended yet.

Even if 2022 becomes the first full year of movie since 2019, it’ll still be a mitigated experience (masks here and there, as always, and increasingly, proof of vaccination cards, which, also increasingly, have been rendered irrelevant by the Omicron variant). There will be a lot of stopgap movies that could’ve been bigger but had to scale down, and others that will be clearly produced with plenty of social distancing and barely any extras. It’s also safe to say that most filmmakers are afraid of taking risks or doing anything major right now because who’s going to see it? I can’t even look at the box office returns of 2021’s “highest grossing” movies. Those lists and the incessant reports on them were always obscene, but this is a very bad sign for public exhibition.

And there are still movies that premiered before the pandemic just now coming out, like Hong Sang-Soo’s The Woman Who Ran, which won him the Silver Bear at Berlinale in February 2020. Given the scattershot distribution and delayed release of roughly half of the prolific South Korean filmmaker’s work, it’s hard to tell where he’s at now, considering he’s already made and released three further films. But this is, sequentially, his follow-up to 2018’s Hotel by the River, the first time that decade that his use of black and white cinematography felt essential, and arguably the most dramatic and dark of any of Hong’s movies in the 2010s. The Woman Who Ran isn’t a departure or a detour, but the maturation of a style Hong’s been honing for nearly two decades.

Like so many of Hong’s films, people are unhappy, drunk, passive aggressive, and bitter, and it’s all played for comedy (mostly), but there are no sudden sake showdowns over dinner tables, dares to get naked, accusations of infidelity, or emotional breakdowns. Kim Min-hee returns as a visiting friend to Seo Young-hwa, and most of the film is spent with them, either talking about life, love, happiness, or on their own. A movie theater and a video of a beach recur three times in The Woman Who Ran, acting as the index that Hong loves to split up his movies with. The best part of the movie is when a new neighbor comes over to complain about Seo feeding stray cats, or as the new neighbor calls them, “robber cats.” He insists that his wife is “scared of cats,” and that, “People are more important than cats. It’s an important matter.” Seo stays calm and replies, after a long Larry David-style windup, “But if they’re not fed, they won’t survive. It’s an important matter.”

There are a handful of moments here where Hong breaks through and shows a way forward past this “classic” style. In particular, the stunning long take that contains the entire “robber cat” scene, one which is interrupted by a perfectly placed lens flare in the middle of the take, and one which ends in an amazing zoom-in on one of the cats, mewling at the camera, acting it up every bit as much as MGM’s Leo the Lion. Every shot of the beach, including the last, is extraordinary, particularly when it subtly shifts from the camera filming the same image on a projection screen to a television screen. The view of Kim’s neighbors smoking, distorted and made indistinguishable and beautiful by the low quality of the image. Later, there’s another Hong regular smoking outside in the same spot, and we can only imagine who’s watching, if anyone.

I loved The Woman Who Ran, and it makes me even more excited for the Hong films that have yet to reach America. But I watched it at home, because I had to. I went to see Joel Coen’s The Tragedy of Macbeth last week, and even though the approach and the acting was superb, try as I might, I slipped out for some light with half an hour left and walked back in when Frances McDormand, as Lady Macbeth, was lying in a long shot on the floor, dead. A bit too tired for Shakespeare, but I brought my popcorn home.