The Center Left is Revolutionizing Podcasts

Director’s Commentary and The Adam Friedland Show represent a major step forward, a reimagining of what podcasts could be. 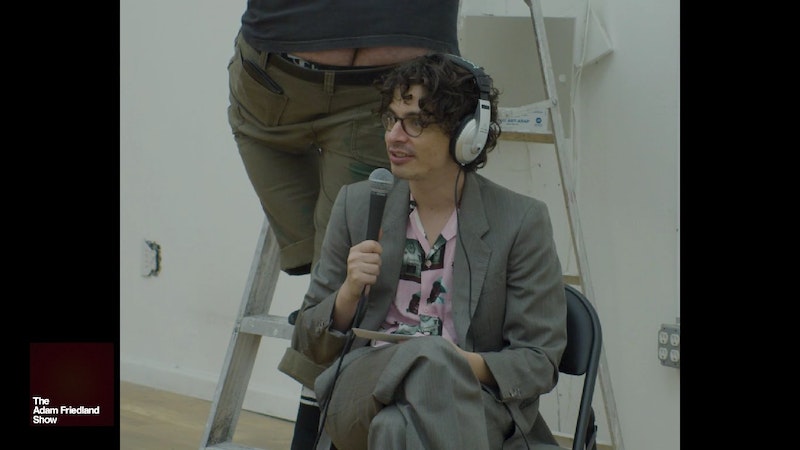 No filmmaker understands the internet better than Eugene Kotlyarenko. He floods the frame with as much visual information as possible, simulating the spectacle of life online with an authenticity few others have achieved. Wobble Palace opens by paraphrasing the years-long relationship of its two leads (Kotlyarenko and Dasha Nekrasova) through a barrage of onscreen text messages. His follow-up, Spree, takes this approach several steps further, crafting a split-screen assemblage of live streams, viral videos, chat boxes, and surveillance camera footage into a feature-length gonzo slasher masterpiece. Present in both these films, as well as Kotlyarenko’s music videos (Sophie Royer’s “Hollywood Walk of Fame,” Juiceboxxx’s “Coinstar Song”), is the dissonance of life with one foot in the tangible world and one in the digital ethers.

Unsurprisingly, Kotlyarenko has a heavy online presence. He posts on several social media platforms more or less daily and curates an online monthly movie club. This year, he expanded this presence to include a new podcast called Director’s Commentary in which he invites other directors to discuss movies, the business, and whatever else they desire. Guests include established directors like Crystal Moselle and Alex Ross Perry (whose industry-focused episode is a highlight) as well as emerging filmmakers like Nekrasova, Amalia Ulman, and Cody Critcheloe.

Director’s Commentary is available for free as audio, but given that Kotlyarenko is a visual artist, I’d argue the Patreon-only video versions are worth the extra $5 a month. Kotlyarenko uses the video format differently than most other video podcasts. There’s no stuffy studio, nor expensive microphones. Episodes usually consist of Kotlyarenko in his messy bedroom, interfacing with his guests long distance over Zoom. Occasionally, he goes off-format, like the 11th episode “Cannes Rehab,” in which he reports live from the 2022 festival (highlights include Owen Kline drunkenly hamming for the camera and Jeremy O. Harris giving a very casual interview from a hotel bathtub). Or consider his recent interview with Amalia Ulman which, unlike other episodes, takes place in one location. Rather than shoot the interview conventionally (a two-shot interspersed with medium shots of Ulman), he splits the screen for the duration of the almost two-hour interview between the two-shot and the medium shot. This simple choice in editing, combined with the usual inclusion of film clips (which often bisect the space between Kotlyarenko and Ulman), creates a visual dynamic that demands attention. Unlike his films, it doesn’t wash over the viewer in a bombardment of visual stimuli; it clarifies the material and engages the viewer in a way podcasts, consumed passively in most cases, rarely do.

It’s a work in progress, and much of the fun of The Adam Friedland Show, at least in its nascent form, is the evident gap between its ambitions and its reality. Friedland and Mullen rented an expensive Manhattan office space in which to build a studio, but each episode finds the space in increasingly cluttered stages of renovation. With characteristic confidence, Mullen boasts that his host will be the biggest talk show figure in the world one day, while Friedland is rarely able to read an entire joke without stumbling over a word. (Mullen’s gentle reassurances after these flubs are inexplicably funny.) Each episode ends with a promise that something special is coming very soon.

This week’s episode, “Don’t Tell Daddy” (co-directed by Friedland and Kotlyarenko), is the show’s first major departure, the “something special” they refer to. After dedicating the show to both Queen Elizabeth II and “the countless victims of colonialism,” it opens like several other episodes, with Friedland making his way to the studio with a skip in his step. When he arrives, he finds the space littered with empty liquor bottles, cocaine, used condoms (he tastes one and concludes, “It’s Nick”), and a gun. Friedland assumes Mullen has finally committed suicide, and after a musical number celebrating that the show is totally his, he begins his search for a new co-host. (Possible replacements include comedian Eric Rahill, a 14-year-old girl, a Japanese guy, and director Mike Bilandic, who it turns out is just returning the studio’s bathroom key after his previous appearance on the show.) The episode feels less like a podcast and more like a short film, and passively consuming it means missing out on all the visual jokes, like one guest’s baby playing with a long strip of magnum condoms, or the wide-shot reveal of Nekrasova (Friedland’s ex) as a possible replacement for Mullen. (The visual gags aren’t limited to “Don’t Tell Daddy.” One scene in an earlier episode opens with Mullen in hair curlers reading a book by James Carville called I’m Gay.)

Director’s Commentary and The Adam Friedland Show represent a major step forward, a reimagining of what podcasts could be. In an artform that seems designed to soothe us through daily routines, it’s refreshing to see artists who seem intent on shaking us out of them.