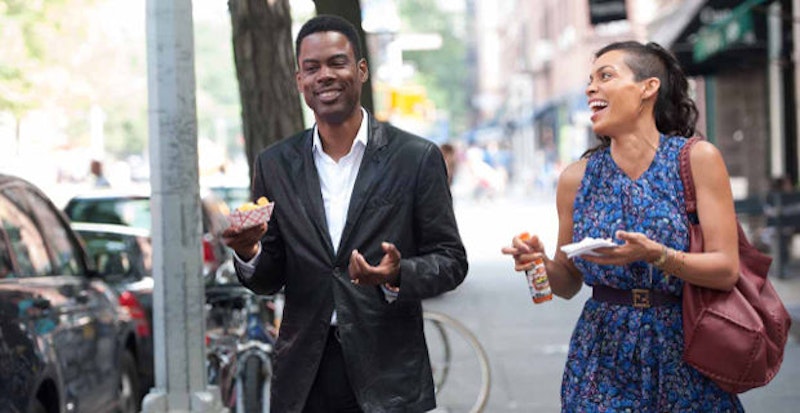 Top Five is a movie that Aaron Sorkin would half love. The West Wing auteur would adore the half that consists of characters walking, talking, arguing at and beyond one another, feinting, equivocating, but might be iffier about the picture’s more emotional, less politically-correct half—the far ickier stuff about race, masks, authenticity, alcoholism. Chris Rock, who directed and stars in Top Five, helms a fiction about fictions: about the ways in which we deceive both ourselves and others, how self-doubt can cripple ambition, how indifference can be misread as concern through a veil of vulnerability.

Andre Allen (Rock) is an actor on the downside of a schlocky career: a former comedian who disdains stand-up and is engaged to marry a materialistic reality television star (Gabrielle Union, in a thankless role). His new film, Uprize, about the Haitian Revolution, is meant to symbolize a shift into serious cinema and away from the Hammy the Bear series, where Allen donned a bear suit to fight crime alongside Luis Guzman, or something. Allen, on a soul-deflating Uprize media junket, spends the day with Chelsea Brown (Rosario Dawson), a New York Times reporter assigned to write a profile about him.

I’ve always been more impressed by Rock as a persona than as an actor or comedian; Top Five left me respecting him as a writer/director. The pacing here is natural, the framing measured, the humor humanistic and generous without being bombastic to the point of overwhelming what is by and large a drama. We’re fed just enough of Uprize to grasp its earnest ludicrousness and just enough Hammy to a) grasp that franchise’s sell-out pandering and b) help justify the taunting hollers of Haaaaaaammmmy that dot Top Five like land mines. The lurid gratuitousness of extended flashbacks too delicious to spoil is somehow grounded by everything else at stake here.

Union’s character is undeniably loathsome, but neither Rock nor Union allow her to lapse into a cartoon or a caricature, while Dawson plays the Cinderella-fixated, pseudonym-yoked Brown as Allen’s equal number: a quip-dispending façade disguising intense uncertainty. This duo lunging, parrying, and unpeeling one another like onions—about everything under the sun—is Top Five’s heart and soul; the rest is gravy. It’s a blue-ribbon winning gravy, at that: the list of indelible cameo appearances here is as long as my arm, and to rattle them off would ruin some of the fun. The biggest revelation, though, might be Rock himself. He’s certainly never been—or presented himself as—a master thespian, but the role he wrote for himself allows him to riff within his limited range, a freestyle slurry of taciturn indignation, studied outrage, offhand invective, and injured pride. It’s catchy enough that you’ll want to hum along.