On Breaking Bad, Happy Endings Are Reserved for the Dead 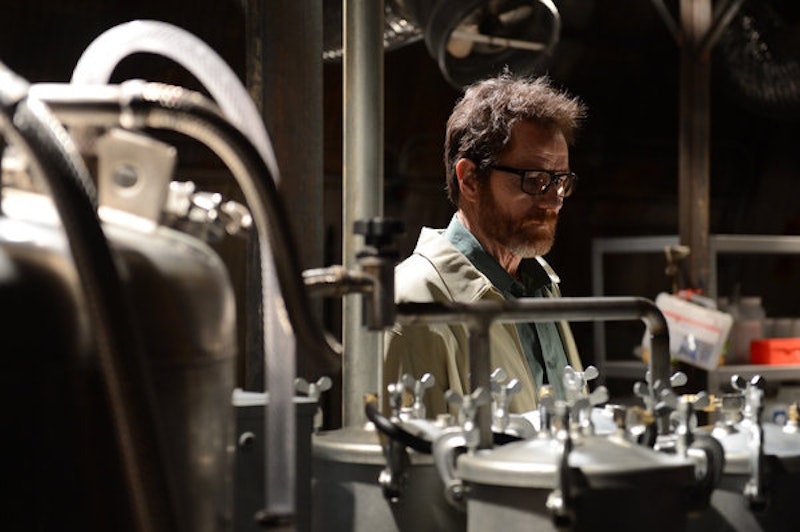 I should’ve been crying, but I was smiling. I’d spent the past two months ravaging fan forums, re-watching key episodes, and over-analyzing every character interaction and plot point as I developed my theories and predictions. The night before the Breaking Bad finale, I texted my fellow fan buddy back and forth. I was ready to have my emotions torn to shreds. This led to the man who had become my obsession lying blood-drenched on the floor of a meth lab. I felt strangely pleased about it.

There are few characters in pop culture as polarizing and frustrating as Walter White. He was designed to make audiences fall in love with him and then gradually transform that emotion into a strange blend of disgust, hatred, and pity. Creator Vince Gilligan pitched Breaking Bad as the transformation of one man from “Mr. Chips to Scarface” and I think he wanted to create a similar change with his audience. You could root for Walt and feel a little sick for doing so. You could choose to hate him and be constantly blindsided by his deeply human moments. Or you could accept him for what he was, a good man with a tragic flaw.

If you chose to hate him, then justice was served last Sunday night. As he fell to the ground and Badfinger started belting out “I guess I got what I deserved,” the story ended with a bad man paying for his actions. But what’s unsettling about the show is that if you were in the pro-Walt group, you were still rewarded.

No one really wins in Breaking Bad. Just about everyone who watched the show could see that coming. The major characters that survived the five seasons include two orphans, two widows, and a young man with no realistic prospect of a promising future. The wake of Walter White pulled everyone down with him, and those who were able to pop up for air were still broken.

In the universe that Gilligan created, happy endings are reserved for the dead.

Each of the main characters who were killed in the show died almost immediately after accomplishing a goal that had consumed his life. Mike Ehrmantraut had given his money to his granddaughter. Gus Fring had successfully destroyed the family of the man who betrayed him and was able to taunt him one last time. Hank Schrader caught the criminal he had been obsessively pursuing and the last thing he saw before he died was that man as a prisoner in handcuffs. Walt died in a laboratory, cementing his legacy in the production of the blue meth.

And each character died with a form of grace. Mike stared at a sunset. Gus stood tall and straightened his tie before he fell to the linoleum. Hank was able to deliver one final line of defiance before a bullet entered his skull. Walt left with a smile.

So did I. Despite all the evidence telling me I should hate him, I never did. In many ways, White resembles a character from a Coen Brothers movie, a morally ambiguous but relatively good-intentioned man caught in a chaotic world, trying to survive. Even at his Heisenberg peak, one gets the sense he never really knew what he was doing. He was a blubbering mess when trying to maintain lies to his family. He constantly relied on his lawyer for help. He improvised. Even when he was dark and intimidating, you could tell that it was a defense mechanism. He was a scared animal baring his teeth to protect himself.

That’s what made his death redemptive. Some critics complained that the series finale was too straightforward. Gilligan didn’t pull any of his usual twists or surprises and everything that was supposed to happen, happened. But this was the perfect way to end the story of Walter White.

Walt had done irreparable damage to himself and his family. His mistakes had reduced him to nothing but a feeble dying man in a mountain cabin. He’d alienated everyone he had ever known. When he returned to Albuquerque, he was little more than a walking ghost making his final rounds. But for the first time in the series, everything went according to his plan. He was in total control. In death, he won.