It's Always The Worst Day Ever On Hardcore Pawn

The logic of this show is so warped that it's cartoonish. 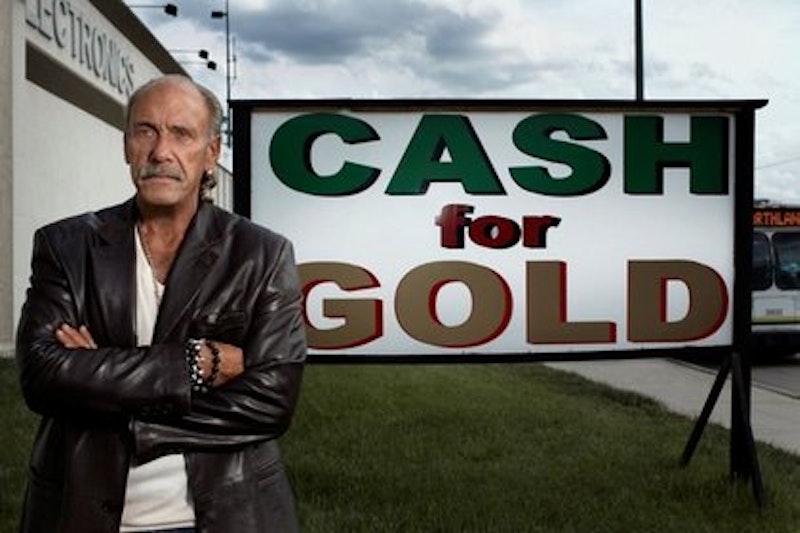 Desperation is a prime driver of American economic life, fueling a rainbow spectrum of enterprises legal, semi-legal, and illegal. The pawn shop is probably the most parasitic of these, preying on the hungry, the fiends, those bound and determined to stunt beyond their means. I've been to a few in my life, and those experiences were uniformly soul-destroying; the places reeked of wariness, despair, and violence, of other people's dreams on layaway. My immediate reaction was revulsion, a desire to get away as soon as possible; the only retail establishments I can remember eliciting similar responses are Goodwill outlets.

One of saving graces of Pawn Stars is that the show makes the pawn business look fun, thoughtful, and intellectually stimulating, with its parade of niche subject-matter experts, Chumlee's bumbling-savant poker facing, and good-natured ribbing all around. If something's a run-down piece of shit, there's a chance the store will buy and restore it (a pursuit which has jump-started a couple of spin-off series), and no one's trying to rip anyone off too dramatically; the marked lack of belligerence is likely due to judicious editing, but the hanging out with Uncle Rebus on his porch and learning about obscure stuff mood makes up for any lapses in reality. Also, Pawn Stars makes working in the pawn business seem entirely reasonable and wholesome, like pulling down shifts at Wal-Mart or peddling Fords on a car lot. It doesn't even seem like work—just a bunch of schlubs who lucked into an easy career shooting the breeze in Las Vegas while coming off way, way more legit than those hicks on Duck Dynasty.

Hardcore Pawn takes a spiked sledgehammer to this fantasy, then shatters the pieces; there's never a moment on that show where you will envy anyone for any reason, unless you're a Tourette's sufferer or certified rageaholic. The program chronicles the life and times of the Gold family—patriarch Les, and his children, Ashley and Seth—as they toil day in and day out at American Jewelry and Loan in the rotting heart of Detroit, the most doomed city in the United States. Pawn Stars patrons are locals or tourists looking for extra cash to wager at the casinos, wheeler-dealer lifers for whom pawn jousting is a kind of sport; Hardcore Pawn patrons are almost uniformly struggling to survive day-to-day, which means running bald-face hustles on pawn pros, ganking valuables from loved ones to sell, and flipping the fuck out at the drop of a check slip. Yelling and screaming and threatening is a pastime here, from the customers blowing up while trying to retrieve merchandise they didn't retain the receipts for to other customers erupting because the merchandise they're trying to sell is contextually worthless to the Golds whaling on each other or their screw-up employees. People are constantly escorted out by hulking bodyguards, and roughly 55 percent of them are baldly playing to the cameras.

This makes for exhausting viewing—attempts to laugh off grandstanding and scenery chewing feel as fake as the sob stories some people cook up—and the American Jewelry and Loan staff are inexplicably stoic in the face of the sort of insults and terroristic threats that had NYC's finest chasing Ol' Dirty Bastard for months a decade and a half ago. You wind up feeling sorry for everyone in this situation—fleecers and fleeced alike, and wishing that somehow income equality were an actual thing, that nobody had to pawn a 20-inch flat screen for two weeks for a paltry loan, then come back to find out that the thing has been sold off or wrecked, that the conventional rules of comportment applies universally. The logic of this show is so warped that it's cartoonish.

Imagine that you went to the deli counter in search of your favorite brand of honey ham, but the deli was out of it. In all likelihood, you’d express a sort of muted disappointment and then select something else. On Hardcore Pawn, when it turns out that the watch someone sold you for $500 is really worth $50 and the person behind the American Jewelry and Loan counter informs you of this, you take out your embarrassment and sense of betrayal on the person behind the counter by insulting that person's family, workplace, and right to exist at a 100-decibel volume, gesticulating like a maniac, acting the fool. Like Jerry Springer or the WWE, it's numbing spectacle that makes you fear for humanity.