Brian De Palma’s The Bonfire of the Vanities (1990) is a compromised masterpiece, more than a criminally overlooked curio.he told Charlie Rose in 1992 the Panda Bear song 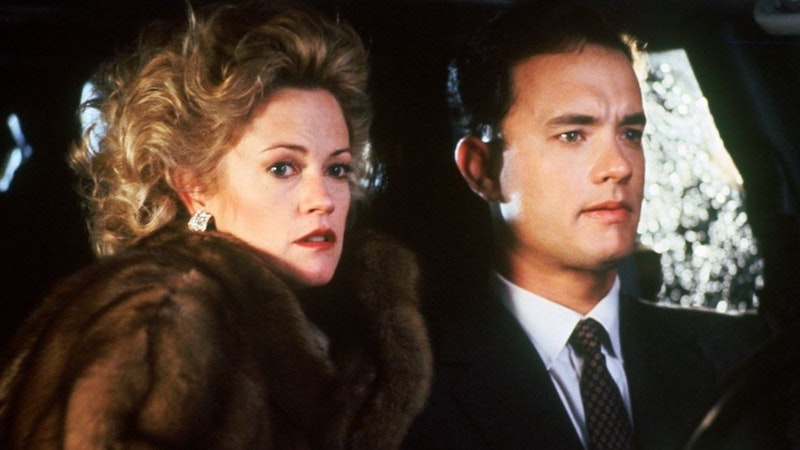 Brian De Palma’s career could’ve gone one way at the end of 1990, and he might’ve had a middle-aged commercial renaissance like his friend Martin Scorsese, but The Bonfire of the Vanities eliminated that possibility forever. There was Mission: Impossible in 1996, a fantastic action movie and the biggest hit of De Palma’s career, but besides that, he’s been on the outside looking in since Bonfire bombed 31 years ago. Now 81, he probably won’t make another movie, with the publication of his first novel last year (Are Snakes Necessary?, co-written with Susan Lehman) a sad signal that his directing days are over.

Scorsese was in a similar place in 1990, and his trajectory up to that point matched De Palma’s closely: in the 1970s, a mix of cult hits (Sisters; Mean Streets), legendary hits (Carrie; Taxi Driver) and relative duds (The Fury; New York, New York); in the 1980s, commercial failures now considered classics (Blow Out, Scarface; Raging Bull, The King of Comedy), more cult favorites (Body Double; After Hours), along with straightforward studio fare like The Untouchables and The Color of Money.

The films De Palma and Scorsese made at the end of the 1980s were dream projects they’d been trying to get made for decades: Casualties of War and The Last Temptation of Christ. Neither did well, but Scorsese’s “blasphemous” film generated a significant amount of press and protest, while De Palma’s bracing Vietnam drama went with the wind. No one saw it, no one talked about it, and hardly anyone remembers it. De Palma later said, “It might’ve been too late,” and he’s probably right: Oliver Stone’s Born on the Fourth of July, released six months after Casualties in 1989, was the last Vietnam film of the cycle that began with Stone’s own Platoon in 1986. Even Full Metal Jacket was criticized for coming “too late” in 1987, but like all of Kubrick’s work, it has endured in pop culture. Casualties of War has not.

Pauline Kael might’ve written a stellar review, but otherwise the movie died, and De Palma was deflated and probably a little insane. He was desperate and needed a hit, something more cynical, less personal. “Making The Bonfire of the Vanities was a risky proposition,” he told Charlie Rose in 1992, “and I still say that this movie is a movie that I like—it is not Tom Wolfe’s The Bonfire of the Vanities.” Rose and De Palma spend the first eight minutes of the show, ostensibly an appearance promoting Raising Cain, to go over the “disaster” of Bonfire and, in Rose’s words, “what the hell happened?”

I haven’t read Wolfe’s novel, but I never found the movie confusing, unlike John Crowley’s 2019 adaptation of Donna Tartt’s The Goldfinch, another long book I haven’t read. Tartt’s novel spans decades and dozens of locations, while Bonfire of the Vanities, abundant with subplots and characters excised from the movie, is constructed around a straightforward story of hit and run. It’s not an impossible adaptation.

Sherman McCoy (Tom Hanks) is a bonds trader on Wall Street, a “master of the universe” with an opulent Manhattan mansion, a beautiful wife and daughter (Kim Cattrall and Kirsten Dunst, in one of her first roles), a Southern Belle mistress named Maria (Melanie Griffith), smiling, naive, guileless, high on life. He’s a far cry from the McCoy of the book, an arrogant aristocrat who should’ve been played by William Hurt. Bruce Willis plays a drunk journalist named Peter Fallow, a bum about to bottom out when Sherman and Maria accidentally hit a Black kid in the Bronx and drive away, leaving him with a concussion that sends him into a coma. The film begins with a five minute Steadicam shot of Fallow arriving to the launch of his book The Real McCoy and the Forgotten Lamb, released only a year after that car took a wrong turn into the Bronx.

Promoting Snake Eyes in 1998, De Palma told Mark Cousins that, “When I was out promoting Greetings, a very ‘radical’ view of what was going on in America at the time, I found myself on programs much like this, and I’d be talking about ‘the revolution’ and ‘why are we in Vietnam?’ and one seemingly radical political idea after another, and then they would cut to a commercial and somebody would come on and say ‘Buy some Evian! This is really great stuff, it’ll make you feel really good! Now let’s get back to Brian De Palma discussing the revolution.’ So as you can discover in America, no matter what it is, your political views, you just become a part of the selling machine, so it doesn’t make any difference. No matter how radical you try to be in order to try to change the system, capitalism has found a fascinating way to deal with that, which is just to make you rich.”

De Palma could be describing Reverend Bacon, an obvious Al Sharpton caricature, or any of the supposedly “benevolent” leaders and players of New York that use constituencies and individuals like McCoy and Lamb for their own power games. McCoy becomes dinner for the whole city: D.A. Abe Weiss (F. Murray Abraham) rails against protestors claiming “white justice,” Reverend Bacon (John Hancock) sucks the blood and money out of his congregation, including Henry Lamb’s mother, and the media who see the story heaven sent: a WASP on Rikers? Headlines and features for months.

All of these people are using this tragic situation to their own advantage, all while telling the public that they’re doing it for the right reasons and the right people. Weiss has to get reelected, Bacon needs more airtime, and the media need something to write about. In The Bonfire of the Vanities, “the selling machine” sells human beings.

Right in the middle of the movie, there’s a split screen sequence that blends the political comedy of Hi, Mom! and Greetings and the political corruption of Blow Out and the social horror of Sisters and Carrie. As a choir sings by a vigil on one side to the viewers at home, a Steadicam shot shows Bacon and Geraldo Rivera gossiping and wheeling and dealing off camera, while giving us a full view of the scene, showing how much has been left out, obscured, or distorted for the television audience. De Palma has always said that split screen is best used as counterpoint, and there isn’t a better use of it in all of his other films.

De Palma’s decision to convey the book’s vicious spirit via an extreme and rococo visual style—his beloved split diopters, wide angle lenses, overheated lighting and over saturated colors, split screen, cameras twisting from the ceiling and up from the floor—is the only one of the things that makes Bonfire worthwhile and more than a curio for fans. The avariciousness and garish aesthetics of the 1980s, along with the appalling racism of Reagan era America, is pilloried here, but even still, the way this movie depicts people in the Bronx is insane: a war zone stalked by marauding drug addicts in track suits. The skewering of WASP’s is much closer to life (McCoy’s landlord kicks him out when the protests get too bad: “There are Black people outside—with basketballs!”)

Bonfire’s view of Black people in the Bronx remains offensive, even if it’s precisely how McCoy and mistress Maria would see the borough. When Maria asks, cowering, “Sherman…where are all the white people?” we are obviously supposed to laugh. Later on, it’s obvious that we’re supposed to be horrified by McCoy’s social set surprising him at home with a party after he’s beaten an indictment and done well on TV. This is all his wife Judy cares about: image, status, money, and power. When Sherman becomes too much of a liability, she leaves him, never to return. With his back up against the wall, Sherman lies about recording a tape that implicates Maria, and after playing it for the court, he’s exonerated. Of course he didn’t make the tape himself, it was a bug, making it inadmissible in court, but as his father (Donald Moffat) tells him, sometimes lying can be the right thing to do.

What prevents Bonfire from being De Palma’s masterpiece are the concessions to accessibility, namely Bruce Willis’ voiceover. Kubrick’s 1962 adaptation of Lolita bombed, and De Palma was convinced that it was because James Mason, the lead and narrator, had a British accent. So he insisted that Fallow be played by an American. He should’ve ditched the voiceover in the first place! Besides being poorly performed, it’s unnecessary: the story has been condensed enough as is, and it could’ve been understood just as well without Willis’ awful, clichéd line readings on top. Along with that, Dave Grusin’s score is far too bright and triumphant for such a dark, complicated story. The movie only really slides off the rails in the last 20 minutes when it’s clear that an enormous amount of material has been compressed for time’s sake.

But for a film so well known for its “bad ideas,” there are remarkably few for unbiased, open eyes. Paraphrasing Steven Spielberg, a number of directors could’ve made Bonfire: Sidney Lumet would’ve focused on the trial, Sydney Pollack on the romance, Martin Scorsese on the racial dynamics in the city, and Stanley Kubrick would’ve pulled off everything De Palma tried and more. This is a media satire, and every character and every insane thing they say must be put in the context of daily newspapers and tabloids in the 1980s. For someone obsessed with televisions and distorted perception, Bonfire of the Vanities made perfect sense.

Since 1972’s Sisters, De Palma didn’t make any explicitly political films until The Bonfire of the Vanities. More than 20 years after Greetings and Hi, Mom!, two of the most scabrous and underrated American political films of the late 1960s, nobody remembered that De Palma began by critiquing, satirizing, and the media and its exploitation of individuals. There’s a direct line from Greetings to Bonfire.

The “Be Black Baby” section of Hi, Mom!—where a bunch of white dilettantes from Uptown go to an interactive play in an underground theater and end up getting assaulted, their faces painted with shoe polish by Black Panthers, some of them raped, and finally mock executed as they scream about being sorry for being Black. They are brought through the Black experience in America going back to the 17th century. The 20-minute sequence ends with the white participants being asked for their response and telling the camera that it was eye-opening and inspiring and beautiful. This was all shot in real time on black and white 16mm film.

In Bonfire of the Vanities, there are three-minute scenes that cost $75,000. I think about Scorsese and Goodfellas, which also tested poorly but got great reviews and played for months and months, and how De Palma’s career could’ve gone if Bonfire wasn’t a spectacular public failure. De Palma has made many “returns to form” since then—Raising Cain, Femme Fatale, Passion—and one big hit, another flop, but since 2002, he’s stuck to European productions. In other words, he’s been in the dog house for my entire life, and he’ll likely die before he’ll ever make another film. All because this one movie failed.

And I still say that this movie is a movie that I like—it is not Tom Wolfe’s The Bonfire of the Vanities.