White Noise is a gorgeous-looking satire more than 25 years out of date. 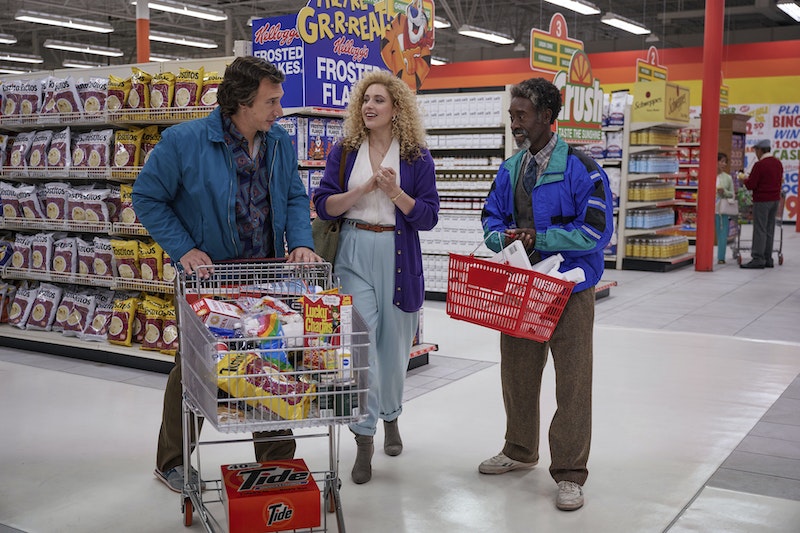 Noah Baumbach has made one great movie: 2010’s Greenberg, starring Ben Stiller as an asshole misanthrope and Greta Gerwig as the girl he falls for (so did Baumbach: they’ve been together ever since). Greenberg begins as a typical Gen X comedy, but quickly turns into something much darker when you realize this character, and this kind of comedy, were long extinct before 2010. Greenberg’s surrounded by young people he can’t relate to at all, and instead of endearing himself to anyone, even the audience, he punishes his surroundings. Greenberg’s a short, fast-walking twig brimming with resentment, anger, arrogance, and lust. It’s the most unsettling performance of Stiller’s career, and the movie is notable for never redeeming Greenberg, or even shading his antipathy towards everything. He isn’t self-deprecating like Woody Allen’s nicer characters (Alvy), or even the furious ones (Harry). In his films, Allen’s too much of a motormouth to ever really be threatening, whereas Stiller is usually a bit too chilly. Here, Baumbach delivered one of American cinema’s most scathing indictments of Generation X, its attitudes, preoccupations, and hypocrisies.

If he hadn’t made all of these other terrible films, I wouldn’t assume that Greenberg is an unintentional indictment, but I can’t help it. Frances Ha? Mistress America? Kicking and Screaming? Marriage Story? Whit Stillman is still alive, and occasionally making movies! I wish he were in Baumbach’s position, but as it stands, the latter got to film Don DeLillo’s White Noise for Netflix. Like Glass Onion, the movie played in a few theaters in November, but because of the Parkway’s imminent indefinite closure, it never had a chance to screen in Baltimore, unlike Alejandro G. Iñárritu’s Bardo or Lena Dunham’s Catherine Called Birdy (distributed by Amazon).

I never got through DeLillo’s novel, and what I did read I found decades outdated, and stylistically, I couldn’t get into it, unlike Infinite Jest, which remarkably hasn’t aged that much at all. The core of David Foster Wallace’s novel is addiction and recovery, and its predictions of future behavior and phenomena in American life have largely borne out. The mechanism of tapes may be obsolete, but it’s hard to argue that the “Entertainment” driving that book is a perfect analogy for streaming, which didn’t exist when Wallace committed suicide in 2008.

Baumbach’s adaptation is, unfortunately, gorgeously-costumed, lit, shot, designed, and choreographed. It’s a relatively long movie that zips by on the power of its kaleidoscopic images and hyper-saturated reality, burying even the endless, inane dialogue presumably ripped from the book. White Noise has some of the most fantastic color digital cinematography, a movie with widescreen color visual depth like Miranda July’s overlooked Kajillionaire. In certain scenes, and with particular shots, Baumbach also comes closer to evoking the late Robert Altman than Paul Thomas Anderson ever has; specifically, the first time we see Gerwig throw out an empty pill bottle of “DYLAR,” and after cutting between at least three different conversations, all filmed with telephoto lenses, the camera quickly dollies and zooms into the trashcan as she tosses the bottle, cutting back to the conversation seamlessly. This is really the first time I’ve ever seen Altman brought back to life by another director, however briefly and, perhaps, falsely.

I’m pissing around it because White Noise is simply obsolete. DeLillo’s satire, at least as adapted by Baumbach, is at least 25 years out of date. This is a movie that would’ve made perfect sense in 1999, or any time before 9/11. That disproved the town’s head-in-the-sand reaction to the “Toxic Airborne Event.” The rest of the country might’ve been out to lunch, but in New York, DC, and Pennsylvania, the mass media and frivolous consumption culture disappeared immediately and didn’t really return for a few years. George W. Bush told the country to “go shopping,” but when New Yorkers had our own “airborne toxic event” to deal with, no one was spouting gibberish in blood banks or on street corners. Yes Don, real death and real carnage will shake even the idiot American out of their constant consumption zombie lifestyle—if only for a few years.

But then the economy collapsed! 2008 and the Great Recession officially rendered White Noise useless as satire, a book for fans of DeLillo that got everything about the American culture it oh so astutely diagnosed and parodied completely wrong. If anything, DeLillo’s rendering of the supermarket as the secular temple is optimistic today, as grocery store shelves become sparser and people lack the means to “enjoy these idle, aimless days.” The chaos is so constant that a “Toxic Airborne Event,” like the coronavirus pandemic, would probably be welcomed by many of the same healthy people who still wear masks everywhere they go. When you start to lose even your material possessions and comforts, a disaster might sound appealing. Better to burn out than fade away is the attitude in the air right now, and despite featuring some of the most beautiful production design this year (that green visor!), White Noise is terminal due to the source material, no matter how well Baumbach made it look.