Andrew Callaghan's This Place Rules is a good documentary about how political extremists in every direction are all hucksters. 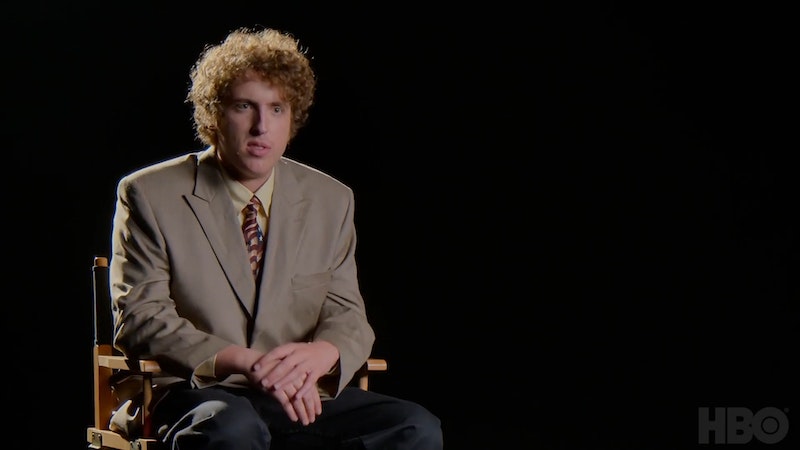 The premise of This Place Rules—a gadfly documentarian spending the year 2020 filming himself on a nationwide tour of rallies, protests, and the homes of extremists, interviewing crazy people, and ultimately trying to come to a conclusion about who we are as Americans today—has been done about a half-dozen times, and usually not very well.

So why is This Place Rules a nearly complete success, in a way that Alexandra Pelosi's terrible American Selfie wasn’t? It's mostly because it doesn't take itself too seriously, reaches a conclusion that mostly makes sense, and it's hilarious. Also, its director and star, Andrew Callaghan, is a huge talent—a Michael Moore-type who's not nearly as smug and has a sense of humor.

This Place Rules, which debuted on HBO and HBO Max just before the new year, is the brainchild of Callaghan, 25, a wild-haired documentarian/journalist who comes from the Tim and Eric orbit. More than most of the previous, similar docs, This Place Rules owes a lot to the Sacha Baron Cohen tradition. And like Borat, Callaghan wears the same suit all the time—even, in the film's best sight gag, when he's under the covers after a Covid diagnosis.

Callaghan's premise, of aiming the camera at the craziest people he can find and just letting them talk, can be dicey, but he gets great material from his subjects. It's the sort of MAGA conspirators you're probably used to seeing from this type of project, but the film also finds some standout characters, like a YouTuber who thinks he's the Joker and a guy on a street corner in DC who rants about circumcision.

The doc spends a lot of time with the Proud Boys, and in its most chilling segment, Callaghan talks to a young kid who's been brainwashed into QAnon by his parents. And in a part that's already gone viral, an online MAGA goon accuses a long list of Democratic and Hollywood types of pedophilia, before he's confronted with his own arrest record for a similar crime. There's also a segment with Alex Jones that gets funnier content out of Jones than any mainstream project has, even Richard Linklater. The notorious conspiracy monger sits for an interview, appears to admit sexual attraction to Callaghan, and, during an incongruous weightlifting session, sits on a bench and it breaks it in half.

The documentary flirts with taking a both-sides approach, and segments involving Antifa members mostly depict them as communists and anarchists who care little about Joe Biden, the Democrats, or democracy in general. But Callaghan's ultimate takeaway is noticing that all of the loudest extremists, from Jones to the Proud Boys, seem to be using political radicalism to sell stuff.