I see some stinkers, but usually not on purpose. 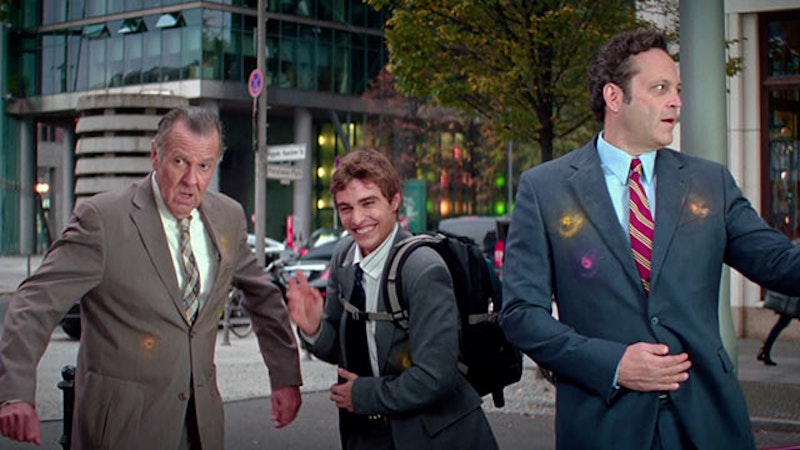 I was reading a film review in The Spectator the other day by Francesca Steele and almost stopped after this corker: “Stateside critics… may be unaware of the ability of the British to enjoy a film so bad it’s almost good.” Come again? I’m not of that mind, but this peculiar activity is so common in the U.S. that there are probably 80 websites dedicated to the pleasures of watching awful movies. My own kids throw out that line on occasion, and when I ask why they’d waste their time on an artistic travesty, they shrug, as if to say, “If you have to ask…”

In the last couple of years my movie habits have changed: once rather particular, going to a theater’s become a weekend activity, and even if the picture is awful, it’s fun to be with the family and, pro or con, chat after about what we’ve seen. My wife grew up in Los Angeles, so as a youngster frequent movie excursions were on the docket; I guess after all these years, it’s rubbed off. One caveat: unlike Melissa and our boys, I can’t abide a second viewing of even a great film—say, Calvary or Boyhood—not even several months after seeing it for the first time. My son Booker saw Birdman three times in the space of two weeks, which I just don’t get. The only time I’ve ever done this was in 1986: I saw Blue Velvet in Montreal on a Friday, and the next day, back in Baltimore, went again.

In any case, last Sunday, Melissa, Booker and I went to Harbor East’s Landmark for the roundly panned Unfinished Business, starring Vince Vaughn, who hasn’t made a notable appearance since he was money in 1996’s Swingers. Quick plot summary: a small company, headed by Dan Trunkman (Vaughn) travels to Germany to close a make-or-break deal. Trunkman’s two employees, Timothy McWinters (played by the excellent British actor Tom Wilkinson, in an obvious cash grab) and the slow Mike Pancake (Dave Franco) are along for a trip that presents one roadblock after another, each more silly than the last. Not surprisingly, Unfinished Business is a box-office bomb (although it’ll probably, when all’s said and done, earn back its promiscuous $35 million budget), but at least it was only 91 minutes long. Any redeeming features? Not really, although Franco’s character—and I’m surprised there hasn’t been an uproar about his portrayal of a de facto “mentally-challenged” young man, but I suppose those who track such pop culture offenses didn’t think this was worth the bother—was given a few funny lines. Meaning I got two or three chuckles for the $8.50 matinee fare.

But it was hardly a lost afternoon. After all, I had a fun gab with the bubbly ticket cashier, a gal we see a lot, and I laughed when she said, “I just love your sweaters, they look so warm!” I explained that the Landmark is, unless a screening auditorium is packed, so freezing that even in summer on a 90-degree day I have to put on the layers (which in July causes onlookers to do a double-take, and some judgmental freaks probably think I’m on the spike). She agreed, but was happy (or at least feigned happiness) when I remarked that our family was partial to the Landmark and Charles Theater, as opposed to the Baltimore Country iceboxes where you’re forced to endure at least 20 minutes of trailers for films that are as bad as Unfinished Business.

Nothing more to report! Unfinished Business was the worst movie I’ve seen since anything that stars Kevin Costner. It was so bad it was bad.