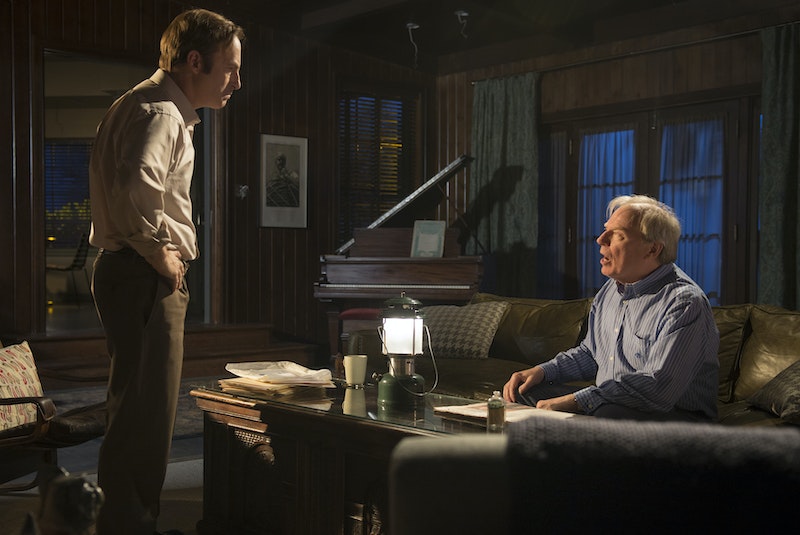 Better Call Saul opens in B&W. True to his own prediction, Saul Goodman, having fled Albuquerque in the final episodes of Breaking Bad, is, if not managing, at least working in a Cinnabon in Omaha. I think we'd all rather know what happened to Jesse, but this isn't his show.

Spinoffs are hard. Saul was rarely more than comic relief on Breaking Bad—the shyster lawyer who got Walt and Jesse out of plenty of jams, for a decent percentage. He was an archetype; he didn't require backstory. And yet here we are, finding out how Jimmy McGill got to be Saul Goodman (as explained in an early flashback, the name itself is a punchline, "S'all good, man!").

Right away, we recognize Vince Gilligan's Albuquerque—strip malls and scrub brush. Tons of wackos out there in the New Mexico desert. The Breaking Bad aesthetic is here, as is most of the writing staff. And though Bob Odenkirk's a fine actor, Gilligan & co. must’ve recognized that a show with just Saul would never work, and so we're very quickly re-introduced to some other familiar characters: Mike (here, the parking attendant for the district court) and Tuco (a low-level meth dealer). And while Tuco's only around for the first couple of episodes—part of a side plot about a couple of skateboarders and a quick cash scam—it looks like Mike will have legitimate screen time.

It's 2002, roughly six years before Saul (henceforth, Jimmy) meets Walt and Jesse. His brother Chuck was a partner in a successful local law firm, Hamlin, Hamlin & McGill, up until about a year and a half before, when he left due to "electromagnetic hypersensitivity." Chuck spends his days at home, in the dark, wrapped in a protective blanket. When Jimmy visits he's forced to leave his cell phone, watch and keys in the mailbox.

Jimmy is a lowly public defender, desperate to break out on his own and earn his brother’s respect, who maybe still thinks of him as "Slippin' Jimmy," the Cicero kid who made his money through low-level cons. Unfortunately, legit work is hard to come by. And as Betsy Kettleman, wife of the county treasurer who embezzled $1.6 million tells him, "You're the kind of lawyer that guilty people hire."

Unlike Walt on Breaking Bad, we know how Jimmy turns out. An argument with Chuck about the ethics of advertising is interesting only because we know just how many "Better Call Saul!" commercials will air in the years to come. Maybe because Breaking Bad ended after only five seasons, with most fans having just caught up, thanks to Netflix, everyone was ready to go back to Albuquerque. I don't know how long Better Call Saul can last (FiveThirtyEight did a recent breakdown on spinoff runs), but with the highest rated cable premiere ever, and a two-season guarantee, it's going to be a lot of fun.