On Buzzard, from director Joel Potrykus 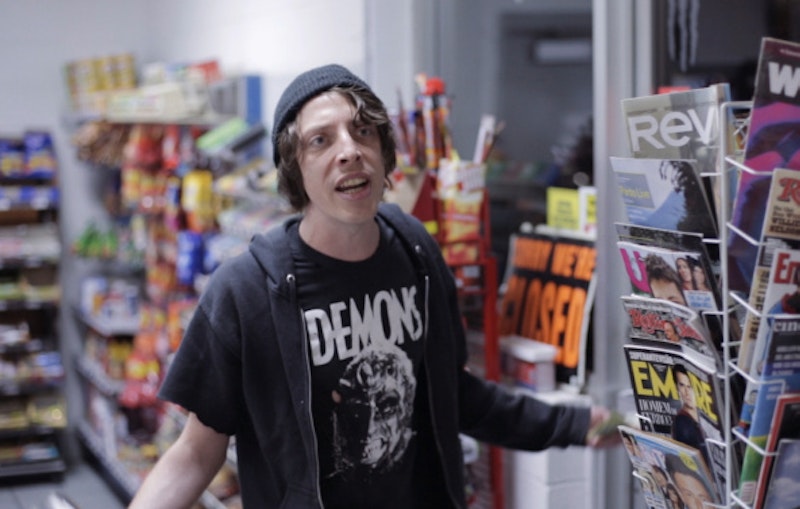 Joshua Burge’s eyes are almost too much: two wide, watery headlamps. In Buzzard, they seem to bulge from gray, shriveled sockets, as though the actor was pharmaceutically wired or suffering from insomnia. As Marty Jackitansky, Burge glares through the cinematic world director Joel Potrykus presents while defiantly staring down all comers like, well, a starved bird of prey. That the rest of his face—save a beak of a nose—seems secondary to those predatory, probing eyes feels oddly appropriate.

Nominally, Marty works as a mortgage temp at a bank, but his primary occupation is the relentless execution of short-sighted cons, most of which involve ripping off his employer. Why re-route payments to customers when he could deposit them into his own account? Why actually use the supplies the office secretary orders at his request when he could “return” them to an office-supply store in exchange for cash? There’s a stomach-churning voyeurism at in watching Marty sleepwalk through hustles that his victims are too complacent or distracted to catch on to.

Pitying sheep is a big ask, so the protagonist becomes a despicable anti-hero of sorts—the kind of half-psychotic, arrested-development twentysomething whose apartment is wallpapered with horror-flick posters, who dines on corn chip- and ranch-dressing-topped microwave pizzas, who spends his spare time transforming a Nintendo power glove into a Freddy Kruger weapon. The joke is that Marty’s no sharper than anyone he punks. He’s hapless enough to confide in Derek (Potrykus), a co-worker startlingly oblivious to Marty’s full-bore loathing. The pair are “friends” in the way that 13-year-old boys are “friends”: using and deep-sixing one another alpha-male fashion. It’s hardly a shock when Marty bullies his way into living in Derek’s basement.

Eventually, everything goes awry, and Buzzard’s last half electrifies when its titular control-freak is forced to acclimate himself to abject uncertainty. A number of likely outcomes seem viable, and it’s to the film’s credit that it pursues and undermines those outcomes; the mind-fuck of a final scene will reverberate in your mind for days, even if Burge’s go-for-broke angst can’t. My favorite moment arrives earlier, when a convenience store clerk, zeroing in on how friendly Marty is, adroitly and unapologetically swindles the swindler. Throughout, we watch our anti-hero on the telephone with his mother, his mouth working, his body language screaming “no hope” as loudly as the blasts of heavy metal that dot the soundtrack. “I’m happy now,” he assures her during their last call. “Everybody likes me.”