The Best Gays of Our Lives 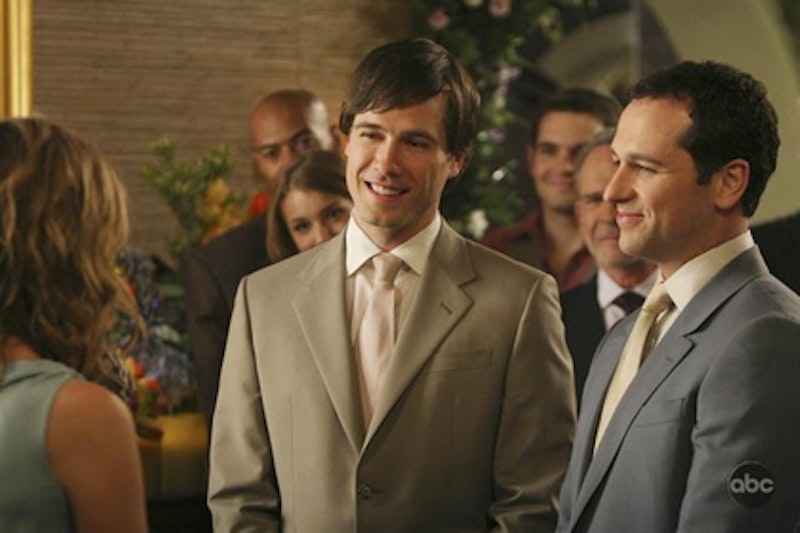 Proposition 8 got me thinking about the gays, queers and closeted types I see on television, and the PR campaign gays need to wage. Gays, lesbians and others took to the streets to protest the passage of an anti-gay marriage amendment in California (even as gays got married in Connecticut). But let's be honest, gays: protesting won't do shit. This is a crisis of public relations, and yelling and shouting never convinced anybody—that's right, cable news and talk radio are not convincing!

Indeed, some of the best gay PR is happening on serial TV, and it will be a vital part of the effort to change the minds of the marginal number of Californians who voted for the amendment—and no, not just black people (the amendment would have passed had not one black person voted). Let's take stock of the best gays and gay relationships on TV, and a couple of the ones that need to go.

Ugly Betty (ABC) - Mark and Cliff. One of the most underrated gay couples on television, Mark and Cliff—whose relationship is in grave danger—is the kind of gay couple we haven't really seen on TV. Cliff is overweight, not very fashionable, a lover of French movies who loves the skinny, fashion-obsessed, superficial Mark. ABC, don't let this relationship die!

Brothers & Sisters (ABC) - Kevin and Scotty. Kevin and Scotty married in California long before Prop 8 passed. The best part about this match is Kevin, who is, in my opinion, one of the most fully-rounded gay characters on television: he's arrogant, controlling, spoiled, selfish, at times insecure and yet loving, generous, reliable. ABC bravely approved a gay character who has a sex life and is political, who is by turns despicable and adorable. Scotty, his partner, is a Southern gentleman who rose from cater-waiter to head chef. Both are believable and complex.

The L Word (Showtime) - Tasha and Alice. I apologize for such a male-centric list. No wonder Showtime's L Word, entering its final season in January, is so important. (Thank you Showtime for announcing a spin-off based Leisha Hailey's Alice, by the way!) Tasha and Alice are a great couple, though perpetually on the rocks. Tasha, a black army veteran ousted for coming out, is calm, rational and introverted, while Alice, a media personality, is vivacious, loud and extroverted. Look out for this show in January.

Greek (ABC Family) - Calvin Owens and whomever. Calvin is a brilliantly conceived character, almost too brilliant. He seems tailor-made to buck stereotypes: a black legacy at the show's college, he is completely comfortable with his sexuality but did not come out at first so that his fraternity brothers would get to know him before thinking of him as the "gay kid." Calvin recently broke up with Michael, a doctoral student in French, a more stereotypical gay guy, because they weren't a match: Calvin was into sports and beer, Michael into film and wine. Calvin seems headed for a new relationship with a fellow frat bro.

The Sarah Silverman Program (Comedy Central) - Brian and Steve. Okay, I actually don't watch this show. But I know enough about the video game playing, TAB-drinking duo to know that it's unlike anything I've ever seen, on television or in my life. They have to be the most unattractive couple on television, gay or straight. I love it!

Mad Men (AMC) – Salvatore, Kurt. While there are no gay couples on Mad Men yet—it's 1963—the show has given audiences a glimpse into life before Stonewall. Salvatore is deep in the closet but painfully crushes on his straight, homophobic coworker. I normally don't like closeted characters, but Mad Men is a period piece and Salvatore is well drawn. Kurt, a younger, European employee, on the other hand, flatly proclaims in an episode, "I'm homosexual." His business partner glibly tries to cut through the shock: "It's all the rage in Europe."

No list would be complete without an homage to the deceased, the gay characters we no longer have but whom I miss dearly.

The Wire (HBO) - Omar. Omar was the most exciting character on this perennially under-watched series. While he went through a few lovers, most ended up dead, and none he loved more than the first, who died to keep him safe. Omar was a renegade, living outside the system, with no allegiance to any gang or the police. He was dangerous because lived only for himself. In that way he was kind of an American hero, a "maverick" in the old Western sense, updated for the streets of Baltimore. Rent this series on DVD now!

In Treatment (HBO) - Alex. Watch this show, people! Alex, an Air Force pilot, never came out, but it was pretty clear he had a curiosity about men. He spent most of the series trying to tear down his emotional armor, his need to be perfect, a feat he almost completed. Blair Underwood deserved an Emmy for this role.

Will & Grace (NBC) - Will and Vince. You thought I forgot! No, a lot of gays have a problem with Will (more have a problem with Jack), but I liked Will. Like Kevin on Brothers and Sisters, who was modeled after Will, Will is pretty complex: he's witty, fun and caring, but also a bit of curmudgeon and bit too quick to judge others. Vince is a dream man: a hunky police officer who has a fondness for fancy lotions and hair products. Even though I would have preferred Will get Kevin's sex life, I'm glad he ended up with Vince, buying a townhouse in Harlem and "driving up the price of real estate in affordable areas."

The Starter Wife (USA) - Felix and Rodney. There's still hope for Felix, the black action star on the "down low" and Rodney, a gay interior designer (cliché alert!). But as much as I love Rodney's cute vests, I hate his stupid relationship. Why is Rodney on the "down low"? Because he's black? And why has his voice suddenly gone up an octave now that he's on the verge of coming out?

Desperate Housewives (ABC) - Bob and Lee. I HATE Bob and Lee. The married gays down the street, they have no personality. They are all one-liners and pastel button-downs, boring as hell. They don't even have the privilege of creepy secret like everyone else on Wisteria Lane. And what happened to the super-interesting Andrew from season one? Why is he boring and corporate now? Can Marc Cherry save Housewives from these embarrassments?