"Mr. Sunshine is okay. On the other hand, it’s not really okay." 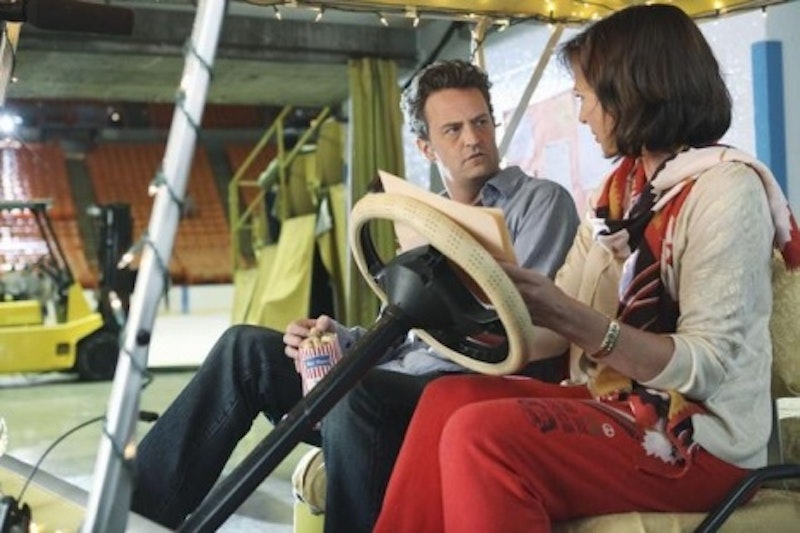 A star like Matthew Perry can buy a whole lot of serviceable banality, but when dumped in a pile it amounts to a good deal less than you would ask for. The best thing about Mr. Sunshine is the spending on big sets and crowds of extras to dress them up. Perry plays the manager of an arena and you see office workers, maintenance workers, clowns, and an elephant. The lighting makes it seem like there’s sunshine indoors: the most sun is in Allison Janney’s office (she plays the owner of the station), but there’s still plenty a few levels down, where the head maintenance worker and Perry do a brief crosstalk routine.

Matthew Perry’s character. What’s up with him? He’s a guy who learns a lesson and starts getting his life straight. But he already has a happening job, so he isn’t a drug addict or layabout. That leaves not being right with people. But having him be a mean guy would be a drag. So we’re left with someone who’s amiable but not amiable in the right way. He smiles but he doesn’t give a damn about you. Which Perry says has been his own situation in life, one that he has attempted to set right. Somehow, when converted into this sitcom, his life situation didn’t wind up as a story, just a storytelling dodge. Perry (I mean his character in the show) has to have something wrong with him, but not that much wrong, and in the end it winds up being nothing much, at least so far as we can see. Instead we’re told about it. (See below.)

Allison Janney. She’s a rich, spoiled whack job. She gets hopped up on pills and runs on her exercise machine in high heels, acts lousy toward her long-estranged child, says kind of racist things, starts singing a weird song that she made up. But she still seems like the Janney in The West Wing. Not that she’s unconvincing as the whack job; she’s fine. It’s just that being fine seems secondary to being the Janney we know. Conceivably she could have done this show first and then done The West Wing and the effect would have been the same: Hey, there’s Allison Janney. That’s one attribute of a good TV actor.

Matthew Perry’s age. His character has just turned 40; that’s a plot point. He looks plausible enough kissing a hot blonde, yet his face has more pouch than it used to. And did he always have that extra chin? It’s small but it won’t quit. As some other physical feature it would qualify as winsome: it has the right shape, size, and gentle insistence. But it’s flab stuck under his chin, and it buds from beneath his face like a third pouting lip. Whenever he has to do a quizzical-disgruntled-bemused take, there it is. And he has to do those takes often because he’s a put-upon everyman.

The situation at hand. Perry’s fuck buddy, a leggy blonde woman, dumps him for a dynamic, great-guy coworker. His boss, Janney, has a long-lost son that she dumps on him, and she wants to present a trophy to a bunch of ethnic kids for photo-op reasons.

Quite good. I liked Nate Torrence as the doofus son. He’s a Randy Quaid type, the writers give him some good lines, and he does good expressions with his face. Sorry, I mean he does skilled, finely tuned facial takes. They perk up a scene without going too big. Here’s one of the good lines. Perry has to give the doofus a job and there’s nothing he’s suited for. What are your skills? “… I like Mafia movies.” Or something like that. My version may be a bit different than the original; if so, it’s probably better. But the original was still okay. Janney also gets a good line, and it goes with the expository bit cited above. There’s a big oil painting of her hanging in her office. After she tells Perry she’s the owner, she says, “They don’t do oil paintings of people who aren’t owners,” or words to that effect. Would the painting have been enough to tell viewers her role in the proceedings? Possibly.

Highlight, wind-up, denouement. A half dozen clowns carrying fire axes advance on Janney, who panics and picks up a small ethnic child to throw at them. Perry does the right thing. He sits down and tells the blonde that Alonzo (the great-guy coworker) is the fellow for her. He ambushes Janney on her golf cart and saddles her with her doofus son so reconciliation can take place. Perry stands in a sunshiny, tiled corridor of the arena complex. He is deflated. From beneath his chin, we see his winsome, sly, unwelcome second chin come peeping out for a visit.