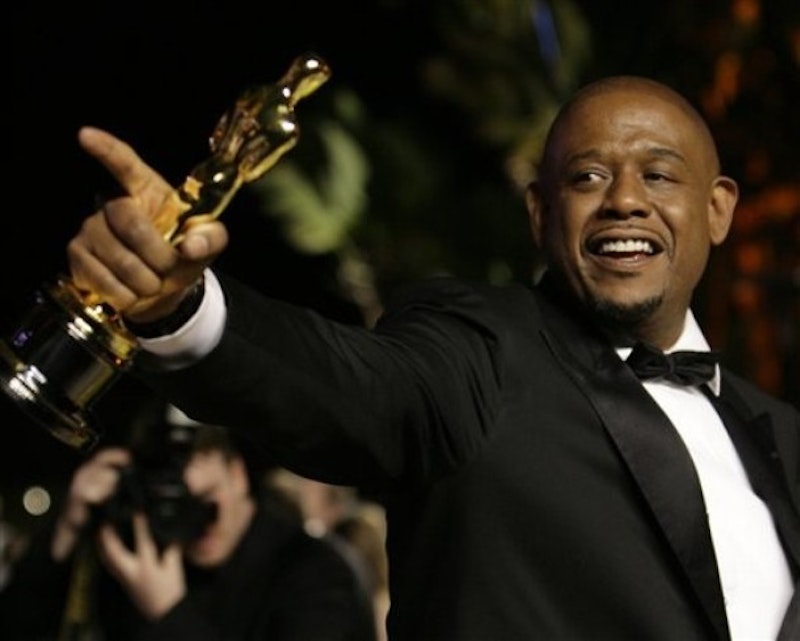 The New York Times' recent article on Hollywood's "whiteout" about the lack of black nominees for the Oscars has caused some controversy, mainly for forgetting to mention Whoopi Goldberg. But there may be an unintended consequence to Hollywood's alleged race problem, if we concede there is a particularly recent one: Are more A-list black actors moving to television?

While watching a recent episode of The Good Wife I was surprised to see a promo for a series starring Forest Whitaker: Criminal Minds: Suspect Behavior. I feared I hadn't been paying attention. Whitaker is a movie star of the biggest kind, an Oscar winner. What is he doing on CBS?

Indeed, I hadn't been paying attention. Sure, I knew Kerry Washington had recently signed on to do a Shonda Rhimes series about a fixer. Jennifer Beals was doing The Chicago Code, and Jill Scott and Jada Pinkett-Smith already had their own series. But these actresses didn't have Oscars in hand.

As pilots are getting ordered and shows have midseason premieres, it's becoming increasingly clear: television is grabbing black actors left and right, for all sorts of projects.

Oscar nominees have been heading to TV in droves: Taraji P. Henson just did a Lifetime movie; Terrence Howard has been doing a Law & Order spinoff; Angela Bassett signed on to a cop drama on ABC; Don Cheadle is creating his own series for Showtime; and Michael Clarke Duncan is doing a Bones spinoff. Rising stars like Columbus Short are joining Rhimes' series. Common is headed to AMC. Of course, stars like Blair Underwood are already headlining series.

As black shows start to build audiences again, networks are ordering more shows with black leads, despite mixed success (see Undercovers, and The Chicago Code is showing signs of flatlining).

More shows means demand for more actors. If AO Scott and Manohla Dargis are right, the film industry seems less keen on taking risks with black actors, meaning big names like Whitaker, Cheadle and Bassett come at a discount for TV. Meanwhile, television isn't what it used to be. Networks on broadcast and cable are taking more risks, giving the small screen its own cachet.

All this is sending the cream of the crop to television. TV is good work. The paychecks are consistent, as is the schedule, and a successful show keeps paying for years after cancellation. Yet despite its efforts, television remains film's little sibling. There are "TV stars" and "movie stars," never the twain shall meet. Movie stars get much higher paychecks upfront, but have more to prove in terms of bankability.

Unfortunately, black leads have mixed success on that front. Yes, there's Denzel Washington and Will Smith in drama and action, and Chris Rock in comedy, but the industry has not spent too much effort investing in younger talent, especially for black actresses. And apparently there isn't much room at the top, making it harder for older actors to age as gracefully as a Sandra Bullock, Meryl Streep, Adam Sandler or Robert DeNiro.

If this trend is real—and even I'm not convinced it's actually happening—it makes for an interesting case study in Hollywood labor: star power is always in demand, but certain kinds of star power are more desirable in different venues at different times. Perhaps black Hollywood is having a TV moment. Let's wait and see.