March of the Ants

On “Trumbo’s World,” the sixth episode of the first season of MacGyver, from 1985. 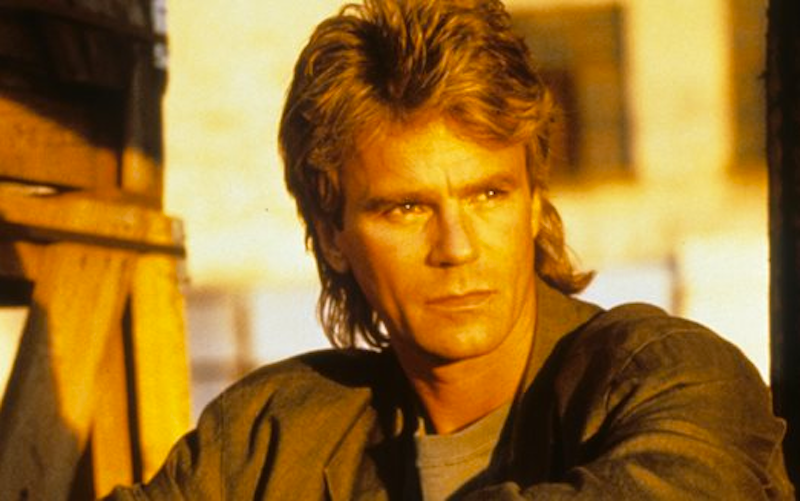 Recently, I spent a week in Leander, Texas, visiting my nine-year old son. We spent our time together in what has become a semi-perennial fashion, attempting to make up for distance and for the lack of communion Skype offers. We swam a great deal. We visited the LBJ museum and hit up a comic book shop. He effortlessly trounced me at chess, though I held my own at checkers and Connect Four. We read books, played video games, made fun of various iterations of Scooby-Doo. We watched a whole lot of MacGyver.

For those not in the know, MacGyver was a television series that ran from 1985 until 1992. The protagonist was one Angus MacGyver (Richard Dean Anderson), Vietnam veteran and inventive, worldly operative in the employ of a quasi-governmental foundation. Sheepish, sexless, and a bit of a dork, our hero was forever catapulting into international intrigues or stumbling into domestic conspiracies or doing favors for old friends, reliably risking, via his mulleted big-heartedness, serious injury or death.

The show typifies a certain species of Reagan-era camp, where goofiness and danger and innocence co-mingle as fluffy, prime-time escapism. MacGyver’s luck seemed to strain belief. He rolled a Jeep and had a nemesis who never seemed to die. One of his best friends was played by Teri Hatcher, who somehow hasn’t been as insufferable since. There are a lot of weak, bad jokes. But MacGyver ages better than, say, The Dukes of Hazzard or The A Team because it was a show science teachers probably adored: dude was constantly sciencing the shit out of everything.

I didn’t catch every episode of MacGyver during my stay, but of the ones I saw, “Trumbo’s World” stood apart from the rest. In it, MacGyver isn’t facing off against a gang or a mastermind or a terrorist ringleader or a crooked constable; he’s forced to stare down nature. The pre-credit sequence offers freeform derring-do, as our hero springs a cute, imprisoned geologist from cut-rate bandits somewhere in the Pyrenees.

From there, he’s off to the Amazon to aid a flighty ornithologist homie who’s concerned about some birds or something. (One of MacGyver’s running jokes is that its subject almost never gets a chance to breathe; a fresh disaster is forever lurking, and he’s always the only man for the job.) Seeking a guide into the brush, MacGyver and Dr. Alden (Peter Jurasik) find themselves at the mercy of one Lucien Trumbo (David Ackroyd), an irascible, imperious plantation master. Trumbo, brandishing a firearm, tells them to shove off. Alden, who is kind of an idiot, effortlessly embodies the whiny, entitled American attitude. Heretofore silent, MacGyver realizes that begging isn’t gonna fly, and slides into a mein he will occupy for the episode’s duration: a guileless, capable handyman who’s maybe a little slow. He offers to repair Trumbo’s busted generator, and in so doing a) befriends a young, loyal campesino (Will Gotay) named, um, Lulz, and b) eventually wrangles a guided brush tour from the grateful, softening Trumbo himself.

So: exposition topped with foreshadowing. You’re sure you know where the plot is going; it’s obvious that Trumbo will soon stand revealed as a total dick who exploits and mistreats the natives who work for him, and MacGyver will emerge as an incidental emancipator. Except that that isn’t what happens at all.

Trumbo, Alden, and MacGyver quickly learn why all region’s birds and mammals are vacating the region: ants. Millions of biting, relentless soldier ants are swarming every inch of ground—and they’re headed straight for Trumbo’s plantation. Alden’s enthusiasm for nature photography does him in; he’s so excited to be snapping pictures of ants clustered on trees and steer skulls that he notices too late that they’re upon him, and he tumbles into their midst and is overcome.

The survivors in the party rescue members of a nearby tribe, then it’s back to the plantation, where every campesino except one is getting the fuck out of dodge. An enraged Trumbo blasts a hole in a boat—Ackroyd, credit to him, really puts his all into the role, in a way that other guest stars on this show couldn’t be bothered to—then MacGyver decks him, and glowering ensues on a massive scale. But once the campesinos have skedaddled, Trumbo, MacGyver, and Lulz are all that’s left to take on the unstoppable tide of ants—or to die trying.

“Trumbo’s World” is based on short story "Leiningen Versus The Ants" written by Carl Stephenson and borrows footage from the 1954 Charlton Heston vehicle The Naked Jungle. There’s something innately biblical about its premise, and contemporary screenwriter/director team might have seen fit to present the invading ants as a punishment. Trumbo would’ve been more of a sadist, he wouldn’t have had the memory of a dead wife at hand as a moral justification for standing his ground, and so on; many elements of this story are problematic enough from a modern perspective as-is. But the MacGyver braintrust wring out a dynamite finale anyway, with flamethrowers, exploded dams, desperate straits, and the hero lunging dramatically across an ant-ravaged landscape in an improvised hazmat suit—science, motherfuckers!—on a mission to rescue the plantation, if not whatever crops Trumbo was banking on. Taken whole, it feels like an apt metaphor for today, as we start to recognize that our biggest enemy isn’t among us: the enemy, it turns out, is the world we heedlessly forsook for generation after generation.