Dasha Nekrasova’s The Scary of Sixty-First is a great directorial debut along with her best performance as an actress. 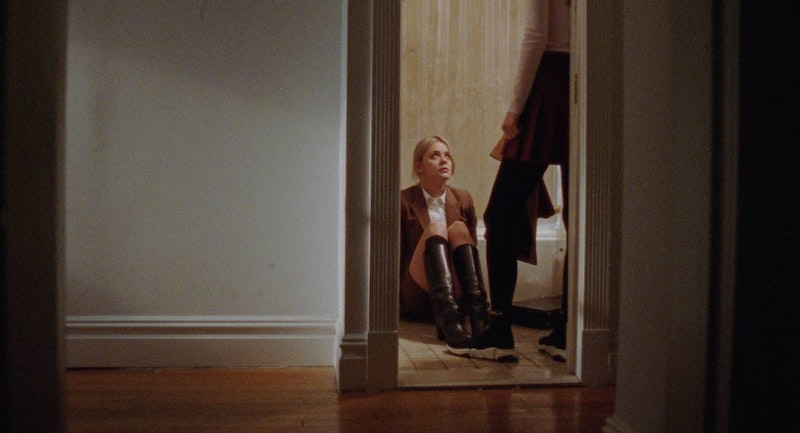 Too few movies utilize title cards and opening credits sequences in anything other than a perfunctory way. Anonymous white sans-serif fonts over black, or worse, jiggly cursive inherited from Napoleon Dynamite and still cursing us 18 years later. Movies should announce themselves, and even if you open cold with a striking scene, title cards and words must be used in an exciting way. Think of the ending of Clueless: Amy Heckerling’s card is the soaring climax of that movie, the moment that makes you ecstatic walking out of the theater. In the last couple of years, I’ve noticed a lot more title cards that fill the screen completely, Joker the most notable example and the only one I can remember. It’s another cheap fad used by most filmmakers with little thought or originality. It’s something that’s already become stale.

I wish I could’ve seen Dasha Nekrasova’s The Scary of Sixty-First in a theater, but Baltimore has yet to get a booking. No matter: you can rent or buy it on Amazon and iTunes now. Frayed pink and white serif title cards pulse over looming low angle zooms and pans of buildings on Manhattan’s Upper East Side, all backed by Eli Keszler’s pulsing synth score. I never saw a trailer for this movie, just a short clip of Anna Khachiyan’s cameo as Ghislaine Maxwell (or not?) and a quick move into a close-up on Dasha saying, “That’s Ghislaine.” Most people I saw sharing the clip made it clear this was proof positive Nekrasova was a shitty actress and filmmaker, an animosity carried over from Red Scare, her podcast with Khachiyan. I don’t understand why Red Scare makes so many people so mad, but it really brings out the sick and venal urges of otherwise respectable and “classy” people, who just can’t believe what Anna and Dasha said this time.

The Scary of Sixty-First is better than Repulsion, but I can’t get past Catherine Deneuve’s horrendous and incomprehensible English. I don’t think it adds to the claustrophobia or fevered insanity of the movie. The Scary of Sixty-First is closer to a 1970s or early-1980s giallo, from its gloriously lurid lighting and titles, its poppy and dark soundtrack, to its impressive low-budget gore, to its wild sexual transgression. Madeline Quinn plays Noelle and Betsey Brown plays Amy, women renting an apartment on the Upper East Side. They don’t get along and they never should’ve moved in together, and even worse, they soon find out that their apartment used to be one of Jeffrey Epstein’s repulsive pied-à-terres. They find this out from Nekrasova, “the girl,” an anonymous independent investigator obsessed with the Epstein case and this particular apartment.

Soon Amy becomes possessed—clearly by the ghost of a 13-year-old girl—and she freaks out her boyfriend when she practically transforms into a child during sex. Nothing supernatural, just a phenomenal and terrifying performance by Brown, who becomes completely unhinged as Noelle and the girl lean on each other and try to get out alive. Ditto Nekrasova as the girl demonstrating how it would be impossible to hang yourself with a bed sheet in prison, and nearly choking to death herself. You can see her face go white and blood vessels in her eyes. Again, like those lurid Italian thrillers and horror movies, no one escapes without blood spilled. The Scary of Sixty-First is a great first feature: a tight 81 minutes that goes places few dare to tread lately. It’s shot with the economy and concision of a professional—Hunter Zimmy’s work in 16mm is excellent—and it’s also Nekrasova’s best performance as an actress by a considerable margin. I love seeing her on Succession and in other peoples’ movies, but this is something else, and I hope she makes another one soon.