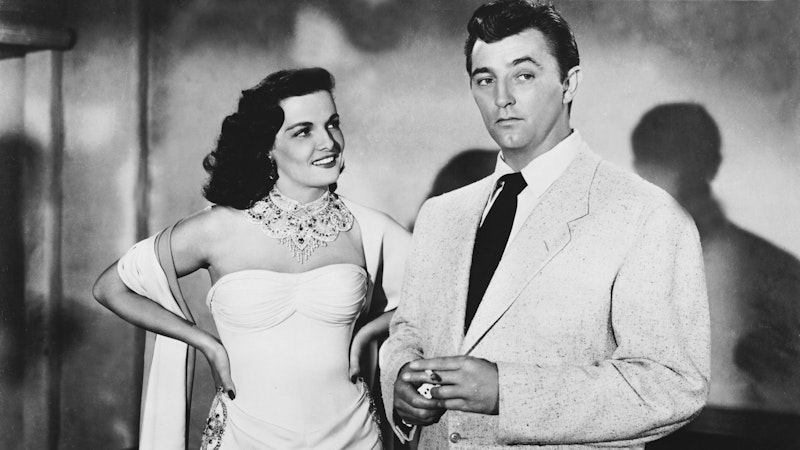 Macao (1952), primarily directed by von Sternberg and finished by Nicholas Ray, is an example of a tense production that resulted in a somewhat choppy film. But the fragmentation of images that often has no continuity was superseded by von Sternberg’s inherent elusive vision and the stars of the film, Robert Mitchum and Jane Russell. It isn’t von Sternberg that’s the primary mover of this film, ruling with an iron aesthetic fist, but the various personalities on the set and behind the scenes that ended up making this an odd and unique film noir.

According to Paul French in “Mayhem in Macao: Josef von Sternberg’s Fantastical Macao of the Mind,” nobody on the set liked von Sternberg's way of directing. The script itself was written many times by many people, and as a result, the plot had various issues. Mitchum and Russell were good friends, and they have a great chemistry in the film, but this only made things tougher between Russell and Howard Hughes who at the time owned RKO, and was the producer of Macao. Hughes was more interested in Jane Russell’s breasts and Russell kept trying to run away from him because he wanted to sleep with her.

Von Sternberg thought that Hughes needed to stay away from the set, but Hughes was a compulsive micro-manager who was brilliant in his own way, but hardly had any beautiful cinematic vision. In addition, another star of the film, Gloria Grahame, was in the process of divorcing Nicholas Ray, and Ray was called to finish the film. Despite all of this insanity and battle of the personalities, Macao comes off as a blend of noir and comedy, which makes it one of a kind.

Mitchum plays Nick Cochran, a World War II veteran, running away from New York, and finding a refuge in Macao. In his typical Mitchum fashion, Cochran is indifferent, cool, yet vulnerable. He’s smart on one hand, yet haphazardly falls into various situations, both good and bad. On the boat headed to Macao is also Julie Benton (Russell), a chanteuse looking for work (not unlike Marlene Dietrich’s Amy Jolly in von Sternberg’s Morocco). Russell’s beautiful but underneath is a woman with a huge chip on her shoulder (something we’re reminded of continuously throughout the film) and lovable crassness. In a very unlikely way, it’s Mitchum who provides the masculine protection and vulnerability that awakens Russell’s own feminine vulnerability.

Much like Marlene Dietrich and Gary Cooper in Morocco, Julie and Nick are drifters, running away from themselves, pretending it’s an external imposition that’s in their way of a good life. Perhaps they even like the perpetual suffering and, in some way, this is what draws Nick and Julie toward one another. There’s an immediate sense of familiarity between the two.

Also on the boat is Lawrence C. Trumble (William Bendix), a traveling salesman looking for fortune in Macao. Trumble, as well as Nick and Julie converge together in a central location—Vince Halloran’s gambling joint, aptly named “Quick Reward.” Halloran has been on the run from the law, and suspects Nick to be a New York detective, whose primary target is Halloran himself.

This turns out to be untrue. Although Mitchum’s looks and “devil may care” attitude may better fit a role of a detective, it’s William Bendix’s funny and amenable salesman Trumble that ends up being a New York detective set on capturing Halloran. Throw in the mix various Chinese people that do Halloran’s bidding, and his girlfriend/croupier, Margie (Gloria Grahame) who ends up falling for Nick’s indifferent charms, and you have a plot line that meanders but finds its way out of the production labyrinth.

Although most of von Sternberg’s films (especially some collaborations with Dietrich) have an element of almost accidental comedy, Macao’s humor is different, and appears to be in a battle between von Sternberg’s artistic seriousness and Mitchum’s lack of interest in von Sternberg’s disposition. It’s as if von Sternberg found himself in a world dominated by characters who are purposely trying to de-center him, and for whom breasts and cleavages (“How vulgar!,” exclaims the artist) are more important than the painterly use of light in order to convey the mood of the film. Von Sternberg is a new headmaster at the boys’ boarding school and the boys don’t give a damn that their headmaster “read Classics at Oxford.”

Although there’s some debate over how much of the film is von Sternberg’s or Ray’s, there are many elements that are clearly recognizable as pure von Sternberg. The ineffable light and shadow, the louvered doors, the framing of Russell’s face, as well as the scenes in the harbor that bring to mind von Sternberg’s silent classic The Docks of New York (1928) indicate that it’s von Sternberg’s vision that reigns supreme, cinematographically speaking.

But in the end, it’s Mitchum who rules the screen and brings Russell into the fold. Mitchum has the last word, both figuratively and literally. As the capture of Halloran comes to an end, Mitchum, soaking wet, comes on board the ship, where he’s greeted by Russell. She’s glad he’s alive but is slightly annoyed and resists his embrace. “You’re all wet,” says Russell. “You’d better get used to me fresh out of shower,” replies Mitchum and plants a kiss on her. It’s Mitchum’s effortless movements from vulnerability to masculinity that transcend the slightly disjointed Macao, and render the film as part of the noir tradition.