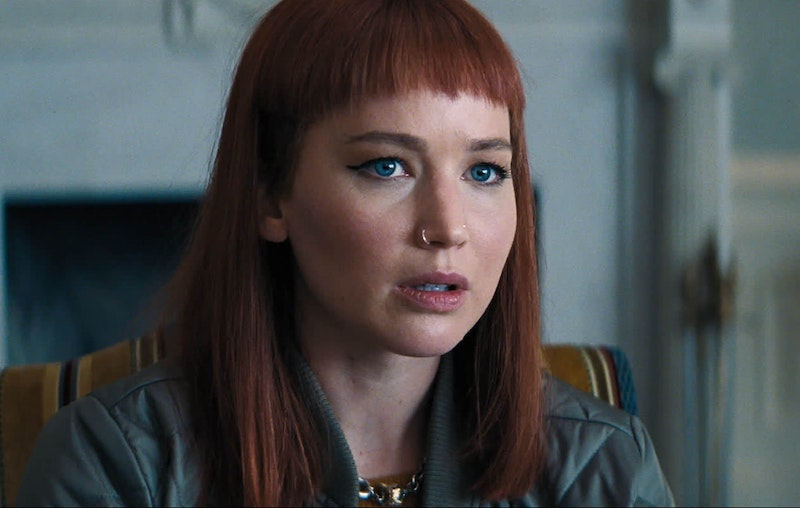 I liked Don’t Look Up. True, Adam McKay ought to fail. The would-be master smartass gave us Vice, a prolonged exercise in failed wit that had the extra handicap of being shot anti-visually, to drive off the eye. Now there’s his new one, still smartassy and shot much the same way. Everything looks like it’s stranded somewhere on the floor of a big retail outlet, and the chiaroscuro seems rigged to make not-black the exception, black the norm. Even so. Across this field of arty dimness one sees the action flicker and then take hold. Meetings are spotted among office furniture. Leo DiCaprio and his worried beard and glasses rush to save the world; actually he frowns about the necessity of doing so, gets out of a limousine, and goes on TV. The ending pulls its weight, though by this writing the major bits there may be on social media.

McKay, a man begging for a boomerang in the head, has made a film about the top issue of our day, and it’s about as good as he needs for the moody dingus to look intelligent. The issue is a pair of twins: global climate change (with covid themes added), and the breakdown of public communication as an effective way of dealing with the world’s pressing realities. He tackles it by showing the public’s distracted semi-response to an impending giant meteor, the “public” being media consumers and feeders. Us the viewers, and the people in the big offices and on the TV screens: collectively we’re pretty much a dog barking its way to its doom. That’s most of the satire in the movie, and it’s a very fair point, I think.

But a human fact lies underneath the great social malfunction, and McKay’s good enough to notice. No matter how closely any person thinks they see the big picture, they’re going to fixate on what’s at hand, which is usually small. It’s an admirable stroke to have the mild, squarely-built little general (Paul Guilfoyle) scam Jessica Lawrence for snack money, and then have her puzzle over it again and again as she waits to see if the world ends. The big picture doesn’t fit the small mind, meaning any mind of human size.

Lawrence was good, everyone was good. Meryl Streep’s president seemed based on the Trump daughters-in-law plus Katharine Harris, and possibly Laura Dern’s performance as Harris in Recount (2008). A French sort of theory: the po-faced general who rips you off, and farts while looking in your eyes, he’s our world’s General Milley shrunk down and rendered mock. Mr. Centrist-Hope General isn’t a hospital, he’s a deceiver and a stink and a dead end—that’s what director McKay, a man of the steer-the-rocks left, wants to tell us. I suppose. Theoretically I’m too worried about climate change.

Semi-magic. Somebody raised the following point on social media. The decent high-level bigshot, Dr. Oglethorpe of Planetary Defense (Rob Morgan), shows up from nowhere to join the astronomers’ final dinner. Is this Magic Negro–ish? Oglethorpe has his own family, one would think, and he works in DC. But now he’s in Michigan and it’s to get together with people he barely knows. Maybe there’s some cover dialogue, but the post or tweet wasn’t pointing to a hole, more a slant. The idea is that filmmakers fall into choices like the one alleged here, ones where dark people and other minority characters get moved around with less regard to the ground rules for being human.

In this case, Timothee Chalamet’s at the dinner, and he’s a white boy who’s just Jennifer Lawrence’s pickup. But Morgan makes a big entrance as Oglethorpe, whereas the Chalamet character is merely among those present. If Oglethorpe did show up as white, I think the movie would make him pretty old or very young. If he were 52, an unremarkable age for high-level officials, then halfway through the movie he’d grow a straggly mustache and reveal how he’d been listening to Gram Parsons with the lights off and his naked feet up on the desk. But these gimmicks wouldn’t be for plausibility. Don’t Look Up is a busy, crowded sort of film, and characters have to be remembered. If Oglethorpe’s a black man, this need for hooks and tags is much reduced; just the knobby, obtrusive name with its reverse-logic Anglo feel, and there you go. People will spot the man whenever he’s on screen and they’ll remember him when he’s mentioned.

I find the missing family easier to ignore if the character’s black; or that’s my read as best I can tell. It’s a sad thing to notice about yourself, and typically I suspect that a lot of other people share the same fault. Even so, I don’t think it’s the storyteller’s main advantage here. And how the preceding stacks out guilt-wise I couldn’t say. Theoretically I’m still too worried about climate change.