The love and lack of sentimentality of William Witney and his movies with Roy Rogers and Trigger, “The Smartest Horse in the Movies.” 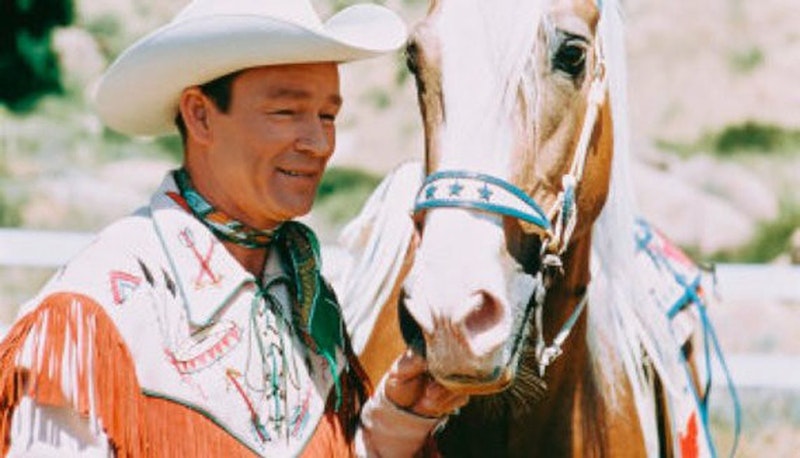 “[William Witney] makes you accept everything on his terms, and his terms are that Roy and Trigger are best friends. Trigger is not just his best horse; he's his best friend. You know, in some movies, a cowboy might go to jail to save his best friend from being shot down dead. Well, Trigger is Roy's best friend. It's the easiest leap to have him do that here, yet it's so powerful and so unexpected. What's great is that you buy it, you absolutely buy it, and I don't know that I really would buy it from anybody else but Roy and Trigger.” Twenty-one years ago, The New York Times sent a reporter to Quentin Tarantino’s house to watch a movie with him and talk about it. He chose William Witney’s The Golden Stallion, a 67-minute Western from 1949 without a lick of irony, satire, or sentimentality.

There isn’t a wasted word in Rick Lyman’s Times article: Tarantino is so effusive with his love for Witney, Rogers, and Trigger that I checked out these movies to see if he was right. He was—and that’s not always the case (he told Bret Easton Ellis last summer that he “likes the idea of Fassbinder more than the movies themselves.”). Since the start of the year, I’ve been working late and have only had time for movies between 60 and 80 minutes. TV shows and movies that demand full attention I can’t give; but Roy and Trigger are there for me.

That’s not to say that Witney’s movies with Rogers are vacuous, stupid, or deficient in any way. On one hand, it’s a testament to his ability to tell a story with images more than words, and with the grace and ease that only comes from grinding out five movies a year for nearly four decades. On the other hand, all you need to know are that Roy and Trigger are best friends, and they have to stop the bad guys. I’ve yet to fully go beyond Witney’s films with Rogers and Trigger, but the few I’ve seen have blown me away, just like Tarantino said they would.

The Bonnie Parker Story, from 1958, is superior in every way to the Arthur Penn movie with Warren Beatty and Faye Dunaway. It’s more intense, violent, chaotic, and insane than almost all other American movies produced before the 1970s. Ditto for Paratroop Command from 1959, another one of Witney’s “masterpieces” Tarantino cites. It’s a remarkable war film for exactly the reason it struck him and the late Peter Bogdanovich: it’s a World War II men-on-a-mission ensemble movie where almost everyone is killed in the most perfunctory and sudden way possible. Major characters aren’t seen for 20 minutes, re-emerge, and are killed in wide shots. No close-ups. All in 71 minutes.

(The Cool and the Crazy, another late-1950s juvenile delinquent film about a “high school marijuana gang,” is just as harsh and uncompromising as the former two, and as an anti-marijuana film, it’s aged well, accurately portraying the effects of THC withdrawal—“my insides are turning out, I need the stuff, man”—were bogus when seeds and stems were still present, but in the age of hydroponics, dabs, and edibles, The Cool and the Crazy isn’t the insane and racist joke of Reefer Madness.)

More than anything else, Roy Rogers and Trigger movies have something that few other films do: brutal reality runs right up against art and fantasy, a Western world but set in the present day, with cowboys occasionally confronted by guys, gals, cars, and guns straight out of a noir taking place miles away. To his credit, Witney often cast women as villains, but not as shrews or barren witches: these are criminals, equal on every level with their male gangster counterparts. Same goes for Trigger, “The Smartest Horse in the Movies,” who is as much a star as Rogers and his wife Dale Evans. Whether in Trucolor or low-quality copies on YouTube or Amazon Prime, these movies offer treasures and operate on a level that few others ever even attempt.

Everything is so simple in Roy and Trigger’s world. Witney isn’t a flashy director, but the lack of sentimentality is crucial to what makes these films so moving. Roy and Trigger are too pure to exist in our world, and Witney doesn’t let us forget that. They visited veterans and children’s hospitals together (Trigger was famous for being house-trained), and by all accounts were as they were in the movies. And tragically, so is the world they live in: decent, kind people surrounded by vampires sucking the life out of anyone with any kind of energy. But Roy and Trigger always win in the end. Always. People get hurt, and people die in William Witney’s Westerns, but people also sing, smile, kiss, and laugh. He takes us through all the emotions in a day, in a life, usually in only an hour. He isn’t restricted or stressed out about tone, and his movies remind me how free the form is and how much there’s left to explore.