Return of the '80s Action Hero?

Will The Expendables return the action genre to its 'roid-enhanced heyday? 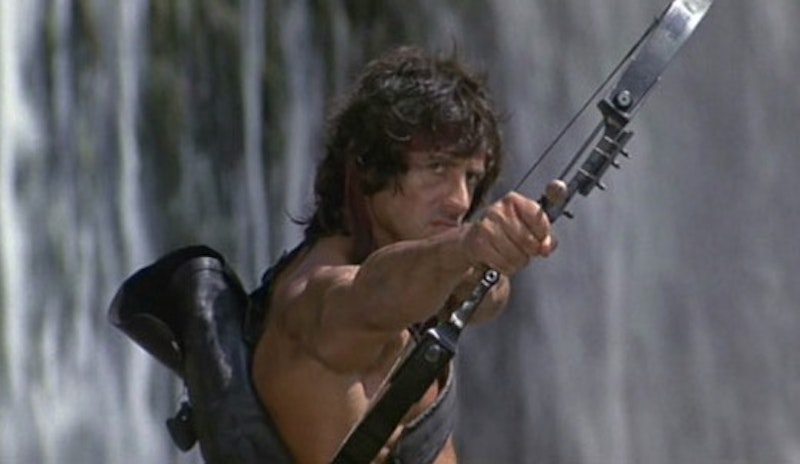 The formerly retired action heroes of yesteryear have certainly been better preserved than their forebears were in their old age. Thanks to increased attention to diet and social pressures to leave behind bad habits like drinking and smoking, Reagan-era ass-kickers remain healthy enough to continue acting in subdued roles, directing and writing, and even holding political office. While questions of suspected continuation of steroid abuse and ingesting unapproved health supplements linger, these men in their 50s and 60s are otherwise in excellent health and ready to reclaim their roles in the hyper-masculine fantasies of 21st century moviegoers.

Sylvester Stallone, who will forever be known for his breakout role as John Rambo in First Blood and its highly successful sequels, is leading the way for his muscular senior citizen comrades to return to Hollywood’s bloodiest and most crowd-pleasing features. With next year’s release of The Expendables, for which Stallone is credited as writer and director, old and new will come together to spill blood and break bones. Stallone, along with Dolph Lundgren, Mickey Rourke, Danny Trejo, and current California Go. Arnold Schwarzenegger, will team up with newer action stars Jet Li, Jason Statham, Terry Crews, and Steve Austin to blow the hell out of some miscellaneous South American country and overthrow its evil dictatorial leader. Or something. The plot details are about the last thing anyone’s worried about.

Brittany Murphy and Charisma Carpenter are signed up to ensure the affair’s not entirely a sausage party, but don’t expect them to factor in too heavily in the action. This is billed as a throwback to the muscles-upon-muscles bloodbaths of the 80s, before Linda Hamilton turned her damsel-in-distress character of Sarah Connor into a foul-mouthed, gun-toting and hard-bodied vessel of destruction in Terminator 2, breaking up the Boys Club that had previously reigned supreme over the genre. Unnaturally large and veiny muscles were now seen as goofy throwbacks to the phallocentrism of the previous decade and the 90s ushered in leaner and less physically intimidating protagonists who used their brains before reaching for their guns and sometimes even asked their love interest for help. That Matt Damon or Nicholas Cage could be taken seriously in bullet-riddled epics meant that size was no longer the determining factor in a hero’s ability to be the driving force in an action-oriented feature. Meanwhile, the decommissioned muscleheads were relegated to comedic roles and “self-aware” action parodies such as True Lies.

But not anymore. Just as the arrival of even leaner and more sensitive heroes in the revival of TV’s Dr. Who and the reboot of Star Trek has led to a new breaking point in credibility, the old school fossils have awakened from slumber like the Elder Gods to devour these metrosexuals and bring back the giant muscles, murderous sneers, and four-letter-words that have for too long been absent from popcorn movies. Whatever this shift might mean for gender roles in film is anyone’s guess; perhaps a veil of irony will protect against a complete return to the old ways and women and girly-men alike will continue to make strides in the genre. If there’s room for a variety of different heroic archetypes, maybe The Expendables is the required catalyst to finally merge these equally valuable cinematic eras.