The Lost Daughter is an atmospheric film with a naturalistic, everyday touch. 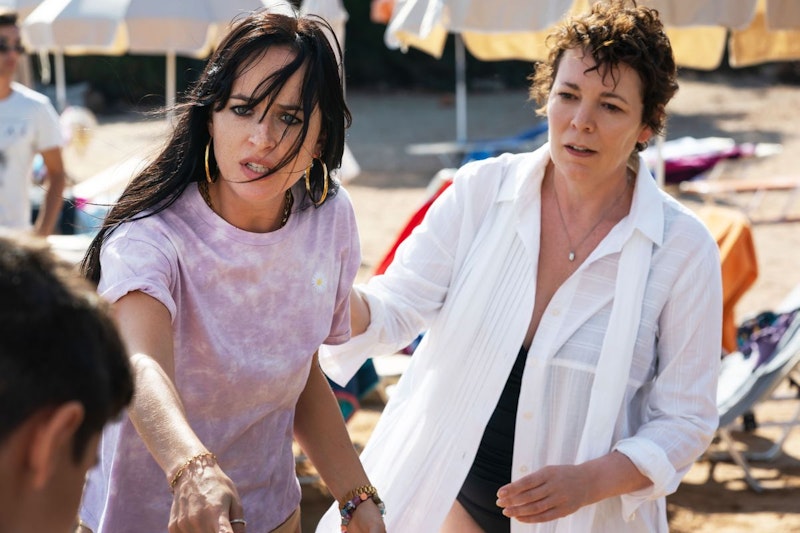 Any good mother will readily agree that parenting presents many challenges. There are frustrations and fatigue. Any parent sometimes just wants to step back, sit in silence, and perhaps even hear his or her own thoughts. But this is remediable. Any good mother also knows that all she really needs is a little bit of undisturbed time in the evening, when the toys are put away, and when the dust has settled.

What happens when the normal emotions of motherhood are filled with problems and burdens that don’t go away? What if a woman is considered an unnatural mother, and called to the task of becoming a parent is something she fully and selfishly rejects? This is the subject of The Lost Daughter, Maggie Gyllenhaal’s directorial debut (now streaming on Netflix).

Olivia Colman plays Leda Caruso, a 48-year-old woman vacationing alone in Greece. We learn that she’s a professor of comparative literature in Cambridge, MA (presumably Harvard), where she’s teaching Italian literature. Leda’s perpetually tense. Everything makes her suspicious, and throughout this vacation, she’s unable to relax.

Leda’s particular in how she spends her time; she wants to be left alone, yet she also craves human contact. All offers of companionship are mostly rejected or half-heartedly accepted. People are just a nuisance that get in the way of books and learning. The caretaker of the house she’s staying in, Lyle (Ed Harris), is older than Leda, yet he gives her not so subtle hints that he’s interested in her. Leda’s attempt at warmth is superficial and brief, and instead of accepting kindness, she coldly demands to be left alone to finish her dinner, as if Lyle’s trying to sell her an overpriced tourist trinket on the street.

Leda deems herself far more important than the people that surround her. She’s a “professor” and not a “teacher,” as she quickly points out to Lyle. Any disruptions, like the Greek youth screaming obscenities or even an uncontrollable rainstorm, are in the way of her intellectual status and purpose. Like most academics, Leda suffers from pseudo-intellectual arrogance where toiling over a footnote or a translation, or coming up with a new comparative theory is an effort not only worth great recognition, but far superior to other work.

Things take a darker turn when one of the beachgoer’s small daughter Elena disappears. The town engages in a search, and it’s Leda who finds the little girl. Naturally, she’s seen as the hero. As the rescue ends, we see flashbacks of younger Leda’s effort to find one of her own daughters at the beach. This may have been an indication that Leda has lost her daughter and may be suffering from trauma, but it turns out that Leda is hardly a victim. In fact, she’s the sole cause of the pain she has put her family through, and doesn’t truly deserve our compassion.

At this point, the film operates in a series of flashbacks between older and younger Leda (Jessie Buckley). The catalyst that reveals a strange and creepy nature of Leda’s personality is Elena’s doll, which has gone missing. Leda finds it but instead of giving it back, she keeps it, and in a manner that implies madness, she plays with it.

We learn the unfortunate trajectory of Leda’s life: married young to a slightly hapless husband, has two daughters but is trying to push out an emerging academic career as a translator and scholar, and a woman wholly indifferent to motherhood. She emotionally and often physically neglects her daughters, who inevitably find a way to rebel. They don’t respect her and she finds them a nuisance.

Like many academics, Leda would rather intellectualize a beautiful life, rather than enact it and live it. As she’s enthralled with Yeats, Paul Ricoeur, and Simone Weil, as well as a fellow scholar, professor Hardy, played by Peter Sarsgaard (with whom she has an affair), she loses the grip on reality and family life. Her detachment is multi-layered, and for three years, she abandons her husband and daughters.

But who’s the real lost daughter? It’d appear that it’s Leda. Gyllenhaal captures the interior dread and awkwardness of her relationships with great precision. She has created an atmospheric film with a naturalistic, everyday touch. At times, as if we’re witnessing Leda in real time, the experience of slow and banal relations between people is in sharp contrast to a stylized cinematography that Gyllenhaal eschewed. Yet the dread is palpable because it’s not stylized. It’s all too familiar.

Something that makes this film a wonderful and an important directorial debut is the fact that Gyllenhaal employs an objective lens through which she sees Leda and others. Her vision lacks judgment for Leda, yet she doesn’t elevate her evasion of responsibility either. Sentences are left unsaid, yet the bodily experience of life, the visceral quality of anxiety, uneasiness, and indifference to children permeates the screen. The camera records everyone’s vision of the world, and creates layers of reality. For some, that reality is actually an illusion, and that’s what makes The Lost Daughter aesthetically interesting. Leda’s a woman caught in her own banality that she makes into an exotic existence, only visible to herself. She’s lost, but the end may suggest that she has reached a point in which she is “actually very much alive.”