Some of the best recent onscreen romances take place within a calendar day. 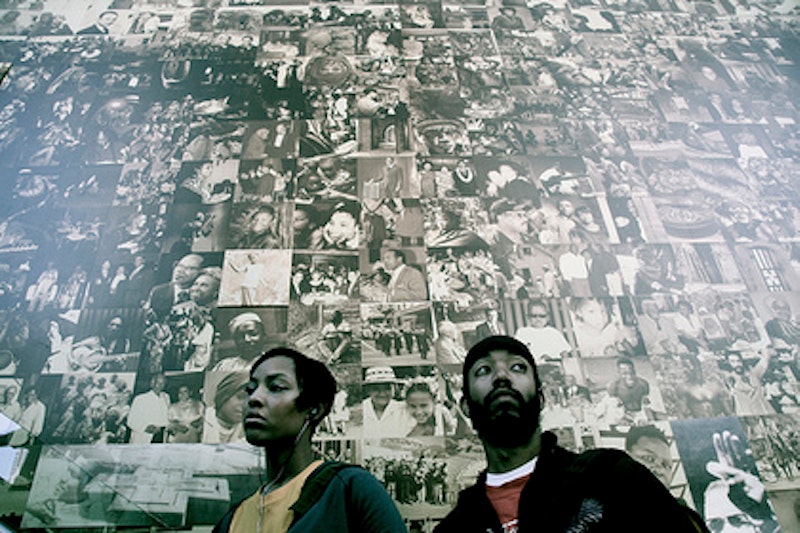 From Medicine for Melancholy.

Am I a complete cheeseball for loving movies about people who fall in love too quickly?

Above is the recipe for one of my favorite cinematic concoctions: the 24-hour romance. Two strangers meet-cute in some adorable way and spend 24 to 48 hours together, exploring a city and falling in love, ever so subtly. Now, I'm the first to confess my soft spot for cheap romantic comedies, but these movies are films for people who appreciate solid, heartfelt cinema. They do well because they ruthlessly exploit our fantasies of the city, our desire for love at first sight, and our hope for random connections in the lonely urban forest. Yes, love at first sight is hooey, but movies are for magic and what could be more magical?

Over the past year a few youthful day-romance movies have been released, cooked to sweet perfection, with the latest opening two weeks ago: Alex Holdridge's In Search of a Midnight Kiss, a gorgeous paean to young love in Los Angeles. I saw it this weekend, and it was such a pleasure I started to wonder what other movies of its kind I've enjoyed. Certainly there is Before Sunrise (1995) and Before Sunset (2004)—the latter being the stronger of the two and one of my favorite romances of all time. Roman Holiday (1953) is probably the grandmother of the bunch, and a movie I never really loved, mostly because Audrey Hepburn's character was mind-numbingly dull. There are recent additions to the family, last year's Quiet City (2007), Medicine for Melancholy (2008) and perhaps Luc Besson's Angel-A (2005), an unconventional take on the subgenre. A day-romance film hinges on the charisma of its leads and its commitment to its host city. Cities are the key. Roman Holiday has Rome, Before Sunrise has Vienna, Before Sunset and Angel-A have Paris, Medicine for Melancholy has San Francisco, and Quiet City has New York.

Midnight Kiss is a surprise of a movie. What I expected was an overly earnest, slow, self-indulgent indie, populated by uninteresting characters with little substance. Yet the movie is strong, supported by two pillars: Vivian and Los Angeles. Vivian (Sara Simmonds) is the female lead, and what a breath of fresh air she is. Finally a love interest who is assertive and smart. She's also hilarious: for the first 20-30 minutes, she's all cuss-words and one-liners. It's all a facade, of course, a defense mechanism. Throughout the movie she slowly unravels—much like Julie Delpy in Before Sunset—takes off her sunglasses and opens up as she and Wilson (Scoot McNairy) roam Los Angeles. And L.A.—GASP!—is Kiss' greatest strength. The director shoots L.A. almost it's like New York in the 80s: abandoned theaters and storefronts, a gritty subway, classic buildings, warehouses with the windows blown out, sparse foot traffic. But it's more than scenery. The movie integrates the city into its narrative, using the "dead city" motif as a metaphor not only for America but also the relationship: they are just getting to know each other, love's seed under barren soil.

Medicine for Melancholy, an as-yet undistributed film traveling from festival to festival, is similar to Kiss. It incorporates Web 2.0 technology into its love story, but it's mostly a story about a city and a couple. Here, the city is the blossoming San Francisco, becoming richer by the year, but also gentrifying and pushing black people out. The young couple in this film is black, and so the drama and romance of San Francisco—between black and white, old and new, young and old, indie and yuppie—becomes the drama and romance of our young city dwellers. It's a subtle and entrancing film, aided by its comedic male lead, played by Wyatt Cenac, and its director, Barry Jenkins, who smartly de-saturated the color from the picture, giving Medicine some depth and complexity. It looks almost black-and-white, not quite colorful, not quite drab.

Quiet City, directed by Aaron Katz, whose Dance Party USA is one of my favorite mumblecore movies, came out last year. It's not great. Its leads are none too compelling—okay, they're boring and unattractive. But Katz's saving grace was his decision to shoot New York as it is rarely shot these days: empty and calm with the occasional hipster art party thrown in. Brooklyn was the perfect canvas for his portrait of two people who are not really interesting and whose paths awkwardly cross.

The final scenes of Quiet City, Medicine for Melancholy and Midnight Kiss are pitch-perfect. That final moment, when the couple meets for the last time, can make or break a day-romance flick. Most end with a parting of ways, which is pretty realistic and gratifying. After all, most of the top love stories on AFI's top 100 have couples who do not end up together. Most first dates go nowhere; most marriages end in divorce. But these movies also leave enough love behind to give us hope. Will our lovers meet again? Will one character turn around and say "I can't live without you" as is so common in romantic comedies? Is there such a thing as love at first sight?