You've heard that Woody Allen deserves your respect for his long, illustrious career, but Vicky Cristina Barcelona is proof that he hasn't completely lost it. 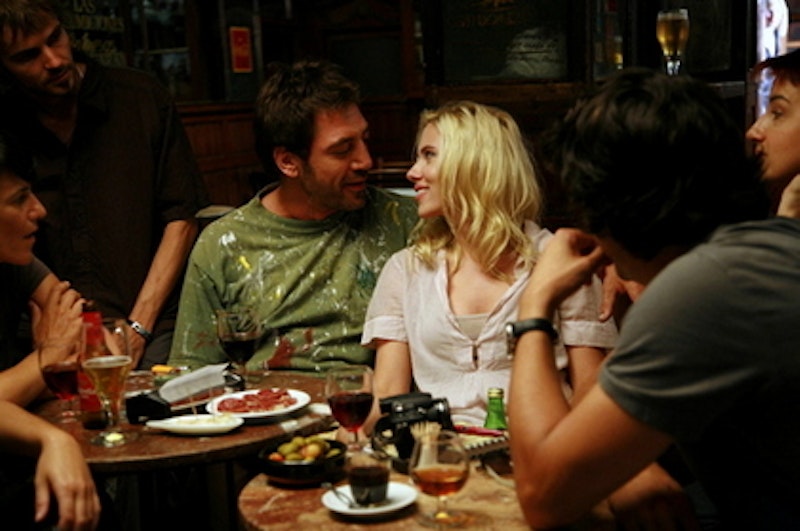 There are few old people in Vicky Cristina Barcelona, though the gaze of one old man is very palpable. Maybe my sensitivity to this kind of gaze is heightened because I am reading Graham Greene’s The Quiet American, which has a voice that is similarly lustful and choleric. There is, of course, far less opiate use in Woody Allen’s film, though the underlying tonic is again similar. What Saigon was to Greene, Barcelona is to Allen: the scene of willing dissipation. If you say the “c” as Catalan speakers do—“th”—the city’s name sounds even more like pillow talk.

The title of the film makes more sense when the three words are arranged vertically, as they are in Allen’s signature credits. They are the film’s three subjects: Vicky (Rebecca Hall), who loves responsibility, Cristina (Scarlett Johansson), who loves sex, and Barcelona (Javier Bardem and Penelope Cruz), who enables them to have affairs they would never dream of back in bad old America. This is a very common trope, but anyone who has spent any time abroad will understand the feeling. Allen, too, has seemed freed by Europe in his most recent films—the brilliant Match Point, the forgettable Scoop, and Cassandra’s Dream, which was in theaters for about two hours. There is a spritely quality that has been largely absent from Allen’s films in the last 20 years, when he has mostly worked in shriveled didacticism (Crimes and Misdemeanors) or pastiche (Shadows and Fog). Both of those films have definite merits, but Barcelona gives this current film much-needed élan.

So we set our scene as Vicky and Cristina, whom dissatisfaction with New York has made luminous, begin their summer in Barcelona at a rich aunt’s villa. The first 10 minutes, in which the young ladies dutifully tour Gaudí’s city, are pretty dreadful. For one, the narrator sounds way too much like Rick Steves. And, if you haven’t watched an Allen movie in awhile, getting back into the fantastic wealth and stilted dialogue of his imaginary world can take some doing. Once again, Barcelona to the rescue: Bardem’s impetuous painter takes a shine to the ladies, and whisks them away for a dirty weekend on the northern coast. Vicky is unwilling at first—what about her reliable fiancée, and that new house in Bedford Hills (Allen reserves particular bile for New Yorkers house-hunting in Westchester County)? But Bardem’s very sexy painter gets Vicky into bed for one night, and Rebecca Hall gives the film’s best performance. She must choose between sense and desire, and in the process Hall becomes a wonderful instrument for Allen’s words. It helps that she looks like she could be Allen’s long-lost daughter; I really hope they work together again soon.

Though she is now Allen’s go-to muse, Scarlett Johansson never seems to quite fit into his world. Her delivery is not as natural as Hall’s, though she does pull off one of those quintessentially Woody Allen lines: “If you don’t undress me soon, this is going to turn into a panel discussion.” Johansson has not yet found a director that understands her as Sofia Coppola did in Lost in Translation. But she is predictably sensual, and after bedding Juan Antonio (Bardem) gets caught up in a love quadrangle with him, Vicky, and Juan Antonio’s unstable ex-wife, Maria Elena. Having most recently seen Penelope Cruz in Almodovar’s Volver, in which she played a sort of voluptuous mother goddess, her turn as a birdlike, cracked artist is notable. Her character is the kind of woman who seems only to exist in Mediterranean Europe: bad-tempered, frazzled, elegant and immaculately dressed all at once. They—Bardem and Cruz—share Johansson’s best scene, in which she laments feeling untalented and purposeless in their bohemian midst. The shifting power in their relationships feels very theatrical at this moment, and it sets up Johansson and Cruz’s hotly anticipated kiss. Fortunately, Allen does not go all dirty old man: the kiss is tender, wistful, and certainly not lurid.

It is this wistfulness that gives Vicky Cristina Barcelona what little depth it needs, that gives this story of expatriated desire some truth. Allen seems, at least for the duration of this film, to have moved past the Dostoyevsky-style angst of Match Point to a more Camus-like ruefulness. Or, again, Graham Greene: when Vicky objects to Juan Antonio’s advances on account of it being meaningless sex, he rejoins with something like, “You’re beautiful, it’s warm outside, and we’re alive. Isn’t that meaning enough?” “Meaning enough” is all Greene and Allen can muster the energy for, and maybe they’re on to something. Vicky Cristina Barcelona is often clumsy, though the trio of Rebecca Hall, Javier Bardem and Penelope Cruz keep it from falling apart. And it is definitely not a return to form. Rather, Vicky Cristina Barcelona is a small step forward in Allen’s late style: cynical, voluptuous, and more than a little sexy.