Lessons From a Film Set Extra

On the set of VEEP, mid-March. 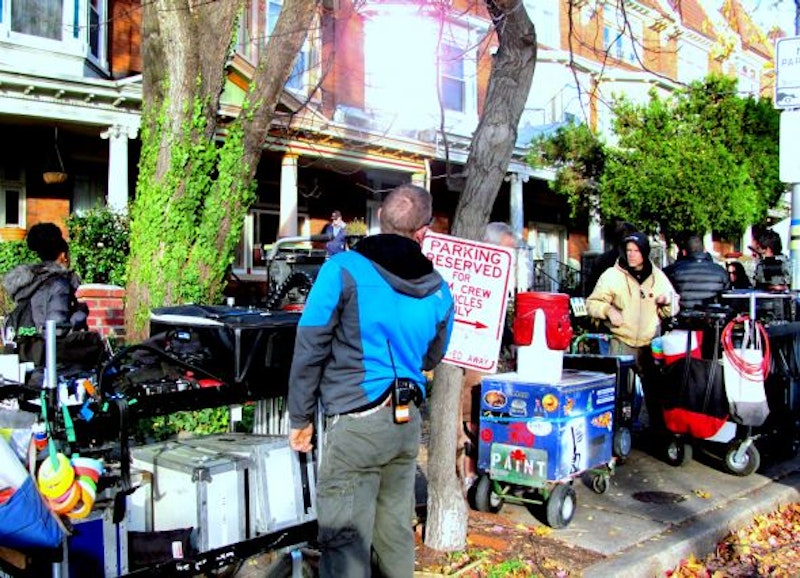 It's difficult to explain the experience of being on a film set to the uninitiated. I've had one prior experience on a set, acting as the second assistant camera to the second camera on a Nigerian soccer film which eventually ran out of money. Those days were not especially edifying. The heat soared to a blistering 100 degrees for a week. I worked in an open field filming countless takes of wooden dialogue from emotionless actors. But when I heard that the Julia Louis-Dreyfus comedy VEEP was filming in Baltimore and in need of extras, for some reason I signed up.

So my decision leads me to an unassuming spring day. I'm among a hundred other bodies in a tent at 7am. There's a breakfast that I'm wary of. Touring in a band effectively kills the functional glamor of Port O'Johns. Shortly after everyone's arrived we're addressed by one of four assistant directors. The man is a dead ringer for comedian Nick Swardson, aged by twenty years. Aging Nick presents a convincing front to a potentially long day that we've all willingly signed up for.

All extras were informed prior to call time that the scene is taking place in early spring time. I wear a coat which gets the stamp of approval from the Wardrobe Department. I should have expected that to be a red herring. A friend wearing an apple red Jackie O coat and mohair beret also received the nod earlier. When the clock hit 8 they march us out to a lake side track to wait for the race. Julia is going to lose a fund raiser race to a man in a wilting banana costume. The job is for some of us to clap and others to look dismayed. This information comes from a stranger who looks to be visualizing the depths of dismay.

When meditating, some people visualize grass rippling in the wind. Alternatively, you could stand around with strangers on a cool spring morning and actually stare at grass. It could have rippled for ten lifetimes for all I know. What I do know is that movie time is deceiving and our moment of communal Zen had actually happened in fifteen minutes. A van with Julia and other cast members rolled onto the set. A few cameramen spoke into walkie talkies to other cameramen. We were going to shoot. Things were moving on time and that prospect alone can have the amazing effect of actually stopping time.

Things started to go so well that we stood outside for another hour while a menagerie of production assistants gabbed about what the hold up was. While waiting I learned the following: the set of VEEP was notorious for its hold ups; it was wildly inappropriate that only coffee and hot water were exclusivley made available to union members; Julia was shorter than expected. I imagined she had the virtue of humor on her side.

Its nearly 11am but before they can roll there's one minor detail. "OK. Everyone take off your coat" a PA yells. I do it in an almost unconscious way. It doesn't matter that all the trees in the park have bare branches. It matters even less that every single extra will look uncomfortably cold on camera. Aging Nick consoles us with promises of lunch. I envision being told by an inside source that the meat dish is actually the runner in the chicken costume. His laughter is uncontrollable.

The runners jog in place to stay warm. The extras are offered extra T-shirts to wear. Together with the hand warmer packets my body temperature actually feels like it's rising. There's also the possibility that it's simply fever coming on. Julia runs by looking just as uncomfortably cold. A banana is making a last second break for the finish line followed by a portion of grapes. Secret Service men are hobbling behind, one clutching his groin the whole way. A miraculous thing happens after a few takes: lunch is called.

The lunch spread for VEEP, it must be noted, is pretty decent. There's no spice rack at your table but being on a film set is not like being at the Olive Garden. The extras look defeated. They've received what they've asked for already, to see a TV star in the flesh; the rest is going through the motions. Lunch is over and I've got five more hours of standing jacketless amongst dead trees ahead of me. Jackie O asks me where the man in the chicken costume went as we hover over our last bites of meat.