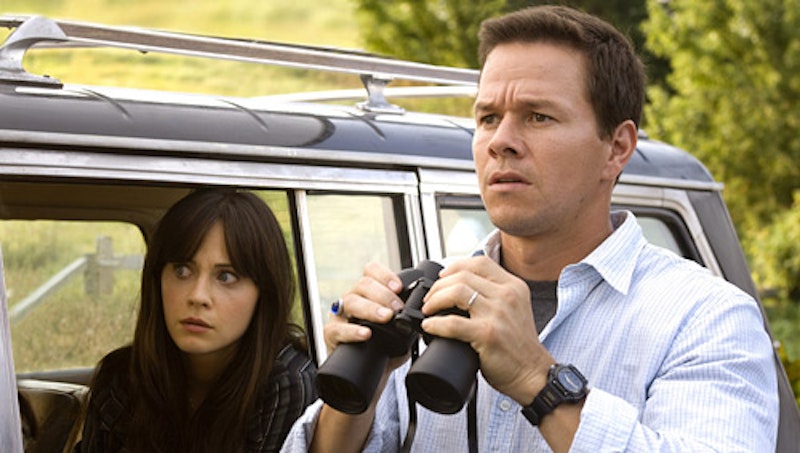 I’m not going to say that M. Night Shyamalan’s The Happening was an amazing movie. It’s impossible to say that anything with Mark Wahlberg’s smarmy stink all over it is amazing. His perpetually angry, unsmiling befuddlement in everything he’s ever appeared in is endlessly entertaining for all of the wrong reasons. But I don’t think that The Happening was a bad movie. Wahlberg does.

Cinema Blend gleefully reports that Wahlberg was recently quoted as saying the following during a press conference for The Fighter:

Fucking trees, man, the plants. Fuck it. You can't blame me for wanting to try to play a science teacher, you know? I wasn't playing a cop or a crook.

Good for you, Mark Wahlberg. Good for you. You get an A for effort. It’s pretty obvious to everyone else that the best way to avoid being typecast is a subtle elevation of your characters into increasingly diverse roles, and not to leap right into a role that suits absolutely no aspect of your personality, ability or appearance. That worked once, ever, with Michael Keaton’s Batman. He used it all up. Time to try something different.

So maybe I have a very heightened ability to suspend disbelief. I have faith that the intent behind most ideas is completely pure, and I have the innate, stupid ability to ignore all of the flakiness around this nucleus of inspiration and attempt to see the meaningful core of everything, even if that completely discredits me as a critic. I’m bitter about a lot of things—my hairline, ex-girlfriends, that SoBe Zen Blend is no longer made—but my brain is always fighting for the artist’s heart. I didn’t even hate Lady in the Water like everyone else did. So, I have a deranged affection for The Happening. I’m sorry.

Most people hate the film because of the wooden acting, and a few cinephiles criticize camera angles and directorial decisions. I can’t argue against these points, but most miss the point completely, like this amateur critic on IMDB, who left a one-star review:
“The sub-text of the film, which is meant to lead us to the theme—mankind is destroying the planet, is blatant and lacks finesse.”
That’s not the point, Jean-François Adams. The point is something that we should all acknowledge: we don’t know. The subtext runs far deeper than the obvious “stop using so much hairspray” bullshit. When you peel away all of the thick, greasy layers of stupid, it’s about the very Zen subject of unknowing.

For as much as we know about the “fucking trees”, as Wahlberg so eloquently put it, we don’t know what comes next. We don’t know what that planet’s going to do, or what outside forces are going to act upon it, and all we have for comfort is the idea that a system attempts to remain in equilibrium, which itself is a scientific idea that we invented based on our very limited experience with the universe. We don’t know what part we play in this system—if we are the system, or if we’re a microscopic, inconsequential cog in the system. We are comforted by our science and religion, and we’re assured that we know a lot of very useful things that will keep us alive, but we rarely talk about how much we don’t know.

Will the trees decide that we need to be thinned out someday? Will the sun flip out and kill us all at once? Will Jesus Martians return to Earth to save us from ourselves and Sarah Palin’s Alaska? We can measure all we want, but measurements taken in our own closed system, with devices we’ve invented to tell us what we want to know in our language, aren’t really going to save us.

Is this what Shyamalan was trying to say? It’s probably a huge stretch, but even more essential than what the artist intended is what the viewer extracts from the art. Maybe he just made a goofy movie about magical trees. I’m not about to give any credit where it’s not due.

But seriously, Wahlberg. Badmouthing a film you’ve been in is just as bad as criticizing your last boss at a job interview. Like most of your non-professorial roles, it lacks class.