I Bet You Never Saw That Coming

The Disappearance of Alice Creed (released on DVD this week) is a film firmly bound to the iron headboard of its own plot twists. 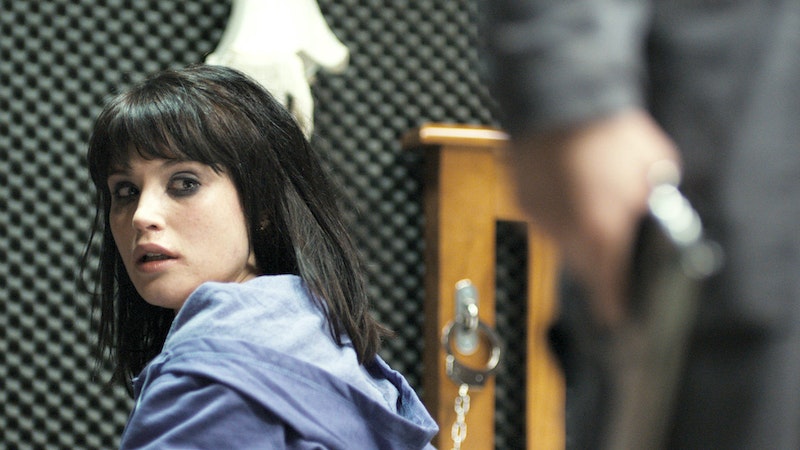 The putative narrative involves two criminals, Danny (Martin Compston) and Vic (Eddie Marsan), who, with much methodical preparation, kidnap heiress Alice Creed (Gemma Arterton). In fact, the story and characters are all of secondary interest; the main protagonist is the surprise reveal, which slinks seductively through the claustrophobic interiors, occasionally whipping its ski mask off to bellow “booga booga!”  The first shocking revelation...

I’m going to spoil everything. The film was released in 2009 in Britain, and the whole plot is on Wikipedia. So sue me. Leave now if that bothers you.

Anyway, as I was saying, the first shocking revelation is prepared with some care. Danny is obviously affected by Alice’s capture, and seems to be lusting after her… and then we discover that Danny is Alice’s boyfriend, and set her up (without her knowledge) so that the two of them could get her dad’s money. It’s a nice complication, and Danny’s character is at least reasonably consistent. The next surprise, though, is a lot less earned—Danny and Vic, we find out, are lovers, who for some unknown reason have not behaved at all like lovers through the first third of the film so that we conveniently learn that Danny is Alice’s lover first, thus making the revelation of his perfidy shocking through the very effective expedient of making it completely unbelievable. After that, the plot see-saws merrily back and forth as Alice, Danny and Vic all lie to and are duped by one another until the final scene where Alice has escaped in the getaway car. There’s only five minutes left, so can they get the final twist over with? And yep, they throw one in… and then another. Maybe there’s a final one at the end of the credits; I’ll admit I didn’t sit all the way through them to find out.

Which is not to say that this is a bad movie. On the contrary, director J. Blakeson gets sturdy performances from his three-person cast. Arterton, for example, does a very nice job with that last, end of movie reversal, which is done entirely through facial expression; you see the moment where she looks at the money in the seat beside her, looks at herself in the rear-view mirror, and decides to do the suddenly obvious thing. Martin Compston plays Danny as a sympathetic slimeball, whose main talent is begging for his life and betrayal. And the film itself is stylish and confident; the opening five minutes, in which the kidnappers prepare their plans, is entirely wordless. The two men working in almost eerie synchronicity is both a nicely ominous intro and an ironic contrast with the paranoid clusterfucks to come.

Indeed, if the movie were not so well designed, it probably couldn’t be quite so soulless. This is a remarkably focused delivery system—a film that is absolutely ruthless in its pursuit of its puzzle-box pleasures.  Usually even plots that are there for the twist also throw in something else—paranoid noir misogyny in The Last Seduction, for example, or the bedrock moral condemnation of evil that animates Agatha Christie’s books. But there’s no such shilly-shallying in Alice Creed. Love, death, sex, fear and personal idiosyncrasies are all marshaled solely in service of the pleasurable switch-back. The cynicism of the undertaking is a little numbing, but even so it’s hard not to admire the efficiency of the mechanism.