Just How Bad Is The Green Hornet? 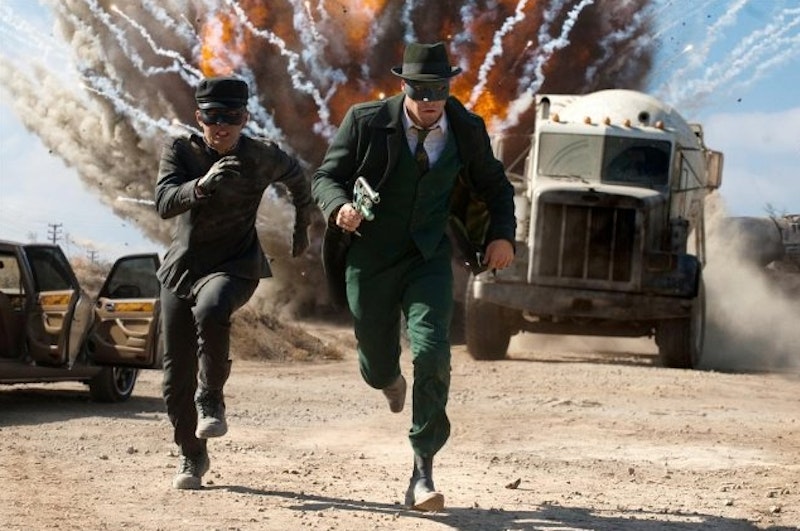 Just as the college nerd comedies of the 1980s eventually ran out of steam with the likes of Real Genius and Weird Science, so too does the Judd Apatow-influenced “manic doofus bromance” sub-genre seem to be gasping for survival. Latest example: The Green Hornet, a largely incomprehensible stew of meta-commentary on superheroes who want to blow stuff up real good and simultaneously comment on the inanity of it all. It may have topped the weekend box office by trouncing the only other newcomer, The Dilemma (frankly, so could you and I with a digital camera and some riffing about the Golden Globes), but in a couple of weeks it will be mercifully forgotten.

It didn’t have to be this way. The project had bounced around for years—George Clooney, Mark Wahlberg, Kevin Smith, Nicolas Cage, and Stephen Chow were all attached at one point or another—but with one apparently unsolvable dilemma. How to reintroduce a dimly-remembered crime fighter and his Asian sidekick—most memorably played by Bruce Lee in the 1960s TV series that effectively introduced his protean talents to U.S. audiences—to an audience that’s been over-saturated in masked crusaders over the past decade or so?

Along with Jonah Hill, Rogen’s been the biggest beneficiary of Apatow’s largesse, thanks to Knocked Up and Pineapple Express (itself another uneasy mixture of low-brow humor and sometimes over-the-top violence). Rogen took an intriguing sideways turn with the Taxi Driver-influenced Observe and Report, losing the cuddliness to play the kind of quite possibly deranged individual that’s more in occasional co-star Danny McBride’s comfort zone, before returning to the Apatow fold for the auteur’s James L. Brooks wannabe Funny People, from which no light escaped.

Hornet is also officially Apatow-free, but his influence hangs all over it. Rogen is Britt Reid, playboy heir to his father’s newspaper (and thus living in a mansion that looks like it belongs in Dubai instead of Los Angeles). Once the old man dies in mysterious circumstances, Reid hooks up with mechanic/coffee-making wizard Kato (Jay Chou) to make something of his life—that is, donning a secret identity to fight crime.

Along the way Reid and Kato enter the kind of thinly-veiled homoerotic relationship familiar from such previous works as Superbad and the Apatow-influenced I Love You, Man. That they openly make fun of any such misconceptions only underscores the conceit, in one of the film’s rare successful stabs at subtlety. (They both claim to have crushes on Cameron Diaz, in the thankless role of Reid’s gal Friday, but their only truly intimate moments are with each other.)

The film’s first half hour or so works best, but from that point it sinks into a morass of mismatching parts. The buddy-movie angle is stymied by the fact that Kato is an infinitely more interesting character than Reid, who spends most of the film making “Wow, that’s cool!” remarks about Kato’s latest inventions (including building three heavily-weaponized cars from scratch in less than two weeks). The mix of comedy and action never aligns, as it did in last year’s far superior The Other Guys. The CGI is fairly well done, as you’d expect of a film directed by Michel Gondry (Eternal Sunshine of the Spotless Mind), but the action scenes never feel like anything’s at stake, even when some of the bad guy’s henchmen are creamed in extremely brutal ways.

The confusion is nowhere more apparent than with Christoph Waltz’s master criminal, Chudnofsky. He’s the head of all criminal operations in L.A., see, yet he’s easily offended and unsure of how to present himself, before finally deciding he needs an alter ego of his own. (Making things even more ridiculous is that, even though he’s the one guy behind all the crime in the metropolis, no non-criminal has apparently ever heard of him.)

The whole thing ends, of course, with a massive guns-a-blazin’ chase through the streets of Los Angeles (with non-involved cars politely pulled to the side and going a steady 20 m.p.h.; action is not Gondry’s strong suit) that ends in a hugely overblown gunfight at the newspaper’s offices. That all this hinges on the contents of a flash drive disguised as a piece of sushi is treated with the dismissiveness that it deserves.

It’s a sloppy, lazy film whose long gestation weighs heavily on its attempts to be light-footed. For every bit that works—a long, kitchen-set fistfight between Reid and Kato that seems to be a nod to those battles between Inspector Clouseau and his own Cato; the admittedly cool things that their customized “Black Beauty” cars can do—there are dozens that don’t, from Chou’s painful line readings to the naming of The Green Hornet himself: Initially caught on videotape doing a bit of vandalizing, the newspaper’s editors agree with Kato that he should be called “The Green Hornet.”

Um, why? That’s as good an epitaph for The Green Hornet as any.