And The Truth Shall Make You Rich 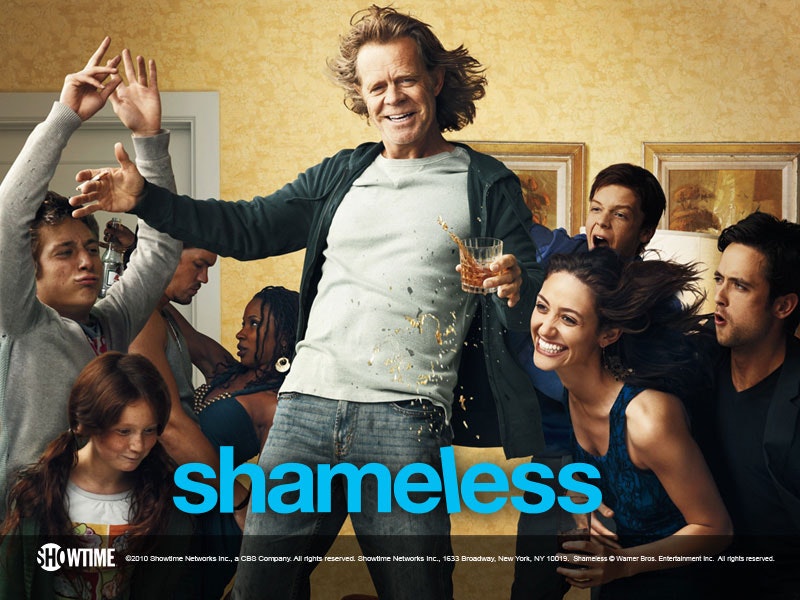 Showtime’s raunchy new dramedy series, Shameless, about the Gallaghers, an urban, lower-middle class dysfunctional family, premiered last Sunday, and over the course of 55 minutes the show has become my favorite thing of 2011. Daddy Gallagher’s an alcoholic. Fiona, the oldest sister, takes care of the whole family. The middle son Ian is a gay, and the oldest son (Phil)Lip is some kind of math genius who gets sucked off within the first 10 minutes of the pilot episode. There’s a free-spirited interracial couple next door that has loud sex and comes over whenever they want. The house is a complete hot mess, nobody can pay the bills, the washing machine doesn’t really work and wobbles from side to side when it’s on.

And then there’s the refined, rich, well-educated dude who’s trying to get with Fiona. They have really exciting sex in the dark on the sink, then the floor of the messy kitchen. A cupful of apple or whatever juice spills over.

For all its ridiculousness, Shameless feels brutally honest. And one way this adaptation of the long-running British series achieves that is through its portrayal of the lower-middle class. The show comes at a time when much, but certainly not all, television programming about family life is or has been stuck in an upper-middle class world where it’s a given that everybody makes six figures. People rarely talk about how much money they earn on television, and revealing how much you make is still a pretty awesome taboo in the broader stretch of American culture.

But on a recent episode of Modern Family, Phil Dunphy, a real estate agent, says he’s about to sell a house for $1.5 million. Maybe I’m alone here, but that number stuck with me as completely unrealistic for the way that most Americans live, and it totally unraveled for me the popular television myth that class doesn’t matter and everybody makes six figures or is a doctor.

Shameless, on the other hand, keeps it real. I don’t want to dwell too much on class here, but the Gallagher family is believably financially strapped, which adds a level of realness to the series. It joins other shows like Sanford and Sons and Roseanne in its depictions of people working to make ends meet. This is the real modern family. From the way the Gallagher house is designed, with old furniture, a filthy refrigerator, to the clothes they wear, the whole vibe is “hand me downs.” It’s like Hoarders meets Roseanne as Sex and the City.

Some critics have panned Shameless for being too in your face, too over the top, too too. Brian Moylan over at Gawker had this to say about the new series: “The real problem isn't the raunchiness, it's the show's unending quest for edginess. The writers seem to think that the more outrageous they are, the better their show will be.” His bigger point is that a show doesn’t have to be raunchy to do well.

But guess what? People are raunchy! Everybody does secret, sketchy stuff all the time; it’s just nobody talks about it. The raunch didn’t bother me at all. It actually kept me watching, and eventually I got over the boobage and started caring about the characters. It’s hard for a new series to get an audience to care about the characters within the first episode. But more than anything—and judging only on the pilot, who knows what’s to come—I think the stories are brutally honest and bring us down from the fantasy world of similar family dramedies. How does that age-old saying go? The truth hurts.