Nick Jenkins' Throw a Billion Dollars From the Helicopter is a great documentary about Arlington corruption and democracy gone wrong. 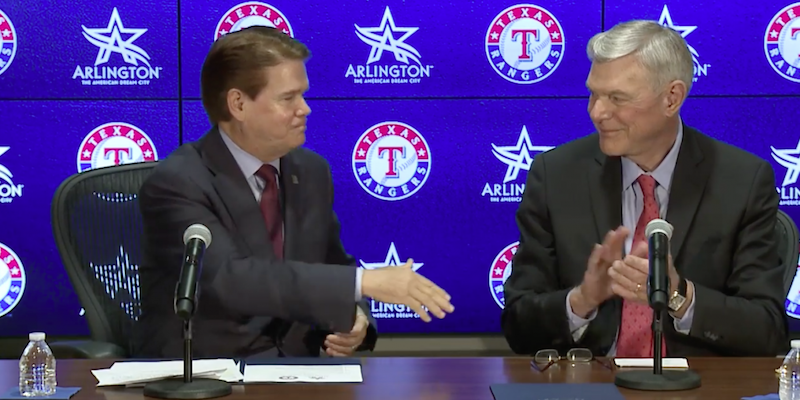 I rarely watch movies—let alone enjoy one. But a filmmaker named Nick Jenkins sent a worthwhile one my way called Throw a Billion Dollars From the Helicopter.

Jenkins saw that I've covered the taxpayer-funded stadium issue in opinion pieces for The Washington Examiner and let me watch the film early (it's out on Amazon Prime and Vimeo now). For anyone interested in the topic, it's fascinating. If anyone supports taxpayer-funded stadiums, then tell them it's a film about how licking the boots of big business is great to get them in the room.

The film focuses on the Texas Rangers' new stadium, set to open this year: Globe Life Field. It replaces Globe Life Park at Arlington, built with taxpayer dollars (opened in 1994). The new stadium cost taxpayers $500 million. It's one of the most egregious examples of a taxpayer-funded stadium yet.

The city of Arlington approached the Rangers in early-2016 about building a new state-of-the-art facility despite Jeff Williams, the Republican mayor, never campaigning on the issue. The grassroots campaign against the new stadium came in part from Citizens for a Better Arlington, a handful of small government right-wingers who previously led successful opposition against red-light traffic cameras. Both issues are examples of the stark divides on the right. In Massachusetts, for example, all four Republicans in the state Senate voted for red-light traffic cameras but the Democrats were split and voted it down. And then on the stadium issue, there’re free marketeers and populists on the right who don’t like taxpayer-funded stadiums—but corporatists who do.

The film shows how corrupt the Rangers’ stadium scheme was. The group who favored the new stadium, a PAC that received a $500,000 donation from the Rangers, falsely promised no tax increases. Plus, the project used $50 million from the Arlington Tomorrow Foundation—normally used to support local charities and services in the community. For example, in 2018 it contributed money to a school for kids with learning disabilities, a neonatal section of a hospital, as well as services, “that aim to increase access to healthcare, food and affordable housing, provide school supplies, bicycles, and safe after-school activities for youth, and enhance the city's cultural and recreational opportunities."

Imagine what $500 million could’ve done for those types of programs rather than shilling for billionaire owners. Additionally, there was never a formal debate on the topic between the mayor of the city and a notable opponent, and he tried his best to bat away citizen journalists who wanted to question him on the topic. In politics, it’s not all that uncommon for sides to have certain issues where they can’t give you an answer. If someone asked Donald Trump or a GOP leader what their healthcare plan is, odds are there would not be a satisfactory answer provided. Same goes for if you asked Elizabeth Warren what’s the difference between a boy and a girl, or when life begins.

Perhaps the most important part of Throw a Billion Dollars From the Helicopter is that it features economists talking about how bad a deal the stadiums are not only for people in Arlington but anywhere in the U.S. Some people like sports, so they might be willing to pay extra for a stadium in their community, but many are downright misinformed. That’s part of the reason why Arlington’s government deserves criticism for making the stadium a referendum vote on Election Day in 2016. Some might disagree with that statement saying that democracy is inherently good, but it’s dangerous when people vote on something they don’t fully understand. That’s also why compulsory voting isn’t a great idea. But most people in politics are unremarkable and often irrational; this documentary is yet another reminder of it.

Information on why taxpayer-funded stadiums aren’t a good investment for communities must be readily available to people so they don’t continually make the same mistake.