When You Finish Saving the World asks if it's okay to be apathetic about politics. 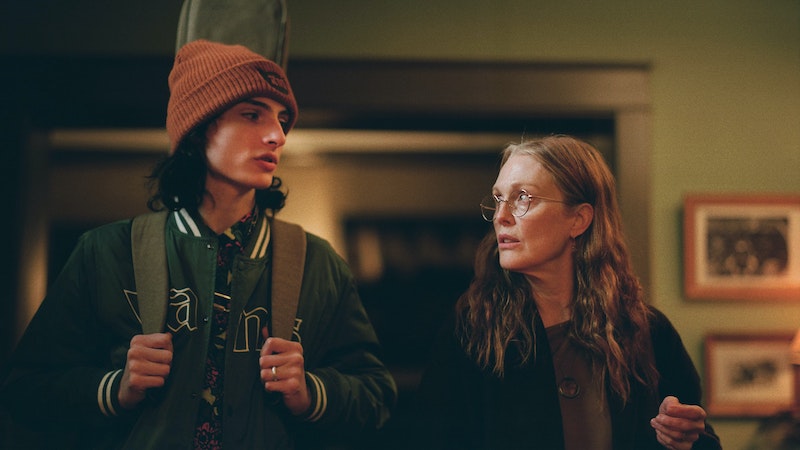 Is it okay to be apathetic about politics? That's the question raised by When You Finish Saving the World, the directorial debut of actor Jesse Eisenberg that finally lands in theaters this week a year after its Sundance debut. Based on Eisenberg's Audible podcast series from 2020, it's an odd film, which appears to be confronting and satirizing a political moment from a very different time.

Stranger Things star Finn Wolfhard is protagonist Ziggy Katz, a part Eisenberg undoubtedly would’ve played himself if he were younger. He's a 17-year-old in a cosmopolitan area of Indiana, who’s earned some notoriety as a singer-songwriter on a fictitious equivalent of YouTube, where adoring people all over the world tune in to his livestreams. Even if his guitar is out of tune more often than not.

Ziggy's problem is that he doesn't care about politics, and the bleeding-heart liberals all around him do. His mom (Julianne Moore) is a social worker who runs a domestic violence shelter. His dad (Jay O. Sanders) warns him against cultural appropriation in his music, even though all he's doing is playing basic, inoffensive guitar-based folk. And all the people he goes to school with, starting with the girl he likes (Alisha Boe), are constantly talking about esoteric and far-off political causes, and occasionally giving him trouble for avoiding political themes in his music. Should Ziggy stick to his apolitical stance? Can he get away from it, without making it obvious that he's faking it and has no idea how to talk the way activists do?

Wolfhard’s a capable performer and I was somewhat invested in his plight. Moore gets a fascinating but disconnected subplot, in which she mentors a teenager who she pushes towards a college track. The mother-son relationship is underdeveloped, as if important scenes were cut out of the movie.

But what’s bizarre about this film is that it’s so far away from today’s politics. While the YouTube-style material places the movie in the present, this version of liberal activism reminds me of the late-1990s, when campus activists were into specific, far-off causes (“Free Tibet,” and the 1999 Seattle protests).

Say what will about the leftist activism today, but it doesn’t look anything like that, and in an age where everything is politicized (and voter turnout breaks records in every election), you can’t accurately call out widespread apathy. Is the point that young liberal men are faking it in order to get into the pants of girls they like? Maybe, but that’s a thin reed for an entire movie to rest on.

The film does get at one dynamic that’s very real. Famous people, in particular, are often pressured to take political stands. And at other times, when they do, they're often criticized, by both sides, calling them insincere, or being “performative." Taylor Swift in particular, at various points of the past decade has been on almost every side of this dynamic, from being criticized for not backing Hillary Clinton to eventually speaking out on behalf of Democratic candidates to getting denounced as a “white feminist.”