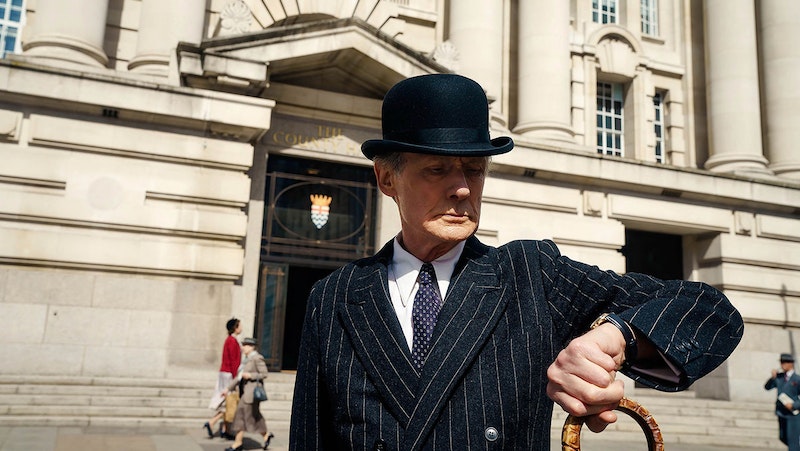 A year after debuting at Sundance 2022, Living has arrived in American arthouses, single screens, and multiplexes that aren’t stuffed with blockbusters or long-running Oscar contenders. I’m not sure why Sony Pictures Classics didn’t push Living at all during awards season; although it qualified with a 2022 premiere, it got dumped in the beginning of January, along with new Tom Hanks gruel and cyber sleaze M3GAN. In a weak year, or at least a year without Brendan Fraser and Colin Farrell, Nighy would have a good chance at his first Oscar with his performance as Rodney Williams, a bureaucrat in an accounting office who’s lived a long life of taking the path of least resistance. It’s one of the most spare and emotional performances from an actor most known for his dry wit and effortless savoir faire in British and American productions. Even in 2013’s About Time, where Nighy has a family and a terminal illness, he’s really rather blasé about it, at least on the surface.

Rodney Williams is no such creature: like Takashi Shimura in Kurosawa’s film, Nighy plays a man cut down and shrunken by the world around him, someone so sensitive the only reaction they can manage is near complete dissociation. After given a fatal prognosis, Rodney starts wandering around, encountering the same sort of people in Kurosawa’s film. He learns to live for the first time and goes out boozing and singing; he befriends a young female colleague, and their innocent friendship becomes the subject of heated gossip and consternation from his son and daughter-in-law; after he dies, another colleague of his runs into a policeman who confesses he saw Rodney singing to himself on the playground he spearheaded; the famous image of Shimura alone on a snowy swing set is recreated here with Nighy in gloriously faded imitation Technicolor.

Kazuo Ishiguro wrote the screenplay for Living, and I suspect he’s largely responsible for why it works so well, despite being a remake of a classic film: Ishiguro was born in Japan but raised from early childhood in Britain, and from the beginning of his career, everyone always asked him about Japan, a country he knew almost nothing about directly. Everyone assumed Ishiguro had the Japanese pulse pinpointed, but he was just as much a boarding school Brit as any of the actors in this movie. Ikiru makes sense as a British remake, not an American or Canadian one, because so much of the social etiquette is similar. But there are crucial differences demonstrated in both films: when Nighy dies in Living, his co-workers realize how important and honorable he was during a muted discussion on a train ride; in Ikiru, Shimura’s colleagues flagellate themselves over a drunken dinner, crying about how wrong they were to ignore his private suffering.

In both scenes, they pledge to continue his legacy; and both films deny the easy way out, and correctly portray what would actually happen: everything goes back to normal, and the only person with any courage to challenge the status quo simply doesn’t have enough. Both films deal with emotional repression as the locus of all suffering, manifest in cancer and social alienation. Both British and Japanese protagonists die silently as everyone around them talks behind their back, petty thieves of polite society, and as soon as the funerals are over, it’s time to get back to doing nothing brave at all. They’re not living. When Nighy and Shimura are singing alone on that swing set in the snow, they’re as alive as they’ll ever be.

Oliver Hermanus directed this fine adaptation, with excellent cinematography by Jamie D. Ramsay; shot in 1:37 Academy Ratio, Living opens with 1950s-style title cards and has the look of certain postwar British color films—not the vibrant Blithe Spirit, but This Happy Breed. There are a number of striking compositions, particularly the dozens and dozens of setups where we see characters through mirrors, door cracks, and the glass of a grandfather clock, but it gets a bit pedestrian and non-classical whenever it’s two people talking in a restaurant. They nail the important shot, though: craning in on Nighy singing an old Scottish song, reminiscent of “Tammy” as sung by Connie Francis, the snow falling, all you can ask is why the fuck didn’t Sony Pictures Classics not push Nighy for Best Actor? They didn’t have any other major releases this year, and Living may be a remake of a classic Japanese film, but frankly, it’s just about as good as one of those could possibly be! I went with my parents on a Sunday afternoon—neither of them had seen Ikiru, I had, and we all liked it. This is the movie families should be seeing this weekend, not Colonel Tom Hanks.