Tron Is Smarter Than You Think 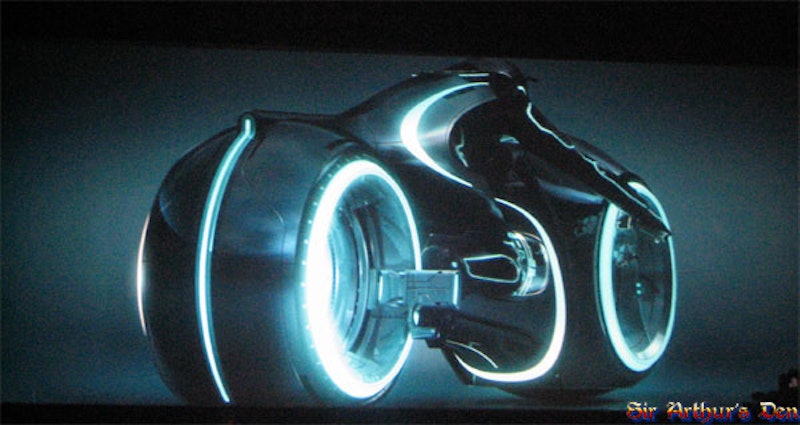 Brainy blockbusters are rare. For every Inception there is a Sorcerer’s Apprentice. The most we hope for in our big-budget spectacles is some decent writing and a couple of big bangs. Usually, we don't even get that.

Critics have put Tron Legacy in the Sorcerer’s camp. Both Disney films have been branded “empty,” “cheesy” and “silly” by various writers.  But I’m here to defend Tron: it’s smarter than it seems.

First, the basics. The story about a young boy, Sam, whose father, Kevin, disappeared when he was a child, Tron Legacy follows Sam’s story as he reenters his father’s game of the same name to find him and save the network from a fascist program, Clu, hell-bent on control and perfection. In the real world, Kevin’s company, Encom, has turned into Microsoft, a monopolizing behemoth releasing secure operating systems in the style of Windows.

What’s so special about this film? Like most blockbusters, there’s a whole lot of non-special aspects: the storyline’s a pastiche of other ones (Fifth Element, Pocahontas, and The Matrix, for starters); the plot is all over the place, but vaguely about fathers and sons and corporations versus the people; and of course our lead is a boy who needs to find his purpose, a conceit seen in every other big budget feature made in Hollywood. Yes, the visuals are amazing (I’m telling you, it’s gorgeous!) but there’s a lot of retreading in Tron.

But Tron sharpens the social critique of the first installment: more so than many other dystopic sci-fi thrillers, Tron is a clear cautionary tale of the state of the current digital economy. Our current debates over net neutrality, Facebook, Apple and the continued diversity of the web are all wrapped up in Tron’s allegories.

The first Tron was one among a long line of seventies and eighties films about fears over technology, fascism and government and corporate control over society and media (Videodrome, Brazil, Blade Runner, V, 1984, War Games, Network, etc.). Steeped in rather ridiculous concerns about the loss of the “real” and the end of the Cold War, these films are great but feel a bit dated today, a bit too “postmodern.” Their critique of society was soft.

With the growth of the web, however, some of these fears started to seem justified: corporations really do have access to vast stores of information about people and they are cementing their power (by lobbying, for instance, against net neutrality). While the first Tron had vague concerns about the “user” and master control, when Tron Legacy’s Tron yells at the end “I fight for the user!” it means something more.

How does the new Tron participate in these debates over the future of the digital?

Tron Legacy’s script was probably written about four to five years ago, back when the big rivalry in tech circles was Google versus Microsoft. Google championed openness, allowing the user some degree of control. Google was releasing its “Docs” for free as a challenge to monopolistic, controlling Microsoft, charging ridiculous fees for Windows and Office.

The opening scenes of Tron mimic this debate. Sam, who owns Encom (read: Microsoft) but doesn’t control it, hacks into the company’s mainframe and releases their OS for free on the web. The company was releasing its twelfth version of the system, charging more money for essentially the same program (read: Windows).

Then, Tron Legacy takes the debate to fantasy land, inside the game, where Clu (played by a CGI’ed Jeff Birdges), a program meant to create a utopian virtual world, has turned into a controlling fascist, wiping out communities and creating an army to control society. Clu is the virtual Encom. Sam is the user, the hacker, the idealist whose job it is create diversity, embodied in Quorra (Olivia Wilde), a digital mutation unwelcome in Clu’s dream of monopolized perfection.

Tron Legacy’s dark aesthetics (we only see the sun in the end) reflects growing concerns over the death of the digital utopia. We see the same concerns in this year’s Social Network, a similarly cynical and dim feature about the fading promise of the digital revolution, its retreat into the same corporate monopolies of the 20th century.

Why is this smart? Tron Legacy plays the cards right. Bringing back the aging hippie in Jeff Bridges reminds us the first digital prophets of the sixties and seventies were counterculture idealists who believed in openness and freedom. Bridges’ Kevin in the film is zen pacifist, a caricature but a true one. The counterculture ideology has always been at the heart of digital culture (see the book From Counterculture to Cyberculture) but it’s one that’s dying, perhaps already dead.

The leading tech companies today are led by huge cultural figures, many of whom have spoken, at one point or another, about the democratic potentials of new media: Steve Jobs (Apple), Mark Zuckerberg (Facebook), Bill Gates (Microsoft), Sergey Brin and Larry Page (Google).

Like the CEO of Tron’s Encom, though, the now-billionaires have realized idealism isn’t too profitable. Apple is essentially a closed network (Clu’s virtual world). Facebook controls how profiles are made and, at times, what information gets shared. Scholars are writing how Google actually facilitates inequalities online (see the book, The Myth of the Digital Democracy), and of course caused a stir this year by seeming to waffle on its net neutrality promises. We all know about Microsoft.

Tron tells us these companies aren’t “evil,” they’re just companies. It offers no solutions except to start fresh, which isn’t possible, of course. Yet it also offers the fantasy of a younger generation who’ll attempt to keep the digital as open, non-hierarchical, diverse and user-friendly as possible.

Other glowingly reviewed blockbusters, chief among them Avatar and Inception, were so lost in their own hall of Freudian mirrors they completely bailed on their corporate intrigue plotlines (which wereactually really interesting!); and Avatar’s environmentalist theme was about as inventive as the one in The Day the Earth Stood Still, perhaps less so.

Is Tron Legacy a work of genius? No way. But it is a rare example of a big budget feature intimately in conversation with cultural, political and technological history.