The love of the con in I Love You Phillip Morris. 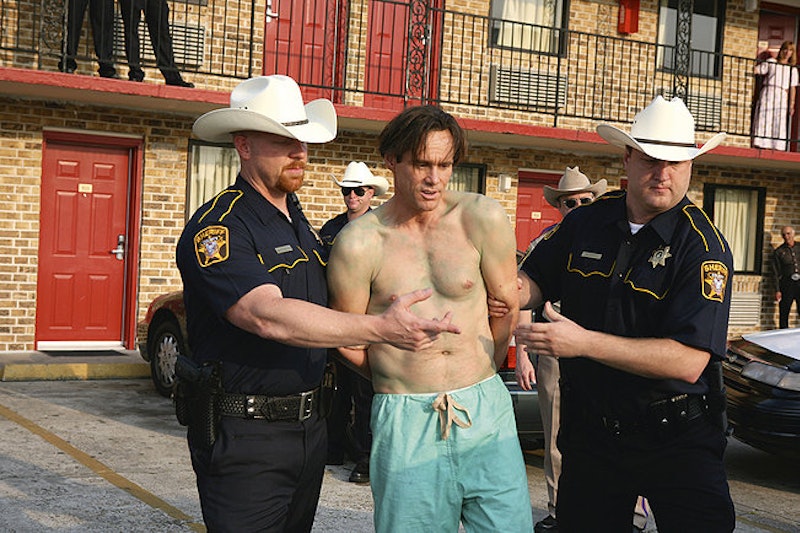 Let’s be clear about something: I Love You Phillip Morris is not “brave” or “transgressive” or “fearless.” Such red-cheeked praise has been tossed the movie’s way because, not 10 minutes in, the camera settles on Jim Carrey having big, exuberant sex with a man sporting a porn-star mustache. Furious thrusting and loud orgasm ensue.

This helps explain why the movie, completed for more than two years, has been released nearly everywhere else in the world except the United States until this month. The scene itself is designed as a revelation: We meet Steven Russell (Carrey) as an otherwise straight (-laced) policeman with a pretty blonde wife, but before long, the camera pans mid-thrust during a nondescript sex scene to reveal an older, sweaty… dude. It’s purposefully unexpected, but certainly we’re past the point where it’s “brave” merely for a movie star playing a gay guy to have sex with another guy on screen. What else is he supposed to do?

Besides, this genial, exceedingly cheerful caper relies on a lot more than guy-on-guy to screw with its audience. Adapted from a nonfiction book and directed by Bad Santa scribes Glenn Ficarra and John Requa, the movie follows Russell as he finally acknowledges his sexuality after a car crash, heads to southern Florida and starts living with a man. He suns, he struts and, fatefully, he steals. (“No one ever really talks about this,” he moralizes, “but being gay is really expensive.”) Several fraudulent insurance schemes and many other felonies later, he’s finally busted and sent to prison.

The movie’s subsequent gloss on prison life is deliberately vague and sunny, a somewhat misguided wink at the pervasive gay jokes and victimization that come with the space. When Steven repeatedly informs a new cellmate that he can pay for services from other inmates in cash or “suck his dick, your choice,” the line is played over and over for laughs. The queasy homo panic mostly subsides when Steven falls for Phillip Morris (Ewan McGregor), a fellow prisoner who’s all eyelashes and flummoxed Southern charm. After a few meet-ups at the prison library, the couple is inseparable. Once their sentences expire, they begin a life together, largely financed—unbeknownst to Phillip—through a new high-stakes money-laundering scheme.

Carrey and McGregor forge sincere intimacy as the couple, a sweet rapport that, at least as first, affords the movie some authentic heart. The performances are less “fearless” than invested. Carrey’s cranked extroversion fits Steven easily, and McGregor, whose sexuality on screen knows few limits, gives Phillip an appealing, aw-shucks doltishness all the more vivid given his surprisingly constrained screen time.

Phillip Morris gleans much of its energy from the thrill of the con—the classic, unapologetic structure that encourages a sense of collusion, the con man as folk hero. The film stacks breezy sequence after sequence on Steven’s scrappy ingenuity, whether he’s ripping off white-shoe suds at work or busting out of the joint with enviable style. They are so much fun that everything else starts to feel like a bummer, particularly a little more than halfway through, where the momentum dulls to a mute register and the central love story becomes so absent that the movie comes dangerously close to abandoning its soul.

Ficarra and Requa direct uneven bursts of action (there are numerous montages) that underscore how stagnant the less mischievous sequences can be. Steven, in voice-over, also proves to be a chronic unreliable narrator, injecting the movie with relentless conceit and guile. What appears to be happening rarely actually is, and Ficarra and Requa employ overextended melodrama to mislead us just as our protagonist intends. The gimmicks betray the film’s limitations, but in fairness, by the time we arrive at the epic, evidently factual final swindle, the payoff is irresistible.

What’s more difficult for Ficarra and Requa to pin down is the resonance—and the point. The beguiling warmth Carrey and McGregor generate becomes muddled with the carefree irreverence of Steven’s crimes. The movie announces its subject in its strident, declarative title, but ultimately we’re left unsure if this is really a love story or just the sad tale of a man bent on pulling off a con so transcendent that it will somehow prove his love is really true.