Ample entertainment for stay-at-home moms with laundry to fold. 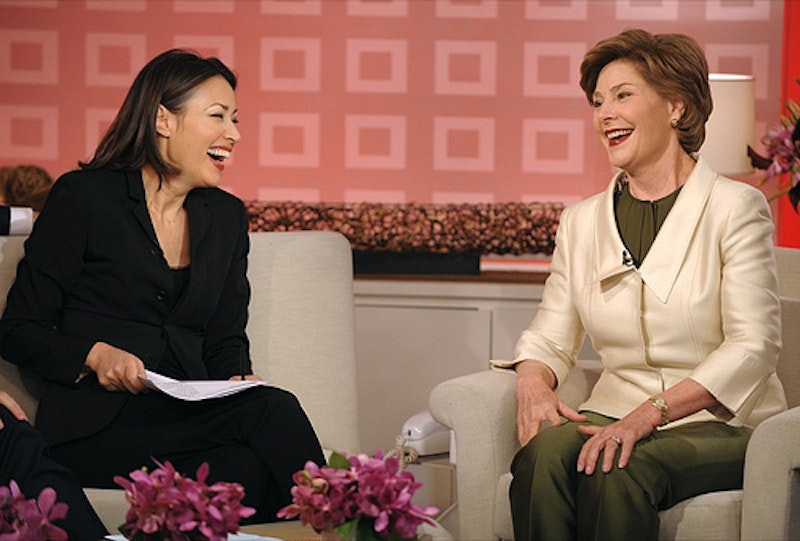 Have you gotten a load of the walking dead on CBS yet? No, not The Walking Dead zombie series on AMC. I’m talking about Harry Smith, Maggie Rodriguez, and Dave Price on CBS’ The Early Show. Even though the trio were in effect fired at the end of November, there they remain, at least until Jan. 3: The congenial Smith, the non-entity Rodriguez, and the very personification of “wacky weatherman” Price, still conducting inane celebrity interviews, boiling water for cooking segments, and occasionally recalling that there’s actually news out there that viewers might like to know about.

They’re still under contract, of course, so one can’t realistically expect a Howard Beale-ish on-air meltdown or sarcastic remarks at the expense of CBS News & Sports president Sean McManus, whose timing in making termination announcements certainly is curious. Besides, Smith has a glorious future ahead as substitute host of Face the Nation, while Rodriguez and Price will have “prominent and ongoing roles” at the network. Just, you know, not in the morning.

What is morning news, anyhow? Well, if you flipped on The Early Show, Today or Good Morning America this a.m., you were confronted with the strange tale of Clay Duke, the apparently V for Vendetta-obsessed dude who fired shots at a school board meeting in Florida. All three shows landed interviews with principal school-board members, including the woman who somehow thought hitting Duke with her purse was a good idea.

Well-produced pieces on all fronts, even if their simultaneous airings gave the lie to the idea that these three shows are being broadcast live at all times. Then again, the Duke video was available last night on most of the major news websites (and, I assume, the cable nets), so it wasn’t exactly breaking news.

Yesterday came word that John Roberts is leaving CNN’s American Morning and that the show will now “be more upbeat and faster-paced,” which goes without saying when you’ve jettisoned an automaton like Roberts. There still won’t be any vox pop segments with an audience assembled outside, however, as Today so memorably pioneered a few years ago. That was, if memory serves, one of the innovations that helped Mr. Peanut lookalike Jeff Zucker move from Today exec producer to NBC Entertainment president, where his lasting legacy will be the whole Leno/O’Brien kerfuffle.

The Early Show moves garnered a fair amount of media coverage, the first time those words have appeared next to each other within a single sentence. This is because the a.m. is the only remaining slot in the broadcast nets’ news-delivering operations that anyone watches. (Though no one will ever be watching The Early Show. Ever.) The only time anyone talks about evening news is when Katie Couric starts leaking tidbits about how she might be replacing Larry King or even—gasp!—returning to Today.

And shuffling bodies around is the only real change that ever occurs at the morning programs. Otherwise it goes like this: They give you the big headlines at the open, screw around with smiling and saying hello and demonstrating how much they love each other/find each other hilarious for a few minutes, go into an “in-depth” interview or story about one of those teases, and then—maybe—throw it to the news desk for “the rest of the day’s headlines,” which usually includes pitching to some financial reporter for a 15-second update on the overseas markets. Then back to the news anchor, to pitch to the show anchors, to pitch to the weatherman, who gives us a look at the national weather before pitching to the local weatherman.

Outside of Dan Rather (it’s always CBS, for some reason), the only news that networks make comes in the morning. The teasing items about Couric’s possible return to Today firma take us back to the dizzying days of Bryant Gumbel’s fiefdom there, and his then-much-commented-upon leaked memo of 1989, wherein he implored NBC to “nuke” resident hambones Willard Scott and Gene Shalit. (That mission was belatedly accomplished: Scott’s been marginalized for years and Shalit recently retired; that deafening silence you hear is the cultural indifference to the man who once claimed “GoodFellas is good—and plenty!”)

But who cares if Couric comes back or not? After all, Gumbel eventually popped up on The Early Show to no visible effect. There was silence when first Jane Pauley, then Gumbel, departed Today and Charlie Gibson and Diane Sawyer exited GMA. Instead, both shows have prospered, with erstwhile “too serious for morning TV” George Stephanopoulos effortlessly gliding into the anchor’s chair and summarily sinking all those “GM-Gay” jokes when Robin Roberts and Sam Champion were still clucking in their coffee with Chris Cuomo.

And so on they plod, until CBS decides to gamble on letting Lindsay Lohan or The Situation (or someone like Clay Duke) host The Early Show. Then we’ll have something to talk about.