Sympathy for the Punchline 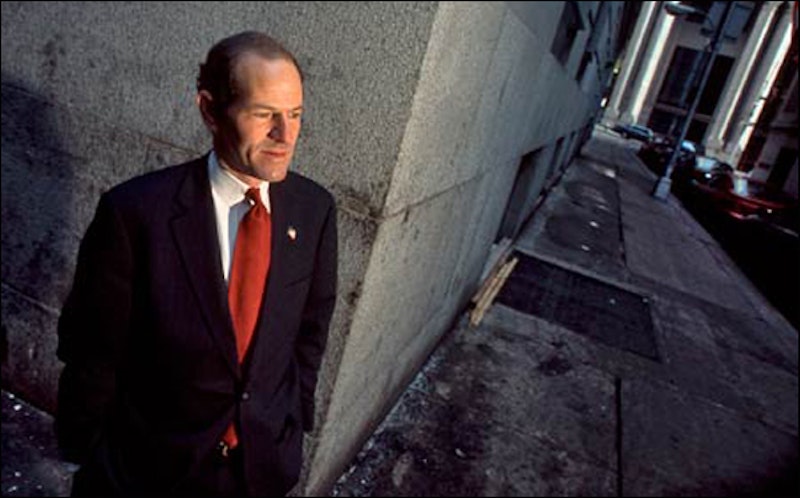 Big cats and polar bears turn up on screen in Client 9: The Rise and Fall of Eliot Spitzer, Alex Gibney’s curious take on the former New York governor. Sharks, too. The beasts are an amusing fixation for a documentary otherwise devoted to the former madams, New York politicos, PIs and ready-made Wall Street villains who fill out the front lines of Gibney’s Spitzer storyline—a self-proclaimed gesture toward some bestial duality at the center of the scandal.

Stir in some obligatory allusions to Greek myth and we begin to get a sense of how epic and elemental Gibney’s movie frames this story to be. And fair enough, to a degree: Spitzer’s crushing public downfall in 2008 amid revelations that he was a patron of call girls became an instant fixture of political lore. The movie theorizes up a storm about what might have happened, and Gibney scores impressive access to a host of key figures: former New York State Sen. Joseph Bruno (often filmed as he beats a punching bag), Spitzer’s foes from finance, just about every political reporter he can find.

Gibney interviewed Spitzer in five separate sessions, but the only time he really gets his subject going is talking about the public battles the former governor slugged out with banks, financiers and political rivals. Spitzer laughs as Gibney recounts stories of his aggression in office, but it’s audibly awkward to watch him squirm out his words when the topic turns to his misdeeds.

It’s just the opposite for the movie. Client 9 takes a sober tone as it recounts Spitzer’s struggles against Wall Street—the segments recall the clear-eyed contempt Gibney previously brought to his Enron documentary The Smartest Guys in the Room—but there is strange mischief in the air when the subject turns to Spitzer’s late-night dalliances. “What kind of guy fucks with his socks on?” one operative asks, only half-kidding. There are other recollections of illicit encounters with Spitzer, and even a slow pan over the full-frontal shots Ashley Dupré took for Playboy last spring.

In fact, the film is rather specific about its distaste for Dupré—Spitzer himself evidently preferred a young woman who went on to become a New York day trader (and who, oddly, is played here by a hired actress based on private interviews). Then there are all those big animals, which creep onto the screen now and then and help underscore how bizarre and uneven Gibney’s movie can be.

With its pivoting interests in a political conspiracy against Spitzer and the details of the scandal that brought him down, the movie is at once angry and serious, lurid and glib. In the end it suggests, somewhat convincingly, that the investigation of Spitzer was less about hookers than the barons and rivals who wanted to see a star taken down. So why then does the film so often seem immersed in the tabloid frenzy that engulfed the entire scandal? What, exactly, is the point?

The answer may be obvious. Steeped in classical technique, Gibney sticks to traditional montages of sit-down interviews, newspaper spreads and archival video, which gives his investigative work some reach punch. But even he can’t help but have fun with the more flamboyant aspects of the scandal, an impulse that is both understandable and somewhat disreputable. Thus Client 9 is often two movies, clearly so even from its opening sequence, a 2006 campaign commercial for Spitzer’s gubernatorial campaign. It’s an indelible, dual image—a pointed, jaded wink at his personal failure but also somehow a sympathetic reminder of the ambition he brought to office. Spitzer the conquered hero, Spitzer the punchline. Take your pick.