Read parts one and two. 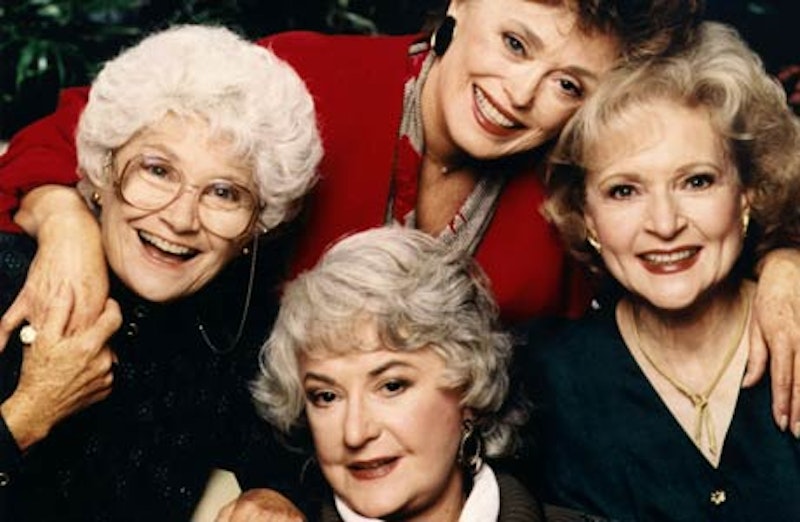 1. After The Golden Palace was euthanized—the best said about that lopsided, misbegotten abomination, the better—the character of Sophia (Estelle Getty) surfaced as a regular on Empty Nest, which was, itself, a Golden Girls spin-off.

2. Golden Girls screenwriters rarely fumbled or dropped the ball tonally, but every once in a while a royal fuck-up slipped through the cracks. Take, for example, Season 4 classic “Yes, We Have No Havanas.” Blanche (Rue McClanahan) is dating an older man, but she hasn’t yet disclosed that fact to her roommates. When the suitor, Fidel Santiago, arrives, Rose (Betty White) answers the door, and the following exchange occurs:

Rose: Oh, hello. We thought you were Blanche’s date, but you’re way too old.

Now, that’s quintessential, foot-in-mouth, how-do-you-do Rose, along the same lines as her greeting to Blanche’s overweight daughter in a different episode:

Dorothy: You'll have to excuse my mother.

Rose: It's just that we didn't expect you to be this fat.

But once Rose realizes her mistake, she utters something so deeply uncharacteristic of her that, for me, stops the episode dead in its tracks:

Rose: Please forgive me! It wasn’t my fault—my cousins have been marrying each other for generations. I’m sorry.

A hilarious, knee-slapping quip, but it would’ve made much more sense had Dorothy (Bea Arthur) delivered it. The writers infused Rose’s persona with a certain edge as the years passed, certainly, but this one was beyond the pale. Here’s an exchange from another episode that never fails to startle; the girls are cleaning up the house after hosting a meeting of their unauthorized Elvis Presley fan club:

Blanche: You know what I hate doing most after a party?

Rose: Trying to find your underwear in the big pile?

3. Like probably every television show that spans nearly a decade, The Golden Girls was full of continuity hiccups. More amazing to me is the fact that somebody out there took time to detail most of them on Wikipedia.

4. Out of laziness, hubris, or some sneering combination of the two, the producers routinely fell back upon what I like to call “flashback episodes,” which might be thought of as selective greatest-hits albums. Something significant would be on the verge of happening—Blanche selling her home to a Japanese buyer, Sophia leaving to move in with her son—and this something would set in motion a series of headlong, context-amputation trips down memory lane, which was probably easier and cheaper than conceiving and filming a new episode. “Flashback episodes” bear no resemblance to the season-so-far recaps Grey’s Anatomy springs on us now and again, where half a season’s worth of plot are boiled down, in a Girl Talk sense, into an hour-long episode to get viewers whose DVD-Rs are on the fritz up to speed on who’s broken up with who and who has fallen off of the wagon. The former was boorish self-mythology hand-jobbing; the latter a sort of public service.

5. Geographically speaking, Golden Girls has a gaping deficit; its regulars aren’t fully representational in a national sense. Sharp-tongued, no-nonsense, and prone to embellished Sicilian flashbacks, Sophia is a stand-in for the Brooklyn beat resilience and the post-immigration experience. College-educated, modern-thinking, assertive Dorothy? Consider her a card-carrying member of the Eastern liberal elite. Gullible, family-oriented, farm-obsessed, and a consummate lover of animals, Rose for all intents and purposes is America‘s well-meaning, hard-working bread-basket, while Blanche, obviously, symbolizes the dramatically drawled South. What Golden Girls ultimately lacked, almost bafflingly, was a direct link to the frontier American West. One might argue, reasonably, that the West was present at least some of the time in the personage of Stan Zbornak (Herb Edelman), whose get-rich quick schemes and whirlwind marriages and greed and general leech-like, opportunistic neediness is evocative of and colors the ways that many of us still prefer to think about California.