Why Are There No Top Models From America’s Next Top Model? 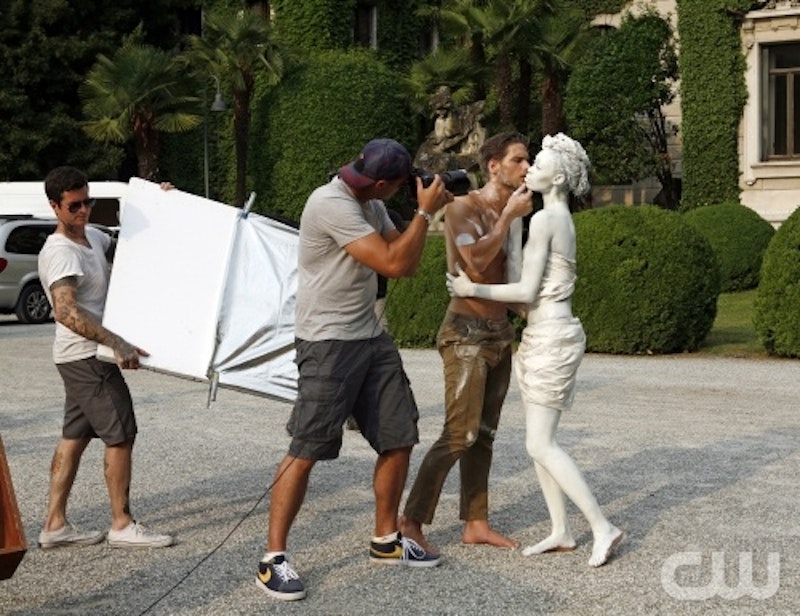 This week on America’s Next Top Model, Chris — the hilarious but unfortunately commercial looking girl with the huge, receding forehead — got sent home. Congrats to Chris for making it to the Final Five. Andre Leon Talley, ever over-the-top and draped in sequins, was all, “This girl could be the next Wanda Sykes, but model she is not!”

Preach, ALT! But what I’m wondering is: when have any of the girls on ANTM been models, and why have none of them made it in fashion?

Most of us think models are “discovered.” I grew up in a house full of girls desperate to become world famous fashion models—not doctors or lawyers or anything too easy like that. They thought the only way to do it was to step into a ton of weave, cake on a pound of make up, go to the mall, and wait until somebody “discovered” them.

Madison: “Well, ya’ll ‘bout to be waiting a long ass time, then!”

Shows like ANTM are part of the American “anybody can be a staahhh!” folklore, and ANTM in particular is based on international modeling contests sponsored by the top modeling agencies in the world. The Ford Supermodel of the World contest, which kicked off in 1980, gave us the fabulously likable Chanel Iman (though she actually came in third place). Praise be the Lord that Elite Mode Look gave birth to Gisele Bündchen and Rianne ten Haken, a model you don’t know by name but who is fierce as hell and who basically lives in Vogue Italia. Daria Werbowy—my personal favorite—won a model contest in Canada when she was 14.

So if Chanel, Daria, and Gisele—three of the hottest bitches on the catwalk—were all captured and quarantined from the average-looking populace through modeling contests, why can’t the girls of ANTM get it together?

First, I’m willing to bet few people can name a top modeling agency, let alone know about the modeling contests they sponsor. Second, nobody in fashion wants anything to do with a reality television star. But the real tea is that a model’s career is not about winning $100,000, getting a contract at The World’s Most Fabulous Modeling Agency, or appearing in a magazine/commercial nobody will remember. You could be the hottest piece of ass over at IMG or WOMEN, but if nobody books you, you’re kind of like a nobody.

Becoming a supermodel is all about who you’ve worked with, the shows and ads you’ve been in, and the photographers who’ve shot you. It’s the kind of thing where you’re only desirable if you’re desirable, which is pretty much the way it goes in the art world, too. If you’re a painter and you went to Yale or Columbia for the MFA, and Charles Saatchi comes and buys up your thesis show—BOOM!—now everybody in the art world wants a piece. And in fashion, if you’re featured in an editorial by Steven Meisel, or if you open for Balenciaga, or if you are on the covers of 10 magazines at the same time, you become a brand and you’re exciting and everybody wants a piece of you. No model has ever become “super” without being a muse first. Iman was a muse to Yves Saint Laurent (the man), Daria Werbowy for Balmain, Yves Saint Laurent (the house), and you’ve seen her on TV in those H&M commercials. Freja Beha and Jon K. are both muses to Tom Ford, and Karl Lagerfeld likes Freja a whole lot. Once Uncle Karl is into you, you’re pretty much all set.

So it’s interesting that in the current cycle of ANTM, the winner gets all the usual accolades plus a spread in Vogue Italia and a cover of Beauty in Vogue. That’s huge! Because Tyra finally realized that none of her girls were making it, that they were basically the laughing stock of the fashion industry. Italian Vogue is pretty much the bible of high fashion—you can’t really get any higher than that. The editorials are always edgy, extremely fierce, artfully conceived, and shot by the best photographers in the game.

Maybe this time one of Tyra’s girls (Ann!) will stick.