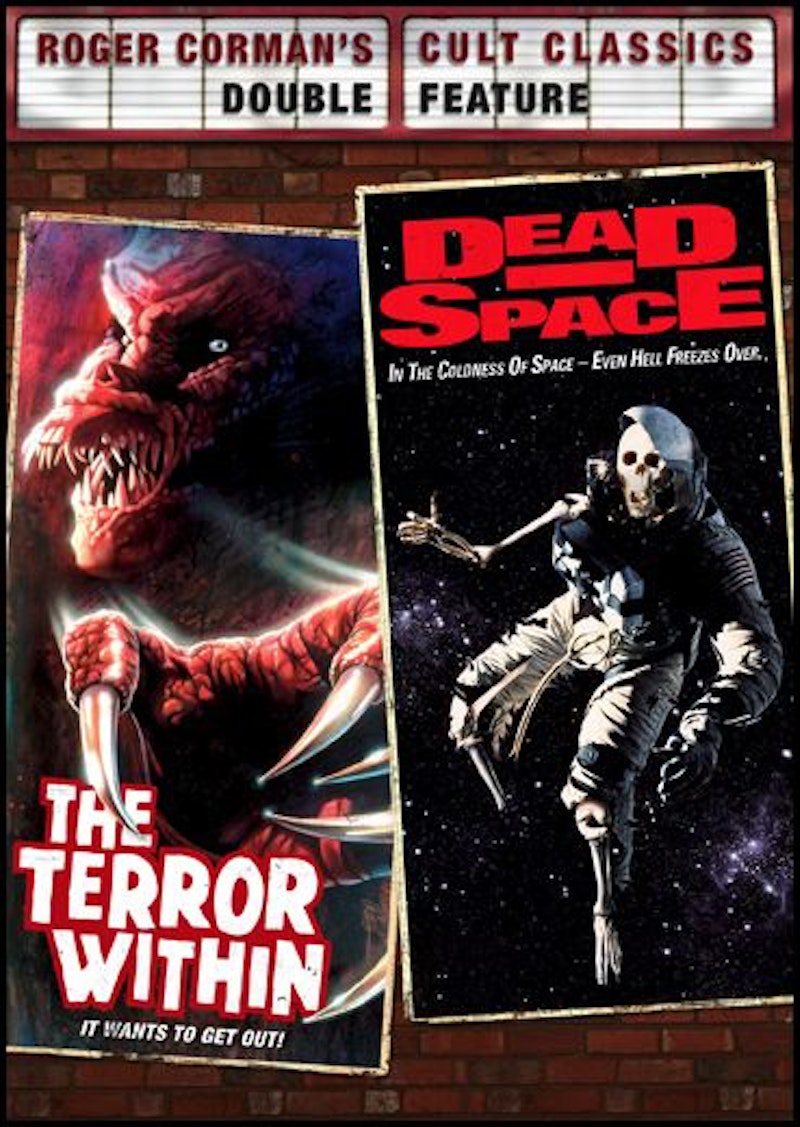 Twisted, fetid, abnormalities, that feast upon the corpse of that which birthed them! A fecund, slithering, indestructible horde which lives only to feed, breed, and spew foul fluid upon all they survey!

I speak, of course, of rip-off Alien exploitation films. Two of this foul mutant ilk—The Terror Within (1989) and Dead Space (1991)—have recently been re-released on a single DVD by Shout Factory in their ambitious Robert Corman’s Cult Classics reissue project.

Truthfully, calling either of these films “classics” of any sort, cult or otherwise, is a bit of a stretch—along the lines of saying that Kane in that beloved Alien scene was suffering from a bit of indigestion. Rather, these are, to put it simply, bad movies—ridden with tired dialogue, indifferent acting and special effects of the, “Hey, I bet that suit is really uncomfortable on that guy” variety. The Terror Within’s post-apocalyptic-everybody’s-died-and-the-plague-has-birthed-mutants plot is relatively coherent, and its hideous birth scene packs a certain punch (though it wimps out and refrains from having the evil fetus bite off the hand of the abortion doctor à la The Thing.) Dead Space, on the other hand, has some actual moments of wit; Marc Singer as Commander Kreiger is possessed of a rudimentary charisma, and his banter with his robot second in command attains the fusty acerbity of a decent sitcom (“Divert power to the lasers!” “That wouldn’t be my first choice, commander.”) But these pluses are easily outweighed by the fact that in The Terror Within our hero David (Andrew Stevens) has the proportional emotional expressiveness of a radioactively smug carrot, while Dead Space makes the unfortunate error of believing that suspense will be increased by having characters wander more or less aimlessly about random sets while occasionally being menaced by large rubber puppets.

Despite their unabashed lousiness, though, watching these films wasn’t especially unpleasant. Even by exploitation standards, these films are resolutely unpretentious—nobody but nobody here is trying to say anything. The movies have some pretty people who inevitably and gratuitously strips down for our edification. They have some campy moments of fun: George Kennedy, playing the crusty team leader/grandpa, enters the film with a lingering shot on his crotch—then spends the rest of the movie in a jowly funk, as if wondering when he and his patriarchal bits are going to finally get slaughtered so he can get off the damn set, already. And, most importantly, they have some of the annoying characters die satisfyingly horrible deaths, doled out to, among others, the earnest girlfriend, the cowardly boyfriend, the patriarchal dipshit, the scientist obsessed with his work, the boneheaded grease-monkey, the scolding hottie, and, last but not least, to the only black performer in either film (John Lafayette) who is killed quickly and humiliatingly, just to remind you that they were not above that sort of thing in 1989.

But what’s most notable about these movies is not who gets killed, but who doesn’t. Because the greatest thing about Alien, the thing that gave it its real bite (as it were) wasn’t the gruesome beauty of its special effects or the brutal claustrophobia of its mise en scene… Or, okay, it was those things, I’ll admit. But it was also its twisted ruthlessness. Alien looked like a sci-fi film, but it walked like a slasher. Everybody in that movie was ruthlessly humiliated—especially the brave het heroes, who ended up raped, impregnated, violated, and dead, dead. The only one who gets out alive was that uber-final girl, Ripley, who was hard-assed and butch as hell, and when she left she didn’t need no stinking man, because (as I mentioned) all the men were dead.

The Terror Within and Dead Space, on the other hand, are a lot more conventional. This is a little bewildering. Obviously, neither of these films was ever going to beat Alien on effects or acting or writing. But you’d think they might make a stab for increased tastelessness. I mean, this is exploitation, right? Why not have your alien exploding out of someone’s anus, or kill your hero off first thing, or, you know, just kill everybody, hero and heroine alike, and end with scenes of monster fetuses geysering out of everybody’s flesh? What’s to stop you? Like I said, this is exploitation—the good guys don’t need to win.

But no. In both of these films, there’s a guy who’s heroic and has a gun and there’s a girl who is heroic and helps him out, and they survive and go and march off to collegial harmony (The Terror Within) or to standard romantic bliss (Dead Space) The Terror Within is willing to have some rape, but alas the mutants only impregnate females, which after Alien, seems almost laughably unambitious of them. The films don’t even have sufficient courage to get rid of the dog or the robot, both of whom are crippled and then miraculously healed because otherwise, presumably, it would just be too mean.

I expect exploitation films to be perverted and decadent. Here, though the second seems to have prevented the first. Terror Within and Dead Space are bastard, inbred, copies of the real thing—and in this context, that means they give the cowboy hero a girl and a sidekick rather than having their way with him and desecrating his corpse. Instead of an alien erupting from a humans’ stomach, here you’ve got a well-mannered actuary pulling himself out of the alien. Which has some amusement value, but not really enough to make this twofer worthwhile.