Orange Is the New Black Puts Netflix On Top

And makes up for the last three seasons of Weeds. 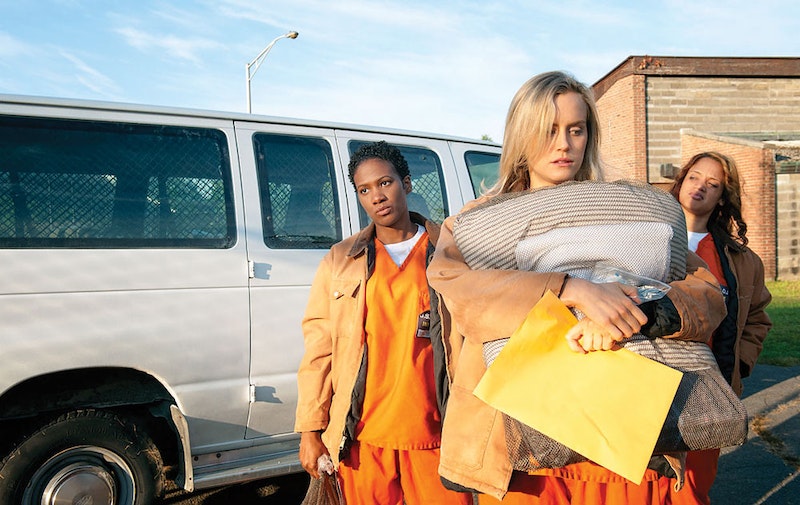 Netflix made history Thursday with a record 14 Emmy nominations for its online-only original programming: nine for its big-budget political thriller House of Cards—including a nod for Outstanding Drama Series—and five for its re-boot of the cult comedy Arrested Development. With company stock already up 175 percent since the start of the year, investors are eagerly awaiting an earnings report due out Monday. All of this while Netflix's new show, Orange Is the New Black, has been wildly praised as one of the best new shows of the year.

Orange Is the New Black was created by Jenji Kohan (Weeds), and adapted from the best-selling memoir by Piper Kerman. The show stars Taylor Schilling—a relative unknown who you may recognize from NBC's quickly-canceled medical drama Mercy—as Piper Chapman, a recently engaged New York yuppie with a budding floral soap business who's sent to prison for her loose involvement with an international drug cartel 10 years earlier; she'd helped her post-college lesbian girlfriend smuggle $50,000 cash out of the country—once, she says. "What's the statute of limitations on that?" her prison counselor, Sam Healy, asks her when she first arrives. "Twelve years," Chapman says.

By saying just about all the wrong things to all the wrong inmates, Chapman quickly learns the ins and outs of the prison. In an early episode she insults the food in front of Red, a stern Russian woman who runs the kitchen, and is promptly cut off from all dining hall meals until she figures out a way to make amends. Red is played by an almost unrecognizable Kate Mulgrew (Capt. Janeway from Star Trek: Voyager), and is one of the best supporting actors in a show with a whole lot of really great supporting actors. This is the one thing that OItNB really has going for it: wonderful acting and well-written characters. There are exceptions, of course. Healy, for example, who in early episodes is practical and understanding—one of the few really likable characters on the show—takes a completely unexpected mid-season turn after Chapman stops cooperating with him.

And while this is a prison show (maybe even the best prison show?), and Kohan has a penchant for scenes of shocking violence, "this is not Oz," as Healy tells Chapman in episode one. Well, it turns out it is, but it's also Eat Pray Love—it's no coincidence, I think, that EPL is mentioned in Taystee's hair-styling scene. There's a lot of self-realization; a lot of crying and hugging and acceptance. About halfway through the season you start wondering if you're supposed to be happy that Chapman went to prison. Think of the mediocre, bourgeois WASP life she was mired in. She nearly married Jason Biggs for God's sake. If only we could all go to jail and find ourselves. But just as this sort of bland naïveté is about to settle in and ruin everything, the last three episodes hit—heartbreaking and powerful episodes unlike anything Kohan pulled off with Weeds—and all doubts about this show's brilliance are gone.