Contestants live on stage for upwards of 11 days. 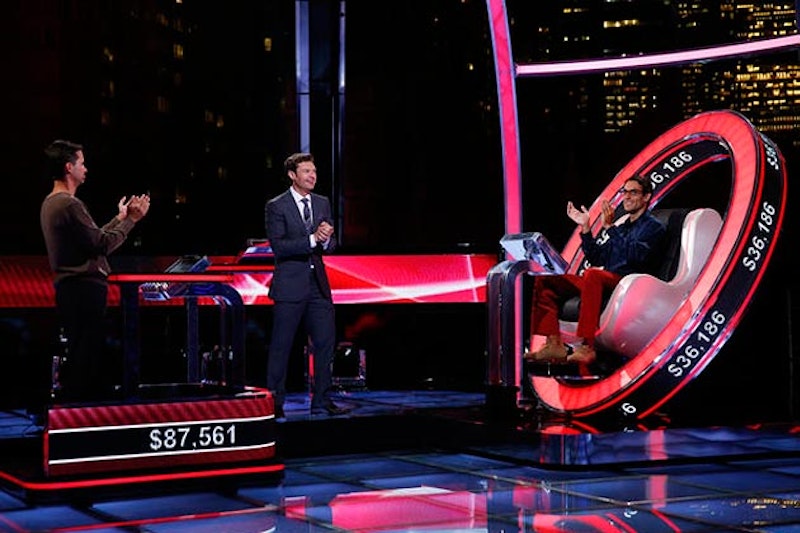 NBC's troubles continue. Ahead of its dismal fall lineup, network execs gave the go-ahead for a game show extravaganza, Million Second Quiz, ratings for which have tanked since its debut last Monday. The Hollywood Reporter said it was "confusing and boring," the AV Club rated it an F, and New York Magazine's Joe Adalian tweeted out "Million Dollar Mistake." So, of course, I just had to check it out.

Things I understand about Million Second Quiz: Ryan Seacrest hosts the show, which is set in a newly-built hourglass-shaped dome in midtown Manhattan. Contestants answer trivia questions 24-hours-a-day for one million seconds (which—fun trivia fact—equals about 11-and-a-half days). There are two contestants squaring off at any given time: one of them sits in the "Money Chair," earning $10 a second (even during commercial breaks and Seacrest's boring interviews), while the other one is trying desperately to win his or her way into the Money Chair. Those in the Money Chair must complete three rounds to make it on to "Winners' Row," which is more of a Winners' Hostel since the Top 4 contestants at any given time are required to live on set—there are beds and everything, sponsored by Subway—until they're either knocked off or the million second clock runs out. Read that again to make sure you got it: There are contestants living on stage for upwards of 11 days.

The three rounds for those in the Money Chair are as follows: "Challenger," wherein they play some poor schlub who's been standing in line out back of the studio for the last 48 hours; "Line Jumper," featuring high scorers from the MSQ iPhone app; and "Winner's Defense," played against one of the exhausted, shit-stained Top 4. Trivia rounds last about 3-400 seconds, and questions are worth more as those seconds tick down. You have five seconds to answer. Also, at any given point—Hey! Are you following me here?—a contestant can "double" a question, which makes that question worth double the points and forces the other contestant to either answer or "double back," which, yes, doubles the points again. Double back is where it stops though. I'll leave it to you to figure out the obvious risks and rewards here.

Things I don't understand at all about Million Second Quiz:

2) Why would you ever want to get on this show early on? It's far more advantageous, in terms of just general well-rested trivia readiness, to get on during the very last day, when you don't have to figure out how to eat, sleep and shit on a live game show set. During one of the reruns I was watching last night (Day 4, maybe?) one of the Winners' Row contestants—forced into a Winner's Defense round which he ended up losing—admitted he'd only slept about five hours since he'd made it to Winners' Row nearly 40 hours earlier. Of course that idiot wasn't going to win: it's Day 4 and he's probably already on the brink of sleep psychosis.

3) For God's sake, if you're down more than, like, 10 or 15 points with less than 100 seconds to go (which equals about four questions once Seacrest gets through all his slow-reading bullshit), just double every question unless it's just the easiest thing you've ever seen. You've got absolutely zero chance of winning if you just answer, answer, answer. All you can do is double, hope they guess wrong, or, if they double back, you've got a one-in-four chance of guessing right and winning a whole bunch of points. There is no other strategy that makes sense.

4) Who’s making money on this show? I get that the four contestants in Winners' Row at the end of the million seconds get to cash in their winnings and then compete for $2 million, but what about the guy who just sits in the Money Chair for one round and makes, like, $3000? Does he actually make anything at all?

5) Those in Winners' Row can play along with as much of the live game as they want (on MSQ-provided iPads). When a Winner's Defense round comes up, the Winners' Row contestant with the most mock points is automatically chosen. That contestant can then either play or pass to someone else. Why they would ever play and risk elimination is beyond me but I've seen it happen.