Sons of Anarchy's School Shooting: Kurt Sutter Is in Too Deep 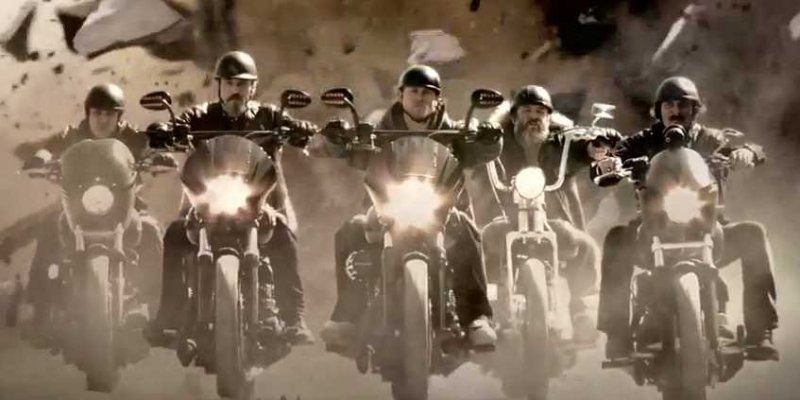 This past April, Glee outraged fans across the country with its "shocking" school shooting episode. "Chills. Sob. Hiccup. Repeat," wrote E! TV columnist Kristin Dos Santos. "Shooting Star" was only the second—and, God willing, the last—Glee episode I've ever watched; and while it's true that half-way through the episode, with the Glee Club assembled in the choir room, a couple of far-off gunshots are heard, "Shooting Star" isn't so much a school shooting episode as it is a crying teenager episode—I guess it can't all be song and dance routines, you have to at least try to work some "genuine" emotion in there.

Dos Santos doesn't write about Sons of Anarchy, so God only knows what she'd think of the school-shooting scene in the final minutes of the show's recent season six premiere, "Straw," but plenty of others have already said enough is enough. Here's Jason Lynch, writing for The Daily Beast:

Rooting for SAMCRO to get the better of other gang bangers, white supremacists, drug dealers, and other assorted lowlifes is one thing (sure, our guys are bad, but these other people are so much worse!) but we’re now being asked to cheer for a group that not only helped enable a school shooting to happen, but also has zero guilt over its involvement in the deaths of multiple children. That is something I refuse to do.

No, we don't actually see the shooting, but did we really need the blood splatter on the window? Did we really need the school notebook scrawled with ramblings and disturbed drawings, like this 11-year-old kid is the Red Dragon or something? In an interview with Entertainment Weekly, Sutter promises that the school-shooting scene is not just trivial sensationalism. "It’s not being done arbitrarily. It ultimately becomes the final straw in their relationship with the gun business and the domino that takes us to a fairly tragic and epic conclusion. It impacts all their relationships..." Fair enough, though all the reviews I've read—by critics who, unlike me, are fortunate enough to have seen the next two episodes—suggest that SoA falls short on the follow-through. As Alan Sepinwall put it:

The school shooting caught my attention not only because it’s such a gut-wrenching event... but because it seemed like a real opportunity for Sutter to shake up the show and its characters, and rekindle my interest in the end of the series. The next two episodes suggest that it’s just being used in service of more of the same; if that’s true, it’s both a waste and unpleasant. And even if Sutter intends much more emotional fallout from this down the road, he definitely fumbles the immediate aftermath, as there’s virtually no sense that life in the small town of Charming has been disrupted by an event that would be national news.

Still, Sutter insists: "We don’t do political stories on this show. This isn’t about me making a political or social statement about gun violence and blah, blah, blah."

Never mind that that's exactly what he's doing: one of SAMCRO's illegal KG-9s is used in a school shooting, it'll be the end of everything for SAMCRO, and every YouTube comment on the scene by avid fans understands it that way. A typical comment: "I think this is GENIUS! It showed the reality of the repercussions that real gun runners like the sons face and the problems that comes with it. People are too sensitive and writing this was the right thing to do!" So how is that not a political statement? Sutter again:

My point of view—and I still believe this—is that one party is not responsible for those things. Meaning, in my opinion, it is the gun laws, it is the level of illegal guns that people can buy on the street, it is the issues we have with mental health, it is our education system, it is the responsibility and burden on the family. What we weave in organically, I think, is the sense that there are a myriad of circumstances that create this perfect storm, and ultimately, law enforcement needs to hang the responsibility on somebody.

That's all perfectly sensible and well-thought-out, but Sutter has also said that SoA is nothing more than an "adrenalized soap opera" and "bloody pulp fiction," and after season four's tremendous letdown, I don't have a lot of faith that Sutter can deliver when it comes to emotionally rich storytelling.