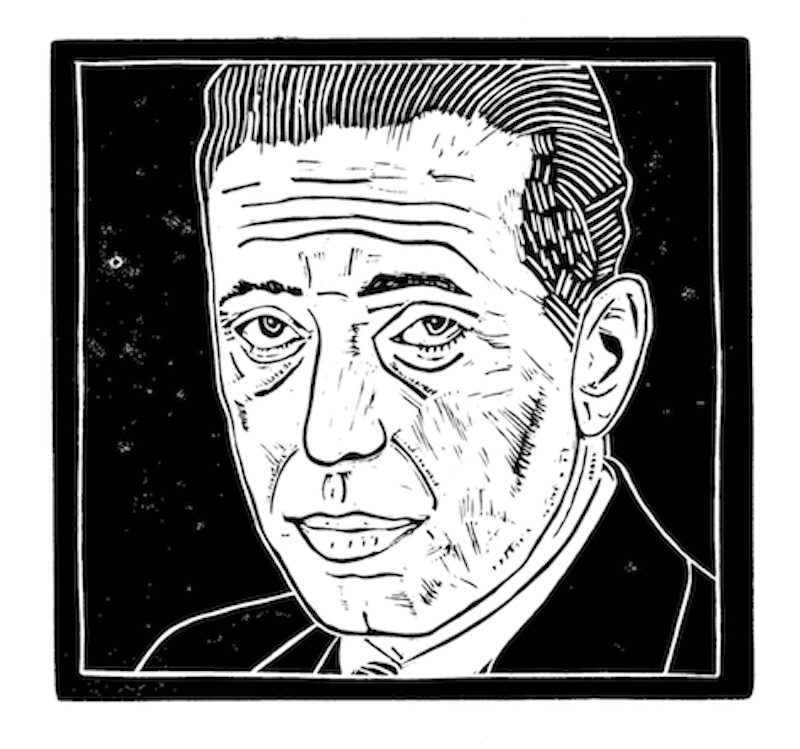 Humphrey Bogart's characters smoked, drank, fought and almost always got the girl. His film image was that of a wounded, stoic, cynical loner with his own idealistic moral code. Born on Christmas Day in 1899, his father was a renowned heart surgeon and his mother Maud a famous commercial artist. An illustration of Bogart as a baby was used in an ad campaign for baby food making him a national sensation. Though he grew up in affluence, Bogart despised pretension, snobs and phonies.

Bogart was expelled from prep school for throwing the headmaster into a lake. He enlisted in the US Navy at age 17 to fight in World War I. While escorting a handcuffed prisoner, the captive smashed Bogart in the face and attempted unsuccessfully to flee. Bogart acquired a scar above his lip that became the defining feature of his tough guy persona.

Bogart made his stage debut in 1921, and struggled in New York theater for 10 years. In 1929, he lost his savings in the stock market crash, and was reduced to making money by playing chess for 50 cents a game in local bars and coffee houses. His first big stage role came in 1934 playing escaped murderer Duke Mantee in The Petrified Forest. He reprised the role for the film adaptation. Between 1936-1940, Bogart made an average of six movies a year for Warner Brothers, most of them mediocre. These were his B-Movie years and Bogart was cast primarily as a gangster.

During this period, he entered his third marriage, to actress Mayo Methot. Methot was a heavy drinker and paranoid that Bogart was cheating on her. They fought constantly and the press dubbed them "the battling Bogarts." Methot set their house on fire, stabbed Bogart with a knife and slashed her wrists on several occasions. Bogart bought a yacht he called “Sluggy” (named after Methot) and began finding refuge at sea.

In 1941, Bogart starred in High Sierra, a film written by John Huston. When Huston became a film director he cast Bogart as Detective Sam Spade in The Maltese Falcon. The film was a hit and Bogart was able to shed his gangster image. Bogart's watershed role came in 1942 playing Rick Blaine in Casablanca. (The role was initially offered to Ronald Reagan.) Bogart's teaming with Ingrid Bergman yielded the greatest romantic pairing in movie history. Off set, the two barely spoke. In 1944, Bogart met Lauren Bacall while filming To Have And Have Not. Bogart was 44, Bacall 19. They reunited for The Big Sleep and their scenes together crackled with sexual tension. Bogart divorced Methot and married Bacall. They had two children, making Bogart a father at 49.

Bogart bought a 55-foot sailing yacht from actor Dick Powell he named Santana. He was an accomplished helmsman and he spent up to 40 weekends a year at sea. On most voyages, he traveled stag. He told Frank Sinatra, “The trouble with having dames on board is you can’t pee over the side.”

Throughout his career, Bogart became known for classic dialogue in his films, including “Here’s looking at you, kid,” “I think this is the beginning of a beautiful friendship,” “We’ll always have Paris” and “Of all the gin joints, in all the towns, in all the world, she walks into mine.” In The Caine Mutiny, Bogart utters a line emblematic of his own life outlook: “There are four ways of doing things: the right way, the wrong way, the Navy way and my way.”

In 1951, Bogart won a Best Actor Academy Award for The African Queen. He became a vocal protester against Sen. Joseph McCarthy and the Hollywood Blacklist. Bogart was a heavy smoker and drinker, and in 1956 was diagnosed with esophageal cancer. He returned home and remained bedridden, losing so much weight he was transported up and down the stairs in a dumb waiter. In January 1957, Bogart was visited by his close friends Spencer Tracy and Katharine Hepburn. Bogart looked up at Tracy and said, “Goodbye, Spence” (he’d always said “goodnight” in the past). Tracy walked downstairs and told Hepburn, “Bogie’s going to die.”

Bogart died the next morning, at 57. Because he was cremated, a glass-enclosed model of his beloved yacht Santana stood in place of his casket at the funeral. John Huston eulogized Bogart with the words, "In each of the fountains at Versailles there is a pike which keeps all the carp active, otherwise they would grow fat and die.  Bogie took delight in performing a similar duty in the fountains of Hollywood."