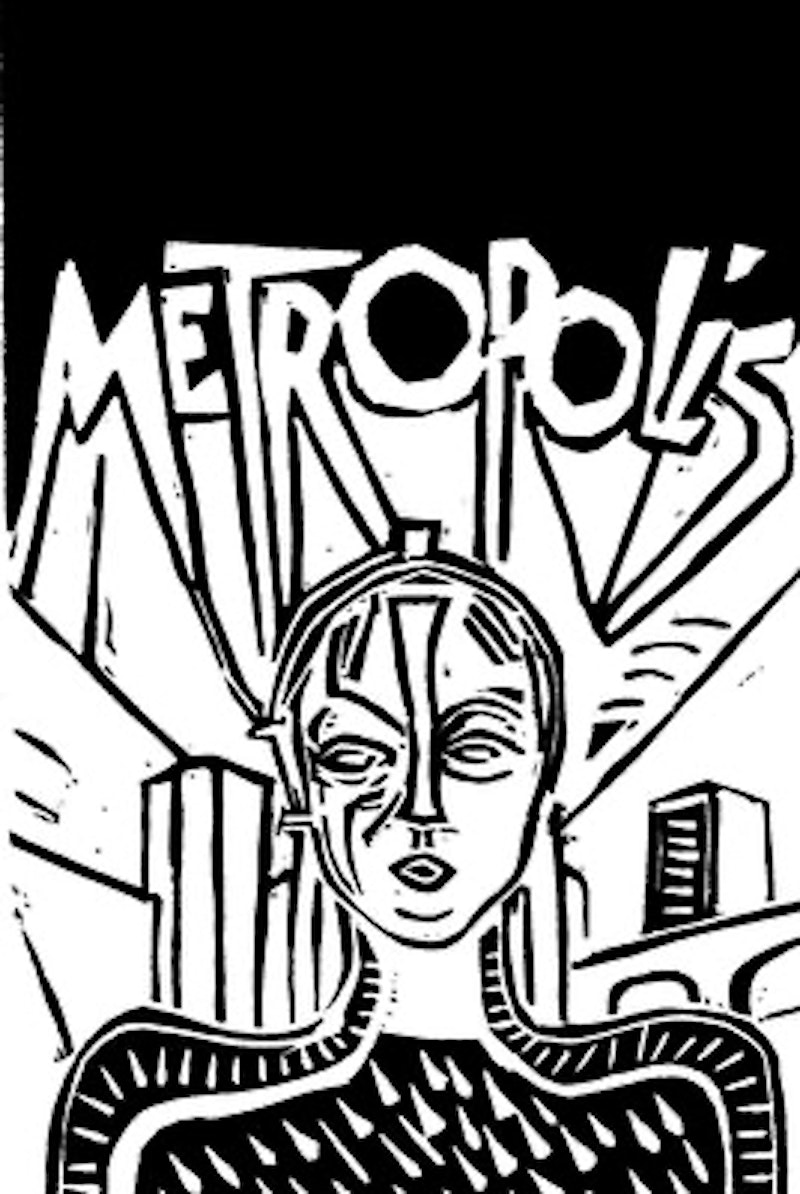 The 1927 German Expressionist film Metropolis is the most influential science fiction movie ever made. Fritz Lang’s nightmarish vision inspired Star Wars, Blade Runner and Brazil. George Lucas modeled the design of C3PO after the robot in the film. Stanley Kubrick imitated the mechanical right hand of one of the characters in Dr. Strangelove. The creators of Superman named their comic book city after the film.

Metropolis offers a futuristic view of industrialized life as an external utopia masking a vision of Hell on earth. Thriving capitalists live in a modern city above ground while workers struggle in an oppressive compound below. The story follows the son of the wealthy “city master” as he tries to mediate the gap between the haves and have-nots. Lang focuses on the inevitable class divide of modern cities between oppressed workers and the political bourgeoisie.

Lang believed that automation created drudgery rather than relieving it. He was a critic of the industrial age and his gothic art deco production and heavy Biblical symbolism likened modern cities to the Tower of Babel. Lang claimed  “The film was born from my first sight of skyscrapers in New York in 1924.” The story was also inspired by Karel Capek’s play R.U.R. about a robot revolt and by the writings of H.G. Wells.

The movie was made in Germany during the Weimar period, the republic preceding the Nazi era. Lang’s wife Thea Von Harbou wrote the screenplay. She later became a passionate member of the Nazi party causing Lang, who was Jewish, to divorce her. Adolf Hitler and Joseph Goebbels were big fans of the film, considering the story a social blueprint. After the film’s release, Goebbels met with Lang and told him he could become an honorary Aryan adding, “Mr. Lang, we decide who is Jewish and who is not.” Lang immediately left Germany for America and never returned.

Production began in 1925 and lasted more than a year. The film utilized 750 supporting actors, 26,000 male extras, 11,000 female extras, 750 children and, as written in the promotional notes, “100 Negroes and 25 Chinese.” The film’s budget reached five million Reichsmarks ($200 million today), the most expensive film made up to that point.

Metropolis gained acclaim for groundbreaking special effects. Miniature sets were filmed with stop-motion photography depicting a city with massive skyscrapers, monorails, futuristic airplanes and gridlocked freeways. The film was the first to use the Schufftan Process, a special effect where a large mirror is placed at a 45-degree angle between the camera and the miniature sets. Actors performed in front of the mirror reflecting onto the miniature set making it appear as if the actors are interacting with the environment. (The technique was later replaced by matte paintings.) The movie also utilized double-exposure images, massive Tesla coils with leaping electrical sparks and a futuristic “television phone” created by projecting a film projector through a translucent screen.

Lang was a perfectionist with a reputation for cruelty. He drove cast and crew hard with little regard for their safety. During the scene where the worker’s underground is flooded, Lang directed the child extras to hurl themselves into the water jets. Several children nearly drowned. For the scene where the female robot is burned at the stake, Lang insisted on using real flames: the dress of actress Brigitte Helm caught fire and she was nearly burned alive.

When the film was finally released, the running time was two and a half hours. German audiences were mesmerized by the special effects but critics scoffed at the sentimental truce between labor and management. (A title card in the final scene reads: “Between the mind and the hands, the heart must mediate.”) Lang was crestfallen when H.G. Wells wrote, “I have recently seen the silliest film. I do not believe it would be possible to make one sillier.”

The film flopped in Germany. Paramount acquired the US rights and cut the film to 90 minutes. The movie did decent business in the States but Lang’s original version was lost to posterity. In 1984, composer Georgio Moroder was the first to attempt a restoration. He released a color-tinted version of the film with an original soundtrack by Adam Ant, Freddie Mercury and Pat Benatar. The newly restored classic was nominated for two Razzie Awards for worst movie of the year.

Kino released a restored version of Metropolis in 2002 with the original score from composer Gottfried Huppertz. This version was well received, making the rounds of revival houses and museums. In 2008, a 16mm negative of Lang’s original version was discovered in the archives of the Museo del Cine in Buenos Aires. The print was in poor condition and several sequences could not be salvaged. The print was restored and released on Blu-Ray in 2011.