B, C, and Z movies from the past three years: Snatchers, Money Plane, and Seance. 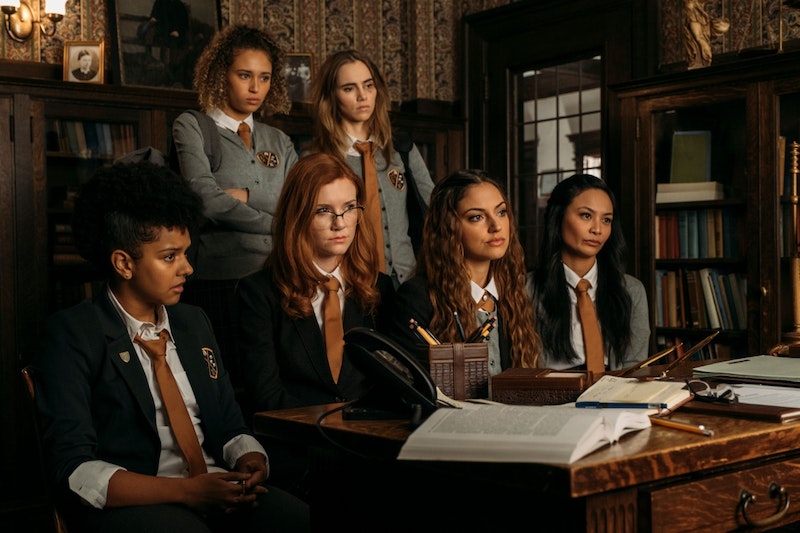 American horror still has a pulse. So does American schlock—or, if not a pulse per se, a certain appeal that can’t be denied, like Cap’n Crunch or black tar heroin. No movie theaters for most of 2020 and limited, spotty exhibition in 2021 has inadvertently made me miss a lot of the earnest, give-me-a-trophy movies that are okay with a blue-hair audience in the middle of a November afternoon but have no appeal at home alone. Catching up on contemporary horror and genre films has been breezy, if not always a blast. None of these movies were great but they’re all a lot more fun than Promising Young Woman.

Snatchers (2019): Written and directed by Stephen Cedars and Benji Kleiman (with co-writer Scott Yacyshyn), Snatchers is very gory and fairly crazy, a teen comedy in the vein of Heathers. Stars Mary Nepi and Gabrielle Elyse share the same blasé attitude about the people they accidentally kill, although the script’s sarcasm is mitigated by the high concept jumping jack quest of a premise. Nepi’s meathead boyfriend comes back from a trip to Mexico, they have sex for the first time, she gets pregnant overnight, but not with a baby, but a yellow scorpion that leaps out of her womb and decapitates the poor OBGYN that assists Nepi in her birth.

Nepi and Elyse’s relationship echoes that of Veronica (Winona Ryder) and Betty (Renée Estevez) in Heathers: the former an ascendant “popular girl,” the latter a relative nerd left by the wayside. That dynamic is dealt with directly too much, along with Nepi’s occasionally fraught relationship with her mother (played by JJ Nolan in a performance that recalls Paula Prentiss and Cecily Strong). Snatchers is basically Booksmart with monsters and murder, with all of the emotional elements of the latter undercooked compared to the impressive CGI kills. Still, it’s the best of this bunch.

Money Plane (2020): A genuine throwback to the 1960s and 1970s: a no-budget production has a star or two for a day’s work, so they put them on the poster and build the rest of the movie afterward. Who knows if Money Plane was made with a Roger Corman style setup, and who cares, because either way, it’s the modern equivalent. Here we get Kelsey Grammer, Denise Richards, and Thomas Jane (looking horrible, face puffy and smooth with bad fillers and other work done) appearing for a cumulative 12 minutes, with all of their parts shot in one location. Grammer calls on a handful of mercenary criminals to rob the “money plane”: an aircraft full of evil rich people that flies in international airspace and operates outside on jungle law.

Adam Copeland stars, and he looks three seconds away from a stroke throughout, veins popping and pupils huge as the moon. The money plane itself is pretty unimpressive, even for a movie of this level—it looks like they shot most of this at Chelsea Piers, in a hall for children’s birthday parties. You can practically hear the laser tag going on downstairs. Yet this is where the cargo Grammer wants is stored—as he screams, “I WANT MY MONEY PLANE!” It’s not exactly against type, knowing a bit about his behavior on the set of Fraiser. In the garishly decorated money plane, evil rich people play Russian roulette, get shot in the head, give gross horny looks to each other, and eventually, start spraying everyone with bullets. Money Plane is a fun enough curio, very stupid without any illusions otherwise, and gracious with its 82 minutes.

Seance (2021): Finally a creepy boarding school movie that actually feels like a creepy, possibly haunted boarding school. Few movies get the oppressive and readymade scary atmosphere of fancy prep schools, and Seance benefits from its dim, mostly empty corridors. Karim Hussain’s cinematography goes a long way, too: shot not only in anamorphic widescreen, but with near-fisheye lenses that bend and elongate characters at the edge or even right/left third of the frame, closely resembling movies shot in Technovision.

Seance starts off strong but falters as it dwells in friend group drama and suspect suspicion, instead of cool kills, which are limited compared to the more freewheeling and flamboyant Snatchers. Writer and director Simon Barrett’s film is more buttoned up and austere in comparison, but still aware and interested in coming up with new and surprising ways to kill people, for justice. It isn’t a ghost, but one of the girls who’s killing everyone, and we see Suki Waterhouse cut her throat with what look like garden shears at the end. A nice idea, but executed with so little enthusiasm, an attempt at a slow, meaningful burn that ends up feeling closer to a Zoloft commercial. Still, the dwelling itself is better than the poorly CGI’d decapitation that follows shortly thereafter. Nevertheless, if this is your milieu, 92 minutes isn’t asking the world—or spirit world—very much at all.