The American Film Institute lists it as one of the Top 10 movies ever made. 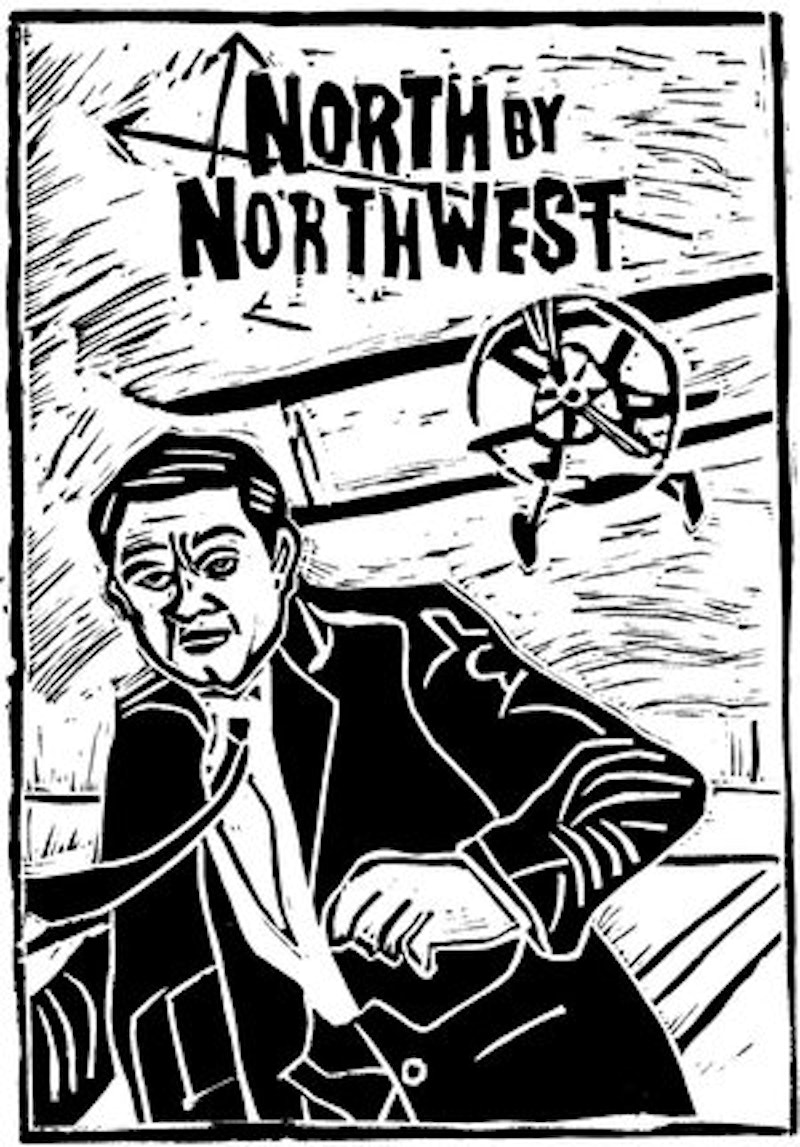 Alfred Hitchcock always wanted to make a film involving a chase scene across the presidential faces of Mount Rushmore. He had no specific idea for a plot. All he knew was he wanted the hero to hide from villains in Lincoln’s nose while suffering an uncontrollable sneezing fit. In 1957, Hitchcock teamed with screenwriter Ernest Lehman (Sweet Smell of Success) to write what would become North By Northwest. (The working title was The Man In Lincoln’s Nose.)

Hitchcock wanted the story to start with a murder at the United Nations and a plot where the protagonist is mistaken for a non-existent secret agent. Somehow, Lehman and Hitchcock combined these elements to come up with an original spy thriller. The film includes several Hitchcock signatures: an ordinary man thrust into extraordinary circumstances, POV shots forcing the audience to engage in voyeurism, a protagonist with an unresolved mother complex, a creative chase scene and a scene at a famous landmark. Cary Grant plays Roger Thornhill, an advertising executive mistaken by Communist spies as an undercover agent named George Kaplan. After being kidnapped, Grant escapes across country, falls in love with a beautiful blonde and desperately tries to figure out who George Kaplan is.

James Stewart wanted to play the lead role but Hitchcock picked Grant. The director waited until Stewart committed to the Otto Preminger film Anatomy Of A Murder before casting Grant. For the female lead, Hitchcock wanted Sophia Loren but she wasn’t available, and opted for Eva Marie Saint who’d come to prominence in On The Waterfront. Saint was from the method acting school for which Hitchcock had notorious disdain. When a method actor once asked Hitchcock, “What’s my motivation?” he responded, “Your salary.” Saint later said Hitchcock gave her only three pieces of direction. “Keep your voice low, always look directly at Cary Grant and stop moving your hands so much.”

North By Northwest was Grant’s fourth Hitchcock film, and he could be demanding. Throughout North By Northwest, Grant is almost always on the left side of screen presenting the right side of his face to the camera. He preferred the right side of his face because of a small mole on his left cheek. Grant was also a known penny-pincher. A few weeks into production, Saint was impressed by how many autographs Grant gave to star struck fans. She later learned Grant charged 15 cents per signature.

Hitchcock was denied permission to film at the United Nations building. Undeterred, he hid in the rear of a cleaning supply truck while the crew secretly filmed master shots of Grant walking into the UN.  Hitchcock was also denied permission to film at Mount Rushmore. South Dakota Sen. Karl Mundt felt portraying a murder at the location would “desecrate the monument.” MGM created a massive replica of Mount Rushmore in a Culver City soundstage. The set was so large it included 100 ponderosa pine trees.

The film’s most famous scene is a crop duster chase through a barren cornfield. The eight-minute tension-filled scene is largely silent and has no music. Grant stands beside a highway in the middle of nowhere thinking he’s about to meet George Kaplan. A stranger appears and points out a crop duster plane in the distance telling Grant, “That’s funny. He’s dusting crops where there ain’t no crops.” The resulting scene is one of the most iconic in movie history.

North By Northwest was the first spy film filled with deadpan humor. The film served as a creative template for the James Bond movies that came out a few years later. Cary Grant’s drink of choice is a Gibson—gin & dry vermouth—similar to Bond’s “shaken, not stirred” martini. The crop duster scene is blatantly copied as a helicopter chase in From Russia With Love. And the pre-Bond dialogue includes lines like “I never make love on an empty stomach.”

Renowned graphic designer Saul Bass created the film’s opening credits. Hitchcock’s signature cameo appears just after the credits. He arrives late at a bus stop and misses the bus. The modernist house owned by the villain at the peak of Mount Rushmore was based on a Frank Lloyd Wright design, although the house didn’t actually exist.

North By Northwest was nominated for five Academy Awards.  The American Film Institute lists it as one of the Top 10 movies ever made.  The film’s title is taken from Hamlet and the meaning is a classic MacGuffin (unexplained plot point) since north by northwest is not a true aviation direction.