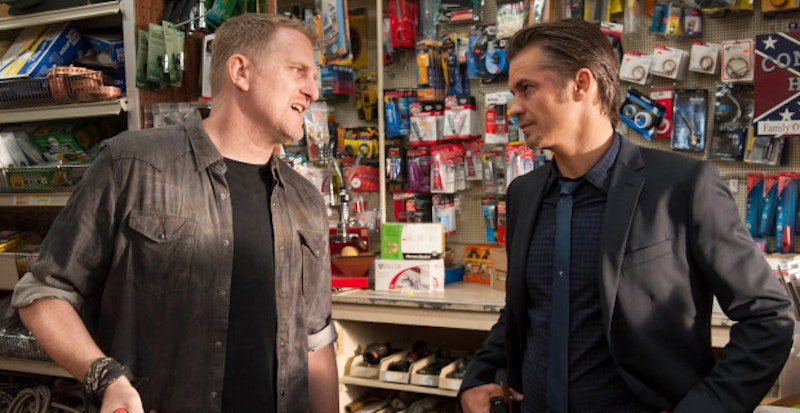 Though there are still a few episodes left in Justified's fifth season, it's fair to say the show has lost some creative spark. At this point, with only one more season to go, it's doubtful the writers will ever top season two, a powerful Faulknerian tragedy about the Bennett clan, with Emmy winning performances from Margo Martindale and Jeremy Davies. Not that the show has taken a huge dive this season—it's still a lot of fun, and Art's storyline (investigating the murder of Nicky Augustine) has been particularly good—but the show has felt unfocused for the better part of these first seven episodes, operating in mini-arcs that haven't much paid off.

Boyd has taken the majority of the screen time so far, first trying to secure Ava's release from prison—killing local judge Lee Paxton and conning his Russian mail-order bride, only to be thwarted by a vindictive prison guard—then wrapping up a heroin deal with Mr. Yoon and the Mexican cartel, despite his cousin Johnny's attempts to outbid him. But for all the unexpected twists this season, Boyd's troubles have felt more like minor hassles than anything else. Walton Goggins is basically a co-lead at this point, and I don't think anyone expects Boyd to die or be put away before the final episode. And while I've always liked Ava's character, she was so underused in the early episodes of the season I found myself not really caring whether she gets out of prison or not; now that she's in for the long-haul, I'm not looking forward to a Harlan County version of Orange Is the New Black.

Then there's the Michael Rapaport problem. Rapaport has always been one of my least favorite character actors—seriously, how do you drag down a show as bad as Boston Public?—and as Dewey Crowe's gator-wrangling Florida swamp cousin Daryl, he's downright awful. He also does the worst fake Southern accent I've ever heard. Even Dexter, in its final, unwatchable season managed to book Charlotte Rampling as a recurring guest star, so it's hard to think Justified couldn't have done better. It doesn't help that the Crowes are given no obvious motivations past money—when Daryl and brother Danny gun down Johnny's men at the end of the most recent episode, "Raw Deal," I have to think it's part of some long con, but God knows what and it's hard to figure out why Boyd doesn't just kill them right there.

As for Raylan, in episode five he finally confesses to Art that he had a part in Augustine's murder. Art takes it in stride, punching Raylan in the face and then giving him all the shit work to do around the office, but when Raylan asks for a transfer ("…anywhere that gets me out of this bullshit; sooner the better") Art decides to think it over. Raylan, having arranged Augustine's murder to protect a family that's left him, understandably wants out, but with only more season—and as Sepinwall points out, on a show where episodes can span mere hours or weeks—almost anything could happen before that last episode wraps.