In Cast a Dark Shadow (1955), Dirk Bogarde moves away from being a "matinee idol" to play a madman who knows he can’t escape himself. 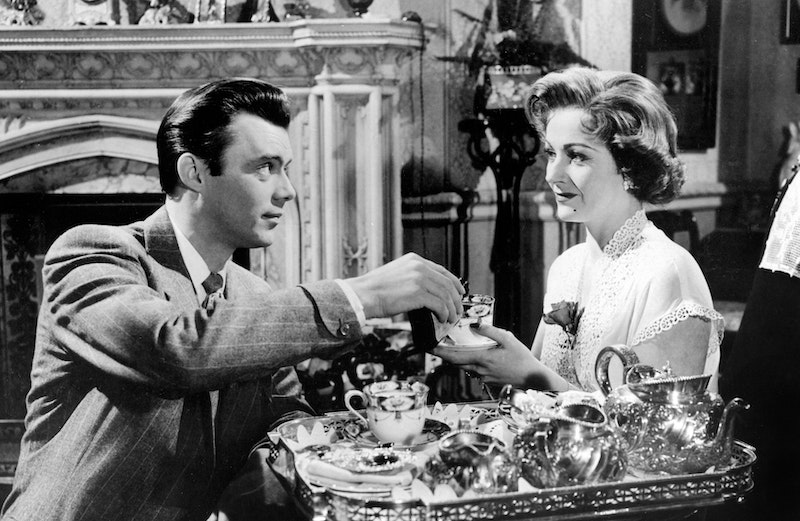 In Cast A Dark Shadow (dir. Lewis Gilbert, 1955), Dirk Bogarde moves away from the “matinee idol” look and roles, and enters another level of acting, revealing a sinister yet paradoxically, human depth. Bogarde plays Edward “Teddy” Bare, a young man who preys on wealthy, older women. As the film begins, Teddy’s already married to a much older woman, Moni (Mona Washbourne). They’re an unlikely pair—Bogarde’s charmingly attractive looks are at odds with a woman who looks like Queen Mum and has about as much excitability as a tepid cup of tea.

One feels slightly sorry for Moni because she behaves like a little school girl who has a crush, and is all too happy to learn about life from the suitor who obviously has bad intentions. Washbourne moves wonderfully from attempts at power struggle and control (she taught Teddy all the manners and proper British etiquette) to blissful acceptance of being under Teddy’s control. She doesn’t suspect him of any ill intentions despite the fact that he’s been turning her into a rambling and sleepy alcoholic, but her solicitor, Philip Mortimer (Robert Flemyng) isn’t a fool. Teddy’s aware of Mortimer’s suspicions but completely ignores them. This arrogance is part of the evil charm.

Moni wishes to change her will and wants to leave all of her fortune to “the only family” she has. Teddy misunderstands this, thinking that she’s leaving everything to her sister, when in reality, the “family” she spoke of was Teddy himself. Later that evening, Teddy kills Moni but stages it as an accident. The inquest rules Moni’s death accidental, and much to his disappointment, Teddy learns that indeed she intended to leave everything to him but never had a chance to sign the new will. Now, he only has the house, which is more of a nuisance and isn’t remotely the same as liquid cash.

Teddy moves on and finds another victim, this time a woman that’s closer to his age, Freda Jeffries (Margaret Lockwood). Like Teddy, she has lost her spouse, and is keeping her fortune close to herself. She’s not a fool like Moni, and even though she marries Teddy, Freda watches his every move. Lockwood plays Freda as a woman with money but with middle- or lower-class street smarts, which is visible in her inappropriate jokes and off the cuff statements. She’s aware of Teddy’s wealthy affectations, and in this sense, he’s somewhat unmasked, somewhat bare. He can’t hide from Freda—at least not from his class aspirations and imitations. Teddy realizes faster than he expected that getting rid of Freda won’t be as easy, especially if she’s not willing to part with any of her money.

But even Freda is surprised at his strange behavior when he refuses to open the bedroom in which he and Moni slept, or when, in the end, he maniacally admits that he did indeed murder Moni. Freda’s beside herself and admits that despite knowing that Teddy’s heart is dark, she still loved him. Teddy does get his comeuppance, or shall we say, justice is served but not in the courtroom.

Cast A Dark Shadow functions on several levels. First, we have the most obvious madness and evil of Teddy Bare. Bogarde brings out the terrorizing juxtaposition of incredibly handsome looks and sliminess of being a predator and user of older women (and eventually, a murderer). Gilbert’s use of light and dark has a film noir appeal but the script doesn’t permit that kind of aesthetic experience, at least not entirely. Not only does the dialogue move swiftly according to the rhythm dictated by a play (the film was based on a play, Murder Mistaken, by Janet Green), it also emphasizes British approach to noir.

Much like The Woman in Question (1950) and Victim (1961), there’s a griminess particular to the British film aesthetic underneath the pretense created by class division. Lewis Gilbert’s direction does tease out the class issues in Britain. This is particularly visible in Teddy’s movements and mannerisms. Bogarde is elegant, prim, and perfect in one instance (during the inquest he’s a picture-perfect husband), and rude, crude, and disregarding of others in another instance (his refusal to acknowledge Philip Mortimer’s presence and purposeful, in-your-face lack of manners aimed specifically at Mortimer).

Cast A Dark Shadow isn’t simply a tale about madness and purposefully enacted evil. Bogarde’s Teddy isn’t a clichéd maniac (as much as he laughs madly before meeting his own deserved destiny). Rather, we see a man who has indeed looked in the mirror, who knows he can’t escape himself, who’s intelligent enough to know that his actions are not only wrong but evil. Yet, despite this self-reflection and self-knowledge, Teddy chooses the dark self repeatedly. He doesn’t elicit pity or compassion. The inevitable descent brings closure but also an emptiness because Teddy Bare is a man devoid of Being.