Looking back at the Hollywood issue. 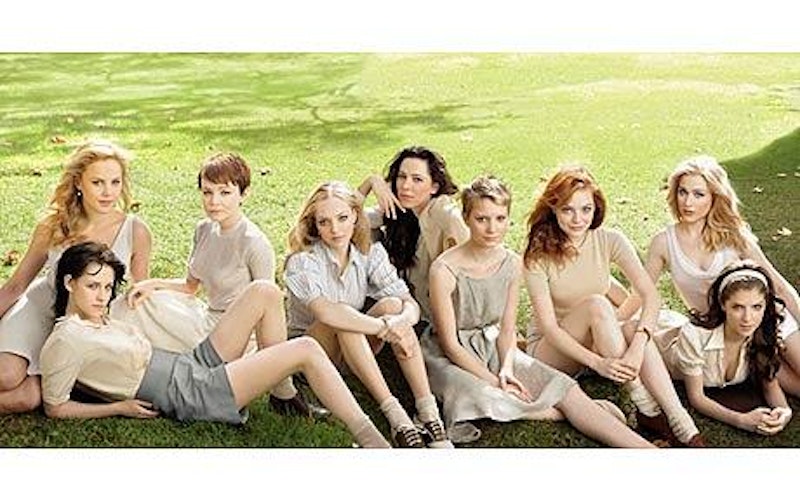 Ever since Vanity Fair wondered of Gretchen Mol “Is She Hollywood’s Next ‘It’ Girl?” on the front of its September 1998 issue (answer: Uh, no), the magazine’s had some difficulty figuring out how to splash Hollywood figures on its covers. (Mol, in case you were wondering, went on to play the titular 1950s striptease icon in The Notorious Bettie Page before finally downgrading, with similarly limited success, to character parts on TV series like Life on Mars and Boardwalk Empire.) There’s a finite number of current stars who can sell magazines, it seems, and as interest in frequent cover subjects like Nicole Kidman and Brad Pitt wanes, editor Graydon Carter can only shove Marilyn Monroe and Grace Kelly out there so many times per annum.

So its annual Hollywood Issue gives VF an excuse to trot out a bunch of young-ish A-listers (and putative names of the future). In this way, the magazine avoids any Mol-sized mishaps and gets at least a little buzz, though it’s usually more for whoever’s showing the most skin, as opposed to the publication’s perspicacity in crowning tomorrow’s stars today.

Thus the big news greeting yesterday’s revealing of this year’s model, which the magazine promises goes “back to the basics—no teenagers, no penguins, no (full-on) nudity, just the most exciting actors and actresses of the moment.” I suppose the success of this gambit depends on how “exciting” you find Jake Gyllenhaal at this late date.

There’s also a slight uptick in diversity, the lack of which VF took some heat last year. 2010’s edition was basically white girls on parade, while this year there’s actually one African-American (The Hurt Locker’s Anthony Mackie) and one half-white/half-African-American (Parks & Recreations’ Rashida Jones). This, in VF Land, is progress.

Abbie Cornish: Still best known for helping break up the Ryan Phillippe/Reese Witherspoon corporate merger, she was coming off of the largely unseen Stop-Loss (where she met Phillippe) and the completely unseen Bright Star. Her biggest hit to date is last year’s Legend of the Guardians, the animated owl battle movie. Mol rating: ****

Rebecca Hall: Coming off of Vicky Cristina Barcelona and Frost/Nixon, she added Please Give and The Town in ’10, and still has the Will Farrell flick Everything Must Go on the way. Mol: *

Anna Kendrick: Nailed an Oscar nom for Up in the Air, and was underused in Scott Pilgrim—but her existence in the Twilight universe muddies the picture. Mol: ***

Carey Mulligan: Feted everywhere for An Education, but since then has sunk under the weight of the Wall Street sequel and Never Let Me Go. Next up: Drive, with Ryan Gosling as a stuntman on the run after a heist gone wrong. Huh? Mol: ***

Amanda Seyfried: Parlayed Big Love and Mamma Mia! into a movie every other week: Jennifer’s Body, Letters to Juliet, Chloe, Dear John. But did anyone actually see any of those? Next is the “adult” version of Red Riding Hood: Intriguing, but it’s directed by Catherine (Twilight) Hardwicke. Mol: **

Emma Stone: Growing steadily, from Superbad to The House Bunny to Zombieland to Easy A. Currently has six movies listed as in production, including the Spider-Man reboot. Mol: *

Mia Wasikowska: The Kids Are All Right and Alice in Wonderland behind her, Jane Eyre and Gus van Sant’s Restless ahead. If only we could pronounce her name. Mol: *

Evan Rachel Wood: A string of flops longer than your arm, and the ongoing is-she/isn’t-she fucking Marilyn Manson doesn’t help. At least she bailed from Broadway’s Spider-Man… but now she’s doing supporting roles in True Blood and Mildred Pierce. When’s the next Hollywood Squares reboot? Mol: *****

As for this year’s VF models, we’ve got the already well-seasoned (Gyllenhaal, Ryan Reynolds, Anne Hathaway, James Franco), the interesting newcomers (Jennifer Lawrence of Winter’s Bone, Noomi Rapace of the original Girl with the Dragon Tattoo), the slow growers (Andrew Garfield, Garrett Hedlund, Mackie), the ones who could go either way (Jesse Eisenberg, Mila Kunis), and the head-scratchers. Rashida Jones is cute, but she’s not the reason anyone tunes into Parks & Rec; I still have trouble with which Olivia is Wilde and which one’s Munn (Munn’s the one with the really wide head, right?); and the inclusion of Robert Duvall—well, God forbid they actually give one of our greatest living actors a cover of his own.

Next month: Another Kennedy cover?