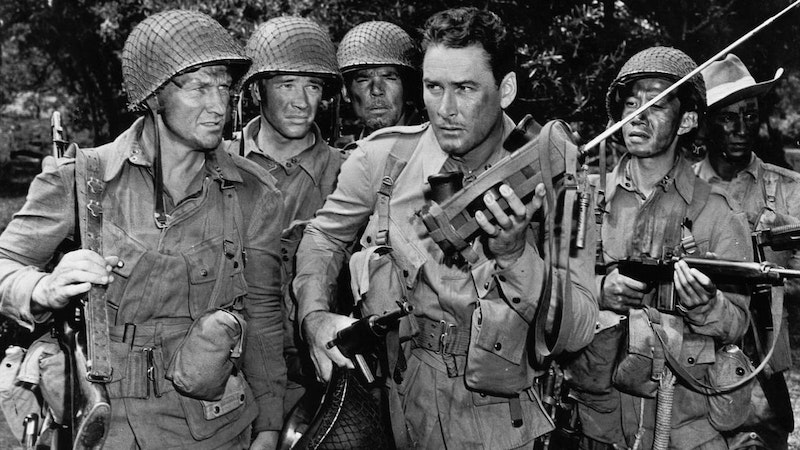 Errol Flynn died young, and like Cecil B. DeMille, in 1959: famous enough to remain in the lexicon, but without an enduring presence in pop culture. “In like Flynn” only stuck around because it sounds good—I doubt most people know who “Flynn” is today, if they even know the expression. DeMille, too, continues to be seen, but largely in Christian contexts, something for Turner Classic Movies (or major networks) to show during the holid—I mean Christmas. Right. Besides, DeMille’s endurance with the God-fearing, his style of filmmaking—massive productions with broad gestures, clunky dialogue, and viscous moralizing—is pretty close to a lot of contemporary popular cinema.

Fantasy worlds for fantasy people: this isn’t Objective, Burma!, Raoul Walsh’s excellent 1945 World War II film starring Flynn, who later said it was, “one of the few features of which I am proud.” Warner Archives just reissued the film, and for the first time on Blu-Ray, with a couple of contemporary short films (one featuring Ronald Reagan). Unlike Nervous Nellie Duke Wayne, Flynn did try to enlist in the war, but was rejected for having a number of serious health problems unusual for a man in his 30s. Besides tuberculosis, malaria, a bad heart, and bad back, Flynn was riddled with venereal diseases and, by the early 1940s, often too fucked up to work. But according to Walsh, Flynn was on his best behavior on Objective, Burma!, completely focused on camera and writing his memoirs during breaks. On that set, Flynn averaged only six drinks a day—“almost total abstention for him,” again, according to Walsh.

Unlike John Ford’s They Were Expendable, released the same year, Objective, Burma! isn't landlocked or ambivalent about a war that was still going on. Ford, head of the OSS Field Photographic Branch, knew the war was winding down when MGM implored him to come back to Hollywood to make his first commercially-released film in three years, starring none other than Wayne, who Ford bullied mercilessly for not serving until co-star Robert Montgomery, himself a veteran, told Ford off and made him cry. They Were Expendable is so much less exciting than Objective, Burma!, a film shot entirely in California that you could put it next to The Deer Hunter or even Apocalypse Now for “location” shooting. Walsh and his team made Topanga Canyon look like Burma, so much so that some veterans were convinced it was a location shoot.

Flynn heads a superb ensemble of 1940s character actors: George Tobias, James Brown, John Alvin, Henry Hull, Warner Anderson, and Henry Prince, among many others. There are no women in this movie, almost always a bad sign, but this is a no-bullshit affair: Olivia de Havilland has no place in Burma, 1945. Flynn isn’t going to get to kiss her this time. And unlike Walsh’s earlier They Died With Their Boots On, his role as Captain Nelson gives no room for the flamboyance of his General Custer, a peacock bent on personal glory and revenge. In Objective, Burma!, Flynn is just one among many other men, even if he’s the Captain. It’s the most understated and conflicted performance he ever gave.

As these men make their way north, horrors abound, but they have to keep moving. One gut-shot soldier, framed so only his legs are visible (one up, boots tied tight), begs another to kill him. “Do me a favor… please… kill me. Kill me… Just…” He dies. This is after the other guy freezes, immediately going back on his assurance that he’d do “anything” for his friend. The movie lets the characters and the audience off, but the way that scene is played, there’s little ambiguity that this is a situation that happened regularly, with much less romantic and dramatically convenient and clean circumstances.

Objective, Burma! is stark and unsentimental in a way unlike most other American war films, much less those made in 1944. After that gut-shot soldier dies, another survivor screams that the “Japs are all bastards,” and that we should “blow them all up… destroy them all… wipe them off the face of the Earth…” He says this through tears over the body of his friend, and again, nowhere in Classic Hollywood can you find anything as astringent and direct about the irreconcilable horror of modern war. Despite its closing crawl, imploring us that, “This story has an end, but no conclusion… not until Japanese forces are completely destroyed.” This is the prototypical “men on a mission movie,” a forward movement for 142 minutes that never drag: Walsh’s skills as a director action are better employed here than the “bigger” story of They Died With Their Boots On, likely because the latter operates in a fantasy world, despite being nominally based on the life of Custer.

The only “snub” of Objective, Burma! was a perceived lack of appreciation from Americans towards their compatriots in Britain. Winston Churchill—along with the British public—was enraged by a film they thought erased the largely British operation in Burma. At the London premiere in 1945, the entire audience walked out at the line, “We should head north, I hear there might be a few Brits somewhere over there.” Merrill’s Marauders may have been mostly British forces, but there were Americans, and this film only follows a handful (keep in mind that no British characters are depicted negatively, but this was all part of a larger resentment coming as the war was winding down and Americans were gloating).

Objective, Burma! Wasn’t made to get men to enlist, nor as desperate propaganda—Warner Brothers put it into production right after the six-month raid ended. This was money! And most of the movie stars were actually fighting in the war, and here you have a man that tried to go, couldn’t, couldn’t tell anyone about it (all studios refused to allow the public to know that Flynn’s health was compromised), and suffered the criticism and rancor of people who thought him yellow. The pain and the diminishment of all that is everywhere in Objective, Burma!, where for once, Flynn doesn’t stand out, intentionally or otherwise: he’s just there to do a job.