I didn't come to Lena Dunham's show prepared to like it. 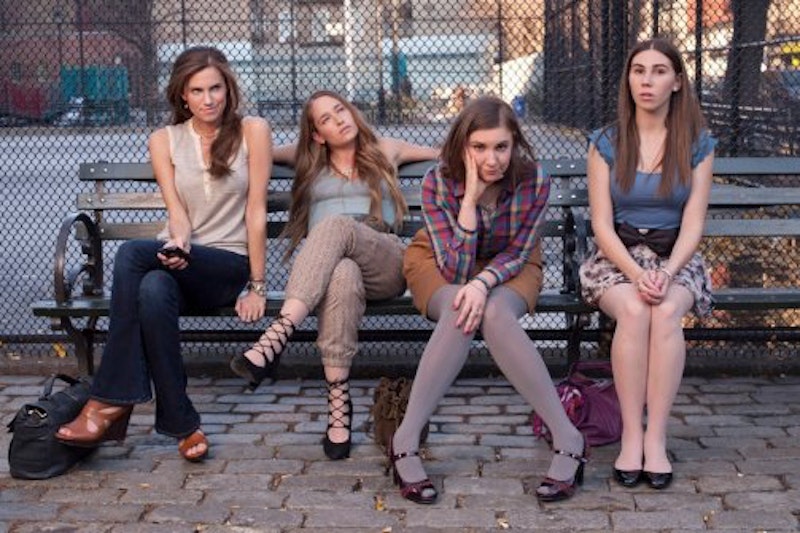 My feelings about Girls cannot be extricated from the circumstances under which I watched it, so it feels unfair not to disclose those circumstances. It was a Sunday afternoon, I was hungover, stoned, and couldn’t decide between ordering a pizza and going hungry because my phone was all the way across the room. The combination of headache, hunger, and the fact that I was attempting to watch the show via a website with the annoying problem of being both illegal and inconsistent, put me in a mood. Even worse, the only reason I was watching Girls at all was that I had finished the show I really wanted to watch, Planet Earth, which I love for the narrator's very British hyperbole. Everything is the greatest migration ever. The greatest migration ever of alabaster seals, the great migration ever of Conway lemmings, the greatest migration ever of your self-worth as you spend another five hours in the couch stage of the couch-to-5K you planned on completing by bathing suit season.

Girls is the product of Lena Dunham, who also stars in the show and, like her character, is mid-20s Oberlin grad who found herself under-employed and groundless after finishing college and moving to New York. Dunham is accompanied by three friends in her poor man's Sex in the City. These are not ladies who lunch nor even ladies who eat lunch—after being cut off by her parents in the first episode, Hannah says that she can afford to live in New York for three-and-a-half more days, seven if she skips lunch—but the characters somewhat mirror the Sex in the City quatro. There is neurotic Marina, sexy Jessa, prudish Shoshanna, and writer Hannah, as self-conscious on her MacBook as Carrie Bradshaw. Dunham would’ve been remiss not to acknowledge her forbearer in the single-woman-and-her-gal-pals-navigating-New-York sub-genre, and she does so most obviously through Shoshanna, whose studio apartment is decorated like a Suburban teens bedroom, complete with a Sex in the City poster above her trundle bed. Shoshanna tells her cousin Jessa that she's a Carrie with a bit of Samantha, but we can tell she's really a Charlotte.

Before I continue, a confession: maybe it's the circumstances under which the majority (read: all) of my television viewing takes place (read: stoned), but when I try to formulate on my own opinion about a show, I often find that I can scarcely determine what I'm watching, much less my own opinion of it. For this reason, I often supplement my opinions with those of others. While I sat on the couch yesterday, unsure if I enjoyed Girls enough to justify Project Free TV's interminable loading times, I texted a friend.

Her: "Yes. PASSIONATELY. And I don't even care that they are all white."

This friend (who really is a Carrie with a bit of Samantha) is an urbane former New Yorker with better taste than me, and so I figured she liked it enough to text in all caps, it was worth my time, which I was wasting anyway, and so I stayed on my couch for the rest of the afternoon and into the night as Lena Dunham and her girlfriends made New York life look not just not glamorous, but not even much fun. Today, with only a foggy memory of my breakfast five minutes ago, there are few things I clearly recall from my Girls marathon: 1.) Hannah's clothes (remarkably bad. Her dress for a date with a Midwestern pharmacist is a maroon velvet thing with a bow, like a third grader's Christmas outfit), 2.) The men, and 3.) Sex.

There isn't much worth saying about Number One other than it turns out all New Yorkers do not, in fact, dress well. As for Number Two, the most appealing man is Charlie, Marina's smothering college boyfriend, whose only butch quality is that he can weld a hammer and whose one moment of standing up for himself is when he reads from Hannah's diary during his band's performance. What is it like dating a man with a vagina, he reads, and you can see his panties get more and more knotted as he tries not to cry. While this may not seem especially appealing, Charlie is the only male character in the series who I would not move away from on public transit, and that's because he's cute.

The prize for Least Likable Male Character is split between Charlie's friend Ray, a barista with $50,000 in student loans who steals Hannah's diary in the first place, and Hannah's boyfriend Adam, who finds the company of his own penis more interesting than that of his girlfriend. Adam gets extra douche points for referring to Hannah as "kid," like he is her reluctant older mentor. The only thing Adam seems to contribute to Hannah's life is degrading sex, a lesson she brings into a sexual encounter with the Midwestern pharmacist, immediately defaulting into Adam's brand of kink and asking her new partner, "Am I tight like a baby?" Slightly—very slightly—less heinous is Jessa’s boss, whose only job seems to be growing his ponytail and lusting over the babysitter while his career-woman wife is off doing something unexplained but definitely more important. His charm comes from his awareness that that he is pathetic, but then he whines like his petulant daughter when the babysitter won’t bed him and even his fun little ponytail turns heinous.

On to Number Three. The sex in Girls is plentiful, graphic, and unpleasant. The only person who seems to be getting off consistently is Adam, but he scarcely needs a partner for it. Sex between Adam and Hannah is hard to watch—his dirty-talk incorporates incest and children—but harder to watch is Hannah's reaction to his bad behavior both in and out of bed: she puts up with it. The couple reminds me of Julia Roberts and Hugh Grant in Notting Hill: in both cases, you can't understand why the woman is into her co-star at all, the difference being that you never get the feeling that Hugh Grant belongs on the sex offenders list. The only sex that looks emotional is during a painful break-up between Marina and Charlie—ruined when Charlie turns into a vagina—and the only sex that looks pleasurable is between Marina and Jessa, ruined by the presence of a Wall Street-type with the two most obvious signs of moral failure: a $10,000 rug and a goatee.

I didn't come to Lena Dunham's show prepared to like it—I was, after all, in a mood—but I do like it. Dunham is smart, and even if her character has bad taste in both clothing and men, she’s smart too. Hannah tells her parents that she just may be the voice of her generation (or at least a voice of a generation) and, sadly, she may be. Not sadly because her voice isn’t worthy, but because the men in her fictional life are the worst of man: selfish, infantile, and utterly dependent on the very women they treat like shit. There are no men in my life like this—but then, there aren’t really any men in my life at all. I turned to my former New Yorker friend—who, unlike me, is naturally attracted to men and actually knows some—to ask her if this is what men in New York are really like.

Me: Is that what it's really like? The men are AWFUL. I can see why you moved.

Her: I have dated all of those men.

If my friend is right, if Dunham’s vision is what men really are like these days, I suspect it won’t be long until the greatest migration ever of New York women to lesbianism. And we’ll be here, us Mirandas, with open arms and plenty of room on the couch.